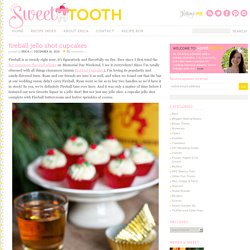 Ever since I first tried the hot cinnamon-flavored whisky on Memorial Day Weekend, I see it everywhere! Since I’m totally obsessed with all things cinnamon (mmm Red Hot Cupcakes), I’m loving its popularity and candy-flavored burn. Ryan and our friends are into it as well, and when we found out that the bar at our wedding venue didn’t carry Fireball, Ryan went so far as to buy two handles so we’d have it in stock! 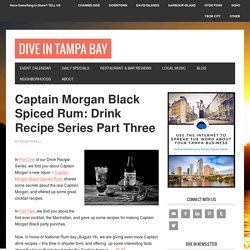 In Part Two, we told you about the first ever cocktail, the Manhattan, and gave up some recipes for making Captain Morgan Black party punches. Now, in honor of National Rum day (August 16), we are giving even more Captain drink recipes – this time in shooter form, and offering up some interesting facts about the liquor that helped make the Captain famous —- RUM. The Real Deal with Rum How it’s made: Rum is made from molasses and water or cane juice and water. The mixture is fermented with yeast for a period ranging from one day to up to several weeks, distilled then sometimes aged in a barrel. How it’s classified: The different styles of making rum produces different flavors of rum which include: Where it comes from: The Caribbean produces the most rum in the world. Mixed Drinks and Cocktail Recipes. Drink Recipes at Bar None Drinks. Welcome to the Bar None Drink Recipes drink index. 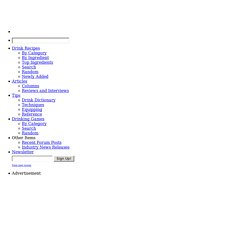 This is the meat of our site; a listing of thousands of drink recipes. There are several ways to access this information, listed below: By Category This allows you to navigate based on whether you want a cocktail, shooter, punch, etc. By Ingredient Got a bottle of Crown Royal you don't know what to do with? Search This is one of the best ways of finding the drink that elludes you.

Top Ingredients This is a listing of ingredient by the frequency with which they appear in drinks. Tastes like Heaven, Burns like Hell What happens next is up to You. Drink Recipes at Bar None Drinks. Luscious Slush Punch Recipe. Green Punch Recipe. 50 Smoothies : Recipes and Cooking. 1. 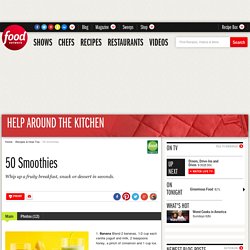 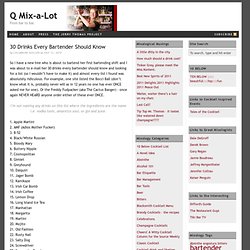 For example, one site listed the Bocci Ball (don’t know what it is, probably never will as in 12 years no one has ever ONCE asked me for one). Or the Freddy Fudpacker (aka The Cactus Banger) – once again NEVER HEARD anyone order either of these ever ONCE. I’m not naming any drinks on this list where the ingredients are the name i.e. vodka tonic, amaretto sour, or gin and juice. 1. Apple Martini 2. How To Make the Top Cocktails Every Bartender Should Know Apple Martini I hate to even put this on the list, but it is a cocktail that I get an order for at least once a weekend. 3 oz Apple Pucker, 2 oz Vodka, (can add 1 oz fresh lime sour if you happen to have something like that in your bar) shake and serve up with a bright red maraschino cherry. Alcoholic Soaked Gummy Bears. 10 Jello Shots Worth the Hangover. Jelly Shot Test Kitchen. The Original Caramel Apple Jello Shots [With Real Apples] Can you believe I actually spend time trying to figure out what kinds of food could be used as a vessel for jello shots? 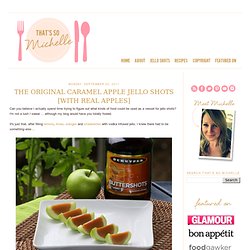 I'm not a lush I swear ... although my blog would have you totally fooled. It's just that, after filling lemons, limes, oranges and strawberries with vodka infused jello, I knew there had to be something else ... So we tried apples... and guess what? YUM. Especially with my caramel flavored butterscotch schnapps jello. (If you wanted something with a little bit more alcohol content you could always try them out with Van Gogh Dutch Caramel Vodka instead of butterscotch schnapps) Or for a kid friendly, non-alcoholic version just use cold water mixed with two tablespoons of caramel syrup instead of butterscotch schnapps or vodka!

1. 2. 3. 4. 5. 6. Jolly Rancher Vodka Tutorial. 21st Birthday Shots That Taste Good: Recipes to Celebrate the Big Two-One Without Making You Sick. Face it, on their 21st birthday, most people celebrate by going out and having a few drinks. 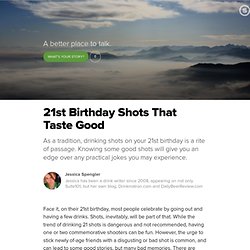 Shots, inevitably, will be part of that. While the trend of drinking 21 shots is dangerous and not recommended, having one or two commemorative shooters can be fun. However, the urge to stick newly of-age friends with a disgusting or bad shot is common, and can lead to some good stories, but many bad memories. Lava Lamps Recipe.