9-23 août 2021 Les scientifiques du GIEC : « Le changement climatique s’accélère et s’intensifie » 13 août 2021 Fearing Government Whitewash, Scientists Leak Draft IPCC Report Urging Bold Emission Cuts. Concerned that aspects of its conclusions will be diluted by policymakers, a group of scientists has leaked a draft of a forthcoming IPCC report, which argues that to avert further climate chaos, global carbon emissions must peak by 2025 and all fossil fuel plants worldwide must be shuttered by the end of the decade. 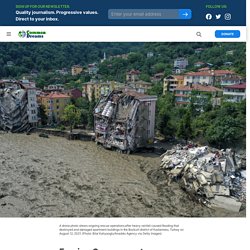 "There is no point for us to just observe what a disaster is unfolding if nobody is doing anything about it. "—Sonia Seneviratne, ETH Zurich. "This Was Avoidable," Climate Activists Say About Apocalyptic UN Climate Report. The United Nations COP 26 climate summit this November was already set to be one of the most important diplomatic gatherings in history, a meeting where world leaders will, without exaggeration, decide the future of life on earth. 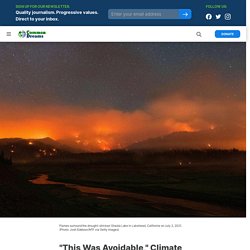 In a landmark report released Monday by the UN Intergovernmental Panel on Climate Change (IPCC), some of the world's foremost climate scientists added further urgency to the summit by clarifying that limiting global warming to 1.5 degrees Celsius (2.7 degrees Fahrenheit), as envisioned in the Paris Agreement signed at the last major climate summit in 2015, is imperative.

Temperatures have already risen by 1.1 degrees C; current trends point to a rise of a ruinous 3 degrees C later this century. "If [President Joe] Biden really wants to be a world leader on climate, he'll heed this call and pass the boldest reconciliation bill possible. … Anything less … is ignoring science, ignoring the IPCC report, and failing our generation. " 12 août 2021 The UN report is scaring people. But what if fear isn't enough? It had the feeling of a scheduled fire drill. 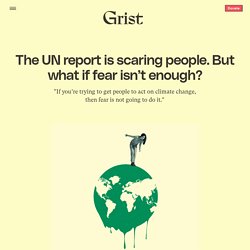 The release of a long-awaited report by the Intergovernmental Panel on Climate Change on Monday was met with appropriate alarm. The BBC warned that this was “code red for humanity.” The New York Times wrote, “A Hotter Future Is Certain.” A Guardian headline stated that major changes to the climate were “inevitable” and “irreversible.” Compared to previous versions, the latest U.N. report was unique in its emphasis on climate “tipping points” and used the most conclusive language about the state of climate science to date. 10 aug. 2021 UN report places new emphasis on climate tipping points. The Intergovernmental Panel on Climate Change released its sixth report on the science of climate change Monday, and the United Nations is calling the conclusions a “code red for humanity.” 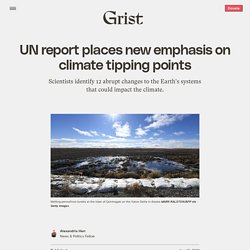 The science is clear: Atmospheric carbon dioxide is higher than it has been in 2 million years, the earth is hotter than it has been for at least 2,000 years, and sea levels are rising faster than in the last 3,000 years. The planet will keep heating up, the report says, but by exactly how much depends on future emissions tied to human activity. A lot of those findings echo past reports — including the 2018 special report on the potential impacts of 1.5 degrees Celsius (2.7 degrees Fahrenheit) of warming when compared to pre-industrial levels. 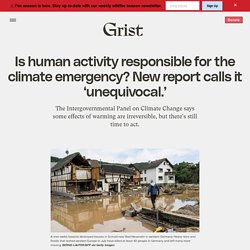 “​​It is unequivocal.” Those stark three words are the first in the Intergovernmental Panel on Climate Change’s new report. The climate crisis is unequivocally caused by human activities and is unequivocally affecting every corner of the planet’s land, air and sea already. The report, produced by hundreds of the world’s top scientists, with sign off by all the world’s governments, concludes that it could get far worse if the slim chance remaining to avert heating above 1.5 degrees Celsius (2.7 degrees Fahrenheit) is not immediately grasped.