Why 26 Korean words have been added to Oxford English Dictionary. Pandemic, lockdown and Megxit: the most influential words of 2020. How do we get new words and how do old words get a fresh twist? 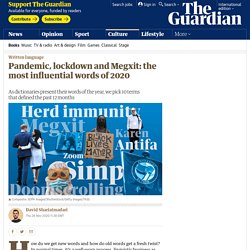 In normal times, it’s a well-worn process, linguistic business as usual. There will be a new invention or thing to buy, such as “wifi” (1999) or an “iPod” (2001). People will pick up on trends or changes in behaviour and give them labels such as “crowdfund” (2008) or “catfish” (2012). OED Word of the Year expanded for 'unprecedented' 2020. Oxford English Dictionary expands to reflect ‘extraordinary’ pandemic. © Ian Nicholson The OED has seen a ‘significant update’ (Ian Nicholson/PA) 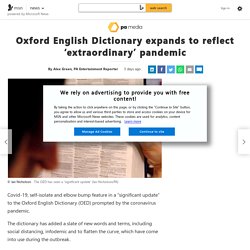 The point of dictionaries is to describe how language is used, not to police it. Protests against dictionaries are nothing new. 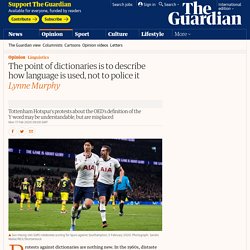 In the 1960s, distaste for the treatment of “non-standard” vocabulary such as “ain’t” in Merriam-Webster’s Third International Dictionary was so vociferous that a hostile takeover of the company was attempted, and after that failed a competitor dictionary was founded. The price of used copies of the 1934 Second International Dictionary skyrocketed as customers rejected the dictionary’s approach to controversial usages. 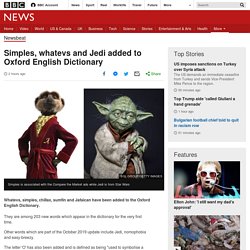 They are among 203 new words which appear in the dictionary for the very first time. Other words which are part of the October 2019 update include Jedi, nomophobia and easy-breezy. The letter 'O' has also been added and is defined as being "used to symbolise a hug especially at the end of a letter or greetings card". Here are just some of the words that have been added to the latest update: chewy, n.: Chewing gum; a piece of chewing gum.chillax, v.: intransitive. The full list is available on the Oxford English Dictionary (OED) website. Oxford English Dictionary adds new entries: chuddies, jibbons and fantoosh. English speakers from around the world have flocked to help the Oxford English Dictionary expand its coverage of regional vocabulary, with a new update including suggestions such as jibbons, chuddies and sitooterie. 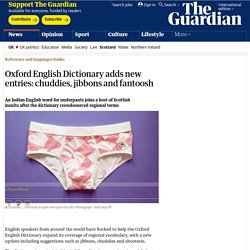 The dictionary launched its Words Where You Are appeal to the public last year to mark the 90th anniversary of the completion of its first edition. The regional vocabulary suggestions which have poured in from readers ever since span the globe, from the Welsh English term for spring onions, “jibbons”, to the name for the regional dialect heard in New Orleans, “Yat”, which is derived from the greeting: “Where y’at?” 'Single-use' named 2018 word of the year. Single-use, a term referring to products – often made of plastic –that are made to be used once and thrown away, has been named Collins Dictionary’s word of the year for 2018. 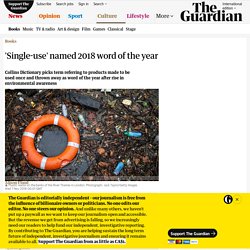 Collins, whose lexicographers monitor a 4.5bn-word corpus to come up with an annual list of new and notable words, said images such as those seen in the BBC’s Blue Planet II, in which albatrosses unwittingly feed their chicks plastic, had contributed to the increased usage of the term single-use. It also pointed to increased public awareness of the problems that single-use products bring. The European parliament recently backed a ban on single-use plastics such as straws, cotton swabs, disposable plates and bottles and cutlery; it is expected to come into effect in 2021. The UK is also planning to introduce a tax on plastic packaging. 'Woke' and 'post-truth' added to Oxford English Dictionary - BBC Newsbeat. A Merriam-Webster Dictionary Writer Explains How She Interprets and Describes the English Language. Yolo! How do they choose new words for the Oxford English Dictionary? 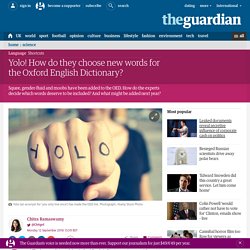 The latest edition of the Oxford English Dictionary is out, with 1,200 new words and 1,000 revised entries for us to geek out about. Squee – an exclamation expressing delight or excitement – has made the list, along with Yolo (an acronym for ‘you only live once’), moobs, gender-fluid, uptalk (a manner of speaking in which declarative sentences are uttered with rising intonation at the end) and Westminster bubble. Who picks the new additions? Is that a word? 4 reasons why the English language is bigger than you think. Is YOLO a word? 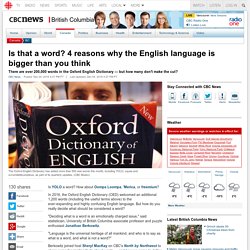 How about Oompa Loompa, 'Merica, or freemium? In 2016, the Oxford English Dictionary (OED) welcomed an additional 1,200 words (including the useful terms above) to the ever-expanding and highly confusing English language. But how do you really decide what should be considered a word? "Deciding what is a word is an emotionally charged issue," said statistician, University of British Columbia associate professor and puzzle enthusiast Jonathan Berkowitz. "Language is the universal heritage of all mankind, and who is to say as what is a word, and what is not a word? " Berkowitz joined host Sheryl MacKay on CBC's North by Northwest to share some fascinating facts about words — and how we come to define them. Oxford Dictionaries Word of the Year 2016 is... Post-truth adjective Relating to or denoting circumstances in which objective facts are less influential in shaping public opinion than appeals to emotion and personal belief. 16 November 2016, Oxford, UK: Today, Oxford Dictionaries announces post-truth as its 2016 international Word of the Year. 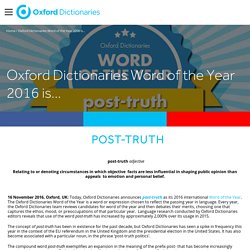 The Oxford Dictionaries Word of the Year is a word or expression chosen to reflect the passing year in language. Every year, the Oxford Dictionaries team reviews candidates for word of the year and then debates their merits, choosing one that captures the ethos, mood, or preoccupations of that particular year. Language research conducted by Oxford Dictionaries editors reveals that use of the word post-truth has increased by approximately 2,000% over its usage in 2015.

The compound word post-truth exemplifies an expansion in the meaning of the prefix post- that has become increasingly prominent in recent years. Bantz, brain fart and awesomesauce: New words added to Oxford dictionary online - Home News - UK - The Independent. Prepare to brush up on your vocabulary as a host of new words have been included in an online dictionary. 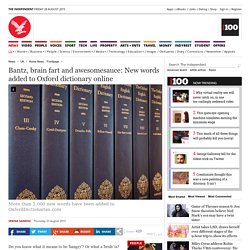 Hangry, which means to be bad-tempered as a result of hunger, and bruh, a word used to denote a male friend, are just two of more than 1,000 words that have been added to OxfordDictionaries.com in a quarterly update. READ MORE:The Top Ten: Nouns that are always pluralPortobello, 99 ice creams, and Britain's Lost Seaside Heritage: The sweet taste of successGender neutral honorific Mx 'to be included' in the Oxford English Dictionary alongside Mr, Ms and Mrs and Miss Other words include manspreading, when men position their legs wide apart to encroach on adjacent seats when travelling on public transport, rando, a name for an odd unknown person, and fat-shame, which means to mock somebody about their size. News terms Brexit and Grexit - words used for the United Kingdom’s hypothetical exit from the EU and Greece’s potential exit from the Eurozone - were also included in the dictionary.

Oxford Junior Dictionary Drops "Acorn" for "Broadband" In the early nineteen-sixties, a passel of newspapers and magazines mounted a cultural jihad against a dictionary. The book in question was Webster’s Third New International Dictionary, Unabridged, published by what was then the G. & C. Merriam Company. Its great offense was permissiveness. The Third, critics asserted, sanctioned scores of words—“finalize,” “irregardless,” “wise up,” “hepcat,” “ain’t”—without the ruler on the knuckles they deserved, labels such as “colloquial,” “erroneous,” “incorrect,” or “illiterate.” 'Manspreading' added to online dictionary - BBC News. The act of "manspreading", or sitting with legs wide apart on public transport, is among 1,000 new words to enter the online Oxford dictionary. OxfordDictionaries.com issues quarterly updates on current definitions of English words. Other new entries include Grexit, Brexit, hangry, beer and wine o'clock and NBD - meaning "no big deal".

Oxford Dictionaries said the addition of multiple slang words showed "creative" use of language. New words and phrases are added to the website once editors have enough independent evidence to be confident of their widespread currency in English. However, they do not gain an entry into the Oxford English Dictionary unless there is a demonstration of continued historical use. According to Oxford Dictionary's language monitoring service, hangry has seen its usage increase since 2012, with a spike in April 2014 connected to an American study about low glucose levels making people cross.

How do new words get added to Oxford Dictionaries? Thousands of new words added to Scrabble dictionary - BBC News. Thousands of new words - including slang terms lolz, shizzle and obvs - have been added to the latest Scrabble word list, its publisher has said. About 6,500 words have been added to the latest Collins Scrabble Word List, including a number of slang terms used on social media and in text messages. New words include twerking, emoji, bezzy and ridic - short for ridiculous. One the highest scoring new entries is quinzhee - an Inuit snow shelter - which scores 29 Scrabble points. Mamils and silvertails in the dictionary?

Mamil, (middle-aged man in Lycra), silvertail (a person who is socially prominent or who displays social aspirations) and crony capitalism are among the 1,000 new words to be added to OxfordDictionaries.com, the free online dictionary, in its largest ever quarterly update. The entries by editors at Oxford Dictionaries reflect the influence of popular culture, or teenspeak, and include abbreviations such as WTAF (what the actual fuck), lolcat (a picture of a cat with a humorous caption), IDC (I don’t care) and PMSL (pissing myself laughing). Words from gaming terminology include respawn (a character in a video game who reappears after dying) and permadeath (one who does not reappear). OxfordDictionaries.com has extended its coverage of Australian English terms, a particularly rich source of slang. In addition to silvertail, there is shiny bum (office worker), ant’s pants (an outstandingly good person or thing), and sticker licker (an issuer of parking fines).

Fone, n.: (informal) a phone. Vape is the new selfie: what the 2014 word of the year says about our times. Lindsay Lohan, Katy Perry, Barry Manilow and Ronnie Wood all do it, and now it’s Oxford Dictionaries’ word of the year. Vape: to suck on an electronic cigarette. If you vape, you are a “vaper” (for obvious reasons, no one thought “vapist” was a good idea); and the act of doing so – perhaps in a “vaporium” – is “vaping”. (In fact, “vaping” was coined as long ago as 1983, when such devices were as yet a pipe-dream.) Associated vape-vocab noticed by Oxford includes “e-cigarette”, “e-juice” (the nicotinous liquid inside), and the pleasing retrospective formation “tobacco cigarette”, so people will know what you mean when referring to what used to be just a “cigarette”. Technically, this is called a retronym, as when people began to say “landline” when mobile phones were invented; or when restaurants began to offer “hen’s eggs” once foodists had moved on to scoffing the eggs of ostriches and probably ants.

A few years’ perspective also makes other UK winners seem dangerously dated already. 'Vape' is the word of the year. ‘Overshare’ is Chambers Dictionary’s word of the year 2014. Omnishambles beats Eurogeddon, Gif and Mobot as Oxford word of the year. With the BBC embroiled in a crisis of its own making and the British government showing itself to be gaffe-prone, it is perhaps appropriate that Oxford Dictionaries' word of the year is omnishambles.