Interesting Podcasts you have chosen

CBC Listen. Button Poetry. PowerfulJRE. Podcast. Nerdist Podcast. Lindsay Ellis. The Blindboy Podcast on acast. 30 of the best podcasts in 2017 for curious minds. Wilma Podcasts are more popular than ever. 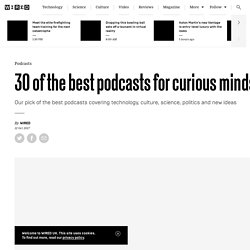 Thanks to 2014's podcasting hit Serial everyone who owns a mixing desk and a microphone has started to create their own. Sometimes the choice of what to listen to can be overwhelming. To help you out here's WIRED's guide to the podcasts you should be listening to. Podcast of the week: Tomorrow’s World This new podcast from the BBC explores the biggest questions in science and technology today, and (true to its nostalgic name) takes us through the world of tomorrow. Culture How Did This Get Made? Have you ever sat through a movie so terrible that you genuinely don't understand how it can exist? If you enjoy poking fun at ridiculous films, this is for you.

The Dollop The Dollop with Dave Anthony and Gareth Reynolds is the most fun you will ever have during a history lesson. Listen to this podcast if you're greedy for some often surprising knowledge but need satire and laughter too. Spirits: A Drunken Dive into Myths and Legends Code Switch The Tip Off. Should You Podcast with a Cohost? The Art and Craft of Storytelling. S-Town Podcast. WTF with Marc Maron Podcast. Vimeo Podcast EP 14: Match sounds to edit with BRTHR. RTÉ Radio 1: Documentary on One.

Flesh has turned itself to stone or dust by Earlid. The Life of a Song: War. The Life of a Song: Smells Like Teen Spirit. Sound narrative. Angles, Time, Perspectives is a 5:00 multilayered sound art narrative providing a soundscape of travel over time and distance, a choral created from seemingly disconnected sound sources at my travel destination, and a sonic portrait of how the angles of tomorrow, today, and yesterday collide to provide interesting perspectives. 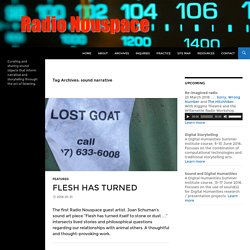 Lore. Everyone's Upstairs Neighbors. Performing Arts - Podcasts Downloads. Is podcasting still relevant? - Ashley Milne-Tyte. March 15, 2013 (Photo: M Keefe, Creative Commons license) Earlier today I was going back and forth on email with a professional contact and friend about the radio entries in a journalism competition we were both connected to. The topic started out being about the dearth of entries in the radio category, which was disappointing, but then the discussion moved on to podcasting and whether podcasts were permitted to be entrants in this particular competition (they were). 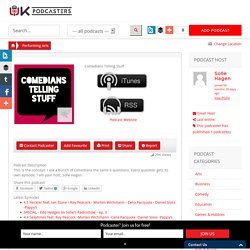 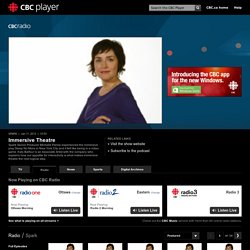 Audio Spark Can an A.I program be a criminal? Jan 18, 2015 | 14:12Recently we've seen examples of bots that can buy illegal substances online or that spit out defamatory tweets. BBC Radio 3 - Night Waves, American Pyscho, Roosevelt, Medieval Christmas, British Architects. Come To Papa. Revolutions Per Minute. Listen to episodes of Welcome to Night Vale on podbay. Remember podcasting? It's back - and booming.

LOS ANGELES — Shane Dawson produces videos for YouTube, where his homegrown productions have received more than 2 billion views. With a huge online audience devouring his every video move, what's he doing dabbling in audio? "I love podcasts, so I thought I'd try one," says Dawson of his recently launched hour-long Shane & Friends .

"I wasn't sure my audience would be up for it, but shockingly, they really love it. It proves the next generation is excited about long-form content. " Dawson isn't the only video star to give online audio a try. Apple just surpassed 1 billion subscriptions for podcasts via its iTunes app, which is a major milestone for a category that had been considered an also-ran. BBC Radio 4 - The Reith Lectures, Grayson Perry: Playing to the Gallery: 2013, Democracy Has Bad Taste. NT 50: Richard Eyre and Julie Walters in conversation. r3arts_20140116-2300c.

Matthew Sweet is interviewing Steve McQueen the director of '12 Years A Slave'. They talk about the new movie and the issues surrounding it. They also assess this years Oscar nominations ie 'Wolf of Wall Street' and 'Gravity'. Later on in the podcast, we hear from historian Madge Dresser, poet Fred D'Aguiar and anthropologist Kit Davis all discussing the film and slavery. I feel this is an intriguing podcast to listen to as it is relevant to whats happening in the media with this film's new release and the intense discussion of slavery which is some what a taboo in society today. – hannahkelly