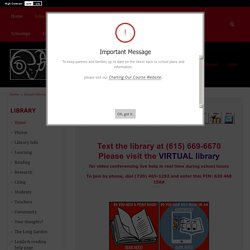 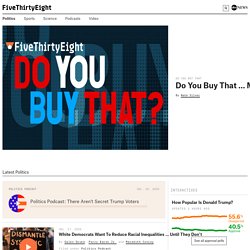 Podcasts – FiveThirtyEight. ‎Slay In Your Lane: The Podcast on Apple Podcasts. 25 JUN 2020 How We Wrote the Book: Inspiration and Idea Generation Introducing How We Wrote the Book, a miniseries from Yomi and Elizabeth guiding you through the processes and practicalities of how to write a bestseller. 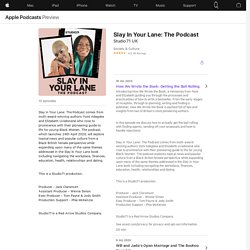 From the early stages of inception, through to planning, writing and finding a publisher, How We Wrote the Book is packed full of tips and insights from two of Britain's most pioneering authors. In this episode we discuss inspiration and idea generation; from the formation of an idea, to recognising your strong points and teaming up with someone, to knowing when your idea is a good one. Witness History: Witness Black History. ‎Intersectionality Matters! on Apple Podcasts. 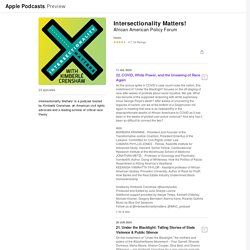 India Kager: A Mother's Story of Loss & Erasure On September 5, 2015, India Kager and Angelo Perry drove to Virginia Beach to introduce their 4-month-old baby Roman, to Angelo’s family. Unbeknownst to them, Virginia Beach police were tailing their car and while India, Angelo, and Roman were parked at 7/11, a SWAT team threw a flash bang grenade and opened fire on their car. 4 officers fired over 51 rifle rounds into India’s car, while baby Roman sat in the back seat, killing Angelo and India within seconds. Virginia Beach police Chief Jim Cervera would later say India’s killing was an accident. All My Relations. ‎About Race with Reni Eddo-Lodge on Apple Podcasts. 16 MAY 2018 9: The Big Question Reni has been asked this question numerous times but is she who you should ask? 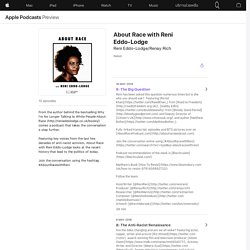 You're Wrong About. WTF with Marc Maron Podcast. Without Fail. While Black. -podcast. The Weeds Podcast. WeCrashed: The Rise and Fall of WeWork - Wondery - Feel The Story. Wait Wait...Don't Tell Me! : NPR. Morning Edition : NPR. The United States of Anxiety: Season 4. Truth Be Told. Tonya Mosley has always been fascinated by stories that illustrate the complexities of the human condition. 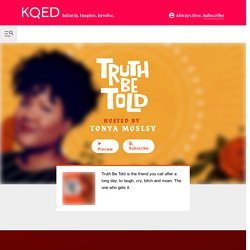 When she was a kid, a friend’s father nicknamed her "Scoop. " It was the perfect name for what Tonya would one day become. As a journalist, Tonya has used her curiosity and tenacity to find and expose truths for the greater good of society. Tonya currently serves as the co-host of Here & Now, a daily national newsmagazine show reaching 4.5 million people every week. Prior to Hear & Now, Tonya served as the Silicon Valley bureau chief for KQED, leading a team of journalists covering the impacts of technology companies on society, and prior to that as a television correspondent for Al Jazeera America and reporter and anchor in several cities throughout the country. Tonya has won several national awards for her work, including an Emmy Award in 2016 for her televised piece "Beyond Ferguson," and a national Edward R. Trailblazers with Walter Isaacson. 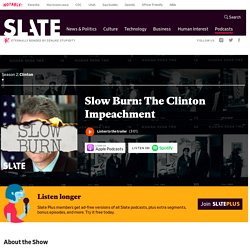 Whether you’re well-versed in the tale of Clinton and Monica Lewinsky, or you’re fuzzy on the details, this season of Slow Burn will take you further into the story than you’ve ever been. From its origins in the Whitewater real estate controversy, the Paula Jones sexual harassment lawsuit, and the suicide of Vince Foster, Clinton’s near-removal from office was the culmination of a process that remains poorly understood—and continues to reverberate through our political system today. While Season I of Slow Burn captured what it was like to live through Watergate, Season II offers a fresh reexamination of the choices, circumstances, and manipulations that nearly destroyed the 42nd president and forever changed the life of a former White House intern. Slow Burn: Season 3. Sick - Pocket Casts. The Shrink Next Door - Wondery - Feel The Story. Short Wave : NPR. 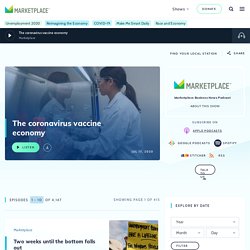 Through stories, conversations and newsworthy developments, we help listeners understand the economic world around them. Marketplace makes sense of the economy for everyone, no econ degree or finance background required. Marketplace doesn’t just report on the numbers, we take it deeper, adding context to what’s happening in the stock market and how macroeconomic policy can affect you and your business. Monday through Friday, our team speaks with a wide range of industry professionals-- from small business owners to Fortune 500 CEOs, Marketplace breaks down complex topics related to business and the economy without industry jargon and over complicated explanations. 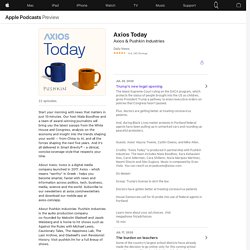 This is just the latest step in President Trump's war on public health experts. Plus, a shakeup on Trump's 2020 campaign team. And, a major Twitter hack Wednesday night left some of the most powerful people on the platform vulnerable to a cryptocurrency scam. Guests: Axios' Sam Baker, Mike Allen, and Ina Fried. Pod Save America Archives. 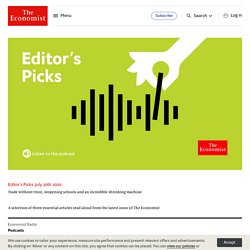 Checks and Balance - “Checks and Balance”—our weekly podcast on American politics. THE SIGNIFICANCE of the 2020 election in America was clear well before covid-19 hit. Americans will now be delivering a verdict on a transformative president amid the gravest crisis for generations. The Economist’s newest podcast, “Checks and Balance” launched as the crisis took hold. Our US Editor John Prideaux hosts, together with Charlotte Howard, New York bureau chief, and Washington correspondent Jon Fasman.