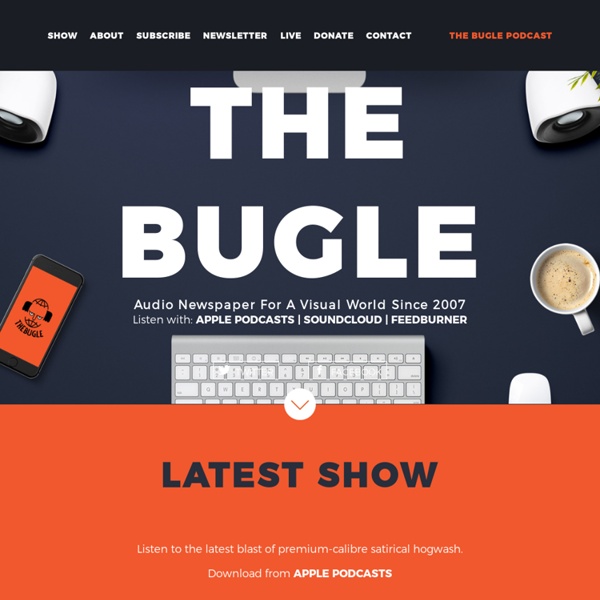 mechBgon's guide for first-time newbie PC builders Welcome, newbies! : ) Here's a photo guide to the mechanical assembly of a computer. I realize the hardware shown in this guide is obsolete now, but the core knowledge is the same, so roll with it. What parts should I buy? Check out the AnandTech Forums' General Hardware section, where many people get advice on what parts to choose. You're totally welcome to join the Forums and post your own request for advice. What tools will I need? #2 Phillips (+) screwdriver medium-sized flat-blade screwdriver small adjustable wrench utility knife small flashlight/torch possibly a pizza cutter Who is this guide intended for? However, I won't be held responsible if you buy stuff that doesn't work; or doesn't work together; or you assemble it and it self-destructs; or any other consequence. Click here, and let's get started! Advertisement I have just one advertisement, so pay attention!

The Pod Delusion | A Radio Show & Podcast About Interesting Things Hi gang, After nearly five years, we’ve decided to take a break from our weekly programmes here at The Pod Delusion. The reason for this change is fairly predictable: The two of us (James and Liz) are simply too busy – and are struggling to fit producing an hour of audio every week into a schedule where we also have other voluntary commitments, let alone a need to earn a living! So rather than let the show suffer as a result, we’ve decided the best thing to do is to take a brief pause. To reflect for a brief moment, it has been an incredible half decade. It has been amazing, but like I say, exhausting. We’d obviously like to take this opportunity to thank everyone who has supported the show – there’s far too many contributors to name individually, but without your contributions the show would be nothing. Worry not though – this is very definitely not the end, and is more of a break to catch our breath. In the meantime, you can find me (James) on Twitter, YouTube, and my personal website.

Do The Right Thing - Podcasts DO THE RIGHT THING is the live audience comedy panel show podcast where the teams must work out the right thing to do in any given situation. One minute they're guessing what to do if they find themselves buried alive, the next they're agony-aunting someone whose cat is a bit stand-offish. It is hosted by Danielle Ward (Dave Gorman's Absolute Radio show, Karaoke Circus) with team captains Michael Legge (Chortle Award winning angry man) and Margaret Cabourn-Smith (Psychoville, Peep Show, Miranda). Lucy Porter and Simon Munnery are on board for the final episode in Series 4. If you enjoy the show, then help us get it to new ears (i.e. tell people about it). Scroll down to listen to past episodes, take the DTRT quiz here, and take a look at the picture of all the guests. Previous Episodes Do The Right Thing is co-devised by Fuzz Productions - producers of Pappy's Flatshare Slamdown and the award-winning Richard Herring: As It Occurs To Me.

Home Probably the Best Free Security List in the World Security List Index Select a Security Category: All Items Keys Discontinued or not updated recently (for at least three years). Item links to a Gizmo's Freeware 'Best Free' page. Item or this icon links to a Gizmo's Freeware page. Web application. Browsers: FF = Firefox; Ch = Chrome; IE = Internet Explorer; OB = Other browsers; AB = All browsers. About This list (earlier "Probably the Best Free Security List in the World") contains thousands of links to free security-related Windows desktop applications and web applications, with the goal of listing everything available that's not malicious or of low usefulness. Use the Windows desktop applications or web applications on this list at your discretion. We periodically check all links on this list with Web of Trust. Use the comments section below, or this (or this) forum thread, to let us know about issues, or suggestions for items that could be added to the list. Related Links Editor This list is maintained by volunteer editor ako (Antti Koponen)

16 Things I Wish They Had Taught Me in School I am 28 now. I don’t think about the past or regret things much these days. But sometimes I wish that I had known some of things I have learned over the last few years a bit earlier. That perhaps there had been a self-improvement class in school. And in some ways there probably was. Because some of these 16 things in this article a teacher probably spoke about in class. Some of it would probably not have stuck in my mind anyway. But I still think that taking a few hours from all those German language classes and use them for some personal development classes would have been a good idea. So here are 16 things I wish they had taught me in school (or I just would like to have known about earlier). 1. This is one of the best ways to make better use of your time. So a lot of what you do is probably not as useful or even necessary to do as you may think. You can just drop – or vastly decrease the time you spend on – a whole bunch of things. 2. You can do things quicker than you think. 3. 4. 5.

Podcast | Sodajerker Episode 48 – Rickie Lee Jones Singer-songwriter Rickie Lee Jones chats with Simon and Brian about the writing of songs like ‘Chuck E’s in Love’, ‘The Last Chance Texaco’, ‘Coolsville’, ‘Weasel and the White Boys Cool’, ‘Skeletons’ and ‘The Evening of My Best Day’. Rickie talks in detail about her approach to constructing lyrical flow, her recent covers album The Devil You Know, and her plans for a new album of original material, which you can now pledge to support. Read more Episode 47 – Linda Thompson British folk singer Linda Thompson joins Simon and Brian to talk about the writing of her new solo album Won’t Be Long Now. Read more Episode 46 – Ron Sexsmith

24 Invaluable Skills To Learn For Free Online This Year 21 Essential Podcasts To Download Today 1 | Sodajerker On Songwriting One thing you learn from podcasts is that, freed from a cramped radio slot and faced with someone who actually knows a bit about their subject, almost everyone has a fascinating story to tell. Scouse songwriting duo Simon Barber and Brian O'Connor set up Sodajerker just as an excuse to talk to their heroes about what it's like to put songs together. But their natural inquisitiveness brings out the best in legends including Andy Partridge of XTC, Mike Stoller and Johnny Marr, making Sodajerker one of the most unusual and rewarding music podcasts. 2 | Stuff You Should Know There is, let's face it, a hell of a lot of stuff that we should know about but don't. 3 | Real Time With Bill Maher This one, meanwhile, is Have I Got News For You with a metric shitload more swearing plus a little more bite and viciousness than "Gosh, isn't Ed Miliband's voice funny?" 4 | Little Atoms 5 | Le Show With Harry Shearer Some voices were just born for radio. 6 | The Pod Delusion