Occupations and strikes roundup. It's the systematic dismantlement of public edu that's destrying our campus... Academic ideals are being crushed to suit private-sector style management. 'British higher education sector is in crisis mode and those chosen to oversee this crisis are recruited from the private sector.' Photograph: Alice Bell As an early-career lecturer in a post-1992 university, I often feel like a rare bird in an ornate cage struggling to maintain its dignity in a discount superstore filled with pets. 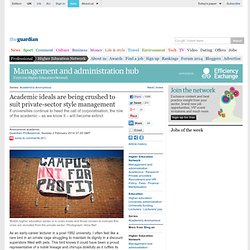 This bird knows it could have been a proud representative of a noble lineage and chirrups dolefully as it ruffles its plumes, but the song is drowned out by the bustling sale of cheap, plastic imitation bird-objects around it. The British higher education sector is in full-on crisis mode and those chosen or imposed to oversee this crisis are, in the main, non-academics and are recruited from the private sector. Academic ideals are being crushed by the visions of middle-management bureaucrats who view the progress and survival of higher education as requiring its surrender to private sector ideals. Along with this "progress" comes inevitable inequality.

Exeter College closes JCR kitchen "indefinitely" The single JCR kitchen has been closed due to 'mess', with students linking the move to the college's ongoing hall boycott Photograph: Ella Richards UPDATE: The kitchen was re-opened on Monday after members of the JCR, and the Cut The Catering Charge committee, made assurances to the Junior Dean that the kitchen would be adequately cleaned and drew up a rota. 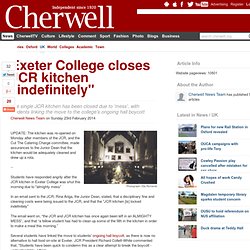 Students have responded angrily after the JCR kitchen in Exeter College was shut this morning due to "almighty mess" In an email sent to the JCR, Rina Ariga, the Junior Dean, stated, that a disciplinary fine and cleaning costs were being issued to the JCR, and that the "JCR kitchen [is] locked indefinitely" Exeter students go on indefinite hall strike. JCR launches hall strike to protest 'ludicrous' £840 food fee Photograph: Xani Hargreaves Exeter College students have begun a hall boycott after an emergency JCR meeting was held on Sunday to reaffirm the decision and discuss alternative eating options. 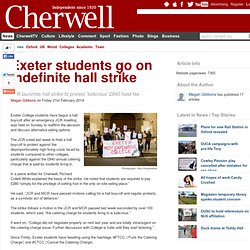 The JCR voted last week to hold a hall boycott to protest against the disproportionately high living costs faced by students compared to other colleges, particularly against the £840 annual catering charge that is paid by students living in. In a piece written for Cherwell, Richard Collett-White explained the basis of the strike. He noted that students are required to pay £280 “simply for the privilege of setting foot in the only on-site eating place.” He said, “JCR and MCR have passed motions calling for a hall boycott and regular protests, as a symbolic act of defiance.” Wave of repression against students. Our battle to democratise universities will go on. Since the beginning of the academic year, universities have witnessed the growth of a broad movement against the privatisation of higher education, focused around a series of strikes by education workers and demands for the democratisation of universities. 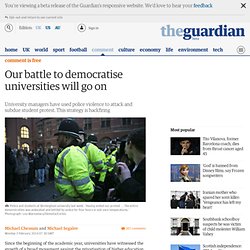 The police and management response to this emerging movement constitutes the most violent and draconian clampdown on the right to organise on campuses in decades, and is providing a clear example of what austerity and political policing will mean for civil liberties. Last week, students from around the country gathered in Birmingham to plan the next phase of a reinvigorated student movement, and demonstrate at the university under a banner that included a living wage for all staff and an end to the marketisation of universities. Russell Brand Calling for Revolution at the Oxford Union. Russell Brand Calling for Revolution at the Oxford Union. 3Cosas Campaign -Univ-of-London- affiliates.

Liverpool. Burlington College Student Union. Bradford Student Solidarity (BSS) We, the undersigned, are students and staff at the University of Bradford. 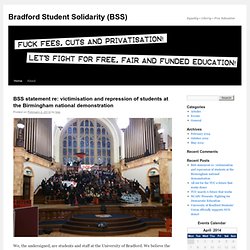 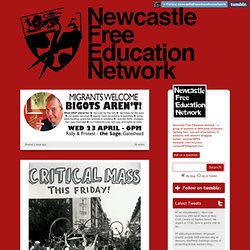 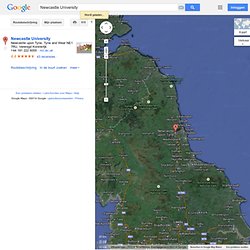