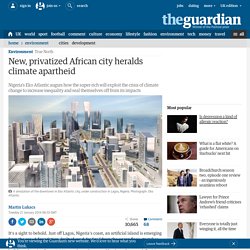 Just off Lagos, Nigeria's coast, an artificial island is emerging from the sea. A foundation, built of sand dredged from the ocean floor, stretches over ten kilometres. Promotional videos depict what is to come: a city of soaring buildings, housing for 250,000 people, and a central boulevard to match Paris' Champs-Élysées and New York's Fifth Avenue. Privately constructed, it will also be privately administered and supplied with electricity, water, mass transit, sewage and security. It is the "future Hong Kong of Africa," anticipates Nigeria's World Bank director. Welcome to Eko Atlantic, a city whose "whole purpose", its developers say, is to "arrest the ocean's encroachment. " Daniel Brook author of A History of Future Cities. Future mobility: what will be the world in 2030? 4 Smart Designs For New Cities That Can Withstand Any Storm.

Since most cities are built next to water, the risk of floods threatens more people than any other natural disaster. 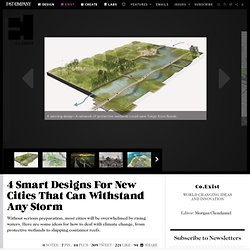 That risk is increasing as climate change pushes sea levels higher, and though cities are starting to design solutions--witness the flurry of new plans for resilient buildings in New York City after Hurricane Sandy--there’s a need for many more ideas. A recent competition asked architects and other designers to “stormproof” cities for the future. Img - New Meadowlands project NY. New Meadowlands. Rebuild by Design. New Cities Summit 2014: Opening Panel: Re-Imagining Cities. Dubai ruins by jonasdero-d1x0g24. Hong Kong Ruins by JonasDeR. Five Architecture And Urban Planning Trends We Hope To See More Of In 2014. As 2013 comes to a close, we are taking the opportunity to look back on the memorable trends that have influenced the larger dialogue of architecture and urban design.

From the beach-side city of Miami slowly transforming into the USA's next design center, to a mushrooming of super-tall skyscrapers competing for the distinction of "world's tallest building," to proposals for entire cities that function on renewable energy and sustainable building practices, 2013 may be remembered best for the proposals by big-named architects seeking to claim attention-grabbing titles over the next couple of years. The upcoming year presents numerous challenges to architects, especially in solving issues of sustainability and climate change, an ever increasing income gap in our largest cities, and planning for the smart growth of cities, especially as the world's population becomes increasingly urbanized. 1. 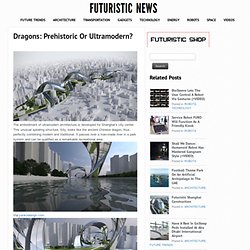 This unusual spiraling structure, Sity, looks like the ancient Chinese dragon, thus perfectly combining modern and traditional. Will Domes Cover Our Future CIties? Best #Cityreads of the Week. A round-up of the best stories on cities and urbanism we've come across in the last seven days. 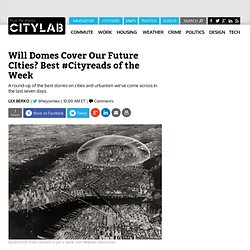 Tweet us your favorites with #CityReads. "The Giant Chinese Odor Dome, and Other Sad Ideas for Surviving Our Future Cities," Alex Pasternack, Motherboard Nothing's wrong with a giant dome, in theory. Does a dome contain a problem or keep a problem outside? When does a temporary solution create a much bigger problem? "Should Tourism Ask More Questions Than It Answers? " The Lost Colony, as the settlement on Roanoke Island came to be known, is just that: all was lost; nothing remains. 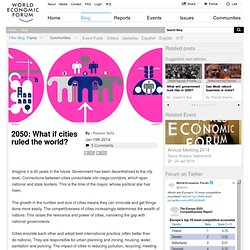 Government has been decentralized to the city level. Connections between cities consolidate into mega-corridors, which span national and state borders. The Emerging Future of Cities. I travel a lot, and just in the last year I've spent time in some of the worlds wealthiest cities, its poorest, and its most rapidly changing. 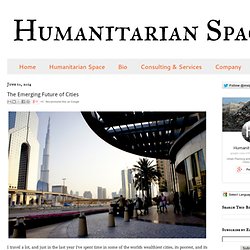 As master plans go, it’s one of the more outlandish in recent years: a pair of shimmering, stalagmite-shaped towers reaching nearly a mile into the air, orbited by planetary hotels and surrounded by the vast domes of biomass boilers, all emitting a faintly supernatural glow in the twilight sky. 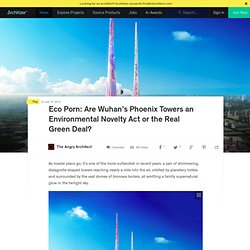 Add To Collection Save this image to a collection Phoenix Towers CGI via Inhabitat Phoenix Towers CGI. Image via 1kam1. Will New York’s billion dollar design contest prevent future flooding? A series of landmark infrastructure projects to protect New York City and New Jersey from flooding have been given the go-ahead after the conclusion of a record-breaking design competition. 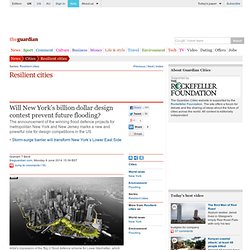 The innovative schemes – with a total budget of almost $1bn – will protect the vital urban areas from rising sea levels and storm surges, such as was caused by hurricane Sandy in 2012. Smart or stupid: will our cities of the future be easier to hack? News update: cyber terrorists have hacked into the electricity company supplying a residential area of the city and caused a blackout. 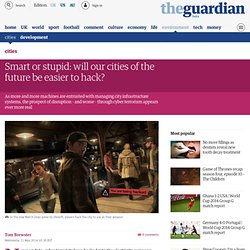 They’ve sent an email with their demands to restore power - it’s a significant amount of money. The city’s cyber defenders have been tasked with retaking control of the compromised machines and restoring power to citizens. Don’t panic. Not yet, anyway. This isn’t a real city. Instead, the scenario comes from CyberCity, a virtual urban environment set up by US government contractor Counter Hack to train officials in the threats facing our ever more computer-controlled cities. How Cities Can Prepare for Rising Sea Levels. You’ve heard the latest on climate change, and as is sadly so often the case, it’s even worse than we thought before. 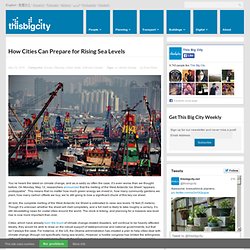 On Monday, May 12, researchers announced that the melting of the West Antarctic Ice Sheet “appears unstoppable”. This means that no matter how much green energy we invest in, how many community gardens we plant, how many carbon offsets we buy, we’re still going to lose a significant chunk of this key ice sheet. All told, the complete melting of the West Antarctic Ice Sheet is estimated to raise sea levels 16 feet (5 meters). Envision 2050: The Future of Cities.