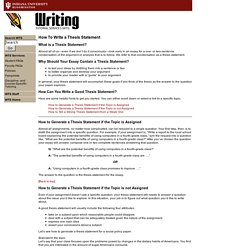 Almost all of us—even if we don’t do it consciously—look early in an essay for a one- or two-sentence condensation of the argument or analysis that is to follow. We refer to that condensation as a thesis statement. Why Should Your Essay Contain a Thesis Statement? To test your ideas by distilling them into a sentence or two to better organize and develop your argument to provide your reader with a “guide” to your argument. Essay Writing Skills. How to Write a Topic Sentence: 5 steps. English Help Sheets. Purdue OWL. Teen Ink. Iconic Images. Famous, Infamous and Iconic Photos. Warsaw Ghetto Uprising. Its title was mirthless: “Es gibt keinen jüdischen Wohnbezirk in Warschau mehr!”

(The Jewish Quarter of Warsaw is no more!) ; while it was an official dossier laden with bureaucratese that numbed and insulated the Nazis for the enormity of their actions, it also was a souvenir album for Himmler. Only three copies were made, all recovered after the war, and photographs they held within them were used at Nuremberg Trials. The Fall of the Berlin Wall. Anthony Suau is a longtime Time magazine contract photographer.

Winston Churchill by Yousef Karsh. It was one of the most famous portraits ever made. 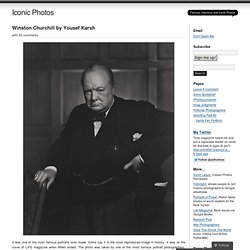 Some say it is the most reproduced image in history. It was on the cover of LIFE magazine when WWII ended. The photo was taken by one of the most famous portrait photographers, Yousef Karsh–known as Karsh of Ottawa–on 30 December, 1941, after Churchill gave a speech to Canadian House of Commons in Ottawa. Lee Harvey Oswald shot. On November 24, 1963, two days after Lee Harvey Oswald was arrested for the assassination of President John F.

Kennedy, he was about to be transfered police headquarters to the nearby county jail. Oswald was handcuffed to Dallas detective Jim Leavelle. At 11:21 am, stepping out from a crowd of reporters and photographers, a nightclub owner Jack Ruby fired a Colt Cobra .38 into Oswald’s abdomen on a nationally televised live broadcast. His motives for killing Oswald were not clear. Ali vs. Liston. The first Sonny Liston-Cassius Clay fight in 1964 when Liston was the world heavyweight champion ended in controversy: during the fourth round, Clay started complaining that there was something burning in his eyes and that he could not see.

It has been theorized that a substance used to stop Liston’s cuts from bleeding caused the irritation. Clay won the match on a TKO. A rematch was set in May 25th 1965, this time with Liston as challenger; Clay was now Muhammad Ali after joining the Nation of Islam the previous year. Due to the fightt being staged in a small auditorium in remote Lewiston, Maine, only 2,500 fans were present, setting the all-time record for the lowest attendance for a heavyweight championship fight. (It remains the only heavyweight title fight held in the state of Maine.) Midway through the first round, Liston fell to the canvas; Ali refused to retreat to a neutral corner, standing over his fallen opponent, gesturing and yelling at him, “Get up and fight, sucker!”

Woodstock Couple. Vulture Stalking a Child. In March 1993, photographer Kevin Carter made a trip to southern Sudan, where he took now iconic photo of a vulture preying upon an emaciated Sudanese toddler near the village of Ayod.

Carter said he waited about 20 minutes, hoping that the vulture would spread its wings. It didn’t. A Soldier’s Despair. During the 1991 Gulf war, media access was limited by Pentagon restrictions.

President Bush was merely continuing the practice used by Reagan when he invaded Grenada in 1983: the military left reporters and photographers behind. Burst of Joy. The Falling Man. “The Falling Man” is a photograph taken by Richard Drew at 9:41:15 a.m., on September 11, 2001 of a man falling from the World Trade Center during the September 11 attacks in New York City.

The man in the photohraph remains unknown. The picture is deceptive, however, as it suggest that man was falling straight down, however, this is just one of many photographs of his fall. It is evident from these other pictures that he tumbling out of control. Flower Child, Pentagon. The March on the Pentagon on October 21st 1967 was not the first, the last or the largest of anti-Vietnam war protests by activists, hippies, students and draft resisters.

However, the rally was envisioned with one adamant purpose: to shut down the war effort, if only for a day — and on that October morning the crowd of some 100,000 confronted 2,500 rifle-wielding soldiers for just that. The organizerorganizer Abbie Hoffman held a mass exorcism, hoping to levitate the Pentagon 300 feet off the ground, turn it orange and vibrate out any evil spirits. French photojournalist Marc Riboud noticed a lone girl posturing inches from the soldiers’ sheathed bayonets. She was trying to start a dialogue with them. Riboud crept close, snapping away in the soft, dying light of the late afternoon with the last of his film.

The photo–perhaps as as proxy for the girl–talked to the soldiers; it convinced them to throw down their guns and join the anti-war movement soothingly and softly. Like this: Migrant Mother. Dorothea Lange was one of the photographers hired by the Farm Security Administration (FSA) to document the social condition as a result of the Depression. Exhausted from photographing farms in Nipomo, California, Lange turned down a dirt road to investigate a migrant camp of pea pickers. In less than fifteen minutes, Lange was back on the road after making five exposures of a woman (Florence Thompson) and her children in the camp. Lange thought Thompson’s nervous gesture of placing her hand on her mouth as dignified and framed one of the photos to echo Madonna and child, and American values of endurance in the face of adversity, and submitted it (titled Migrant Mother) to her agency. The Tank Man. This is a picture that needs no caption. Five-Paragraph Expository Essay Model. 10 tips for writing an essay.

Rather than worrying about an essay for weeks, suggest to your child to read through these 10 points, get in some early preparation and have the self-belief that they can do it. Read the essay question carefully Highlight key words. Use the dictionary to check the meaning of any unfamiliar words. Identify the task words that indicate what needs to be done, eg ‘discuss', ‘explain', ‘compare'. ProCon.org - Pros and Cons of Controversial Issues.