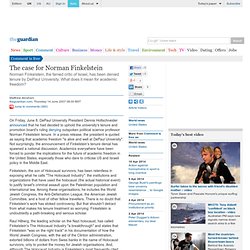 In a press release, the president is quoted as saying that academic freedom "is alive and well at DePaul University". Not surprisingly, the announcement of Finkelstein's tenure denial has spawned a national discussion. Appearance by B.D.S. at Brooklyn College Spurs Protest. Up with Chris Hayes 01:37. Now playing Dissecting the notion of ‘Deporter-in-Chief’up next Can damage with Latino community be repaired? 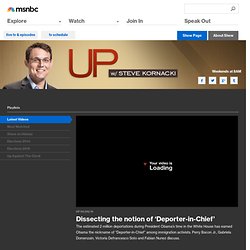 Will GOPers pivot away from anti-ACA message? Can ACA change voters’ minds in red states? Headlines making the news ‘This was torture by anybody’s definition’ Can public opinion on torture change? Relationship between late night and politics The politics of late night television The future of late night Another signal detected in MH370 search A benchmark week in health care reform Is 2016 the next battleground in ACA fight? Brooklyn College's academic freedom increasingly threatened over Israel event.

(updated below) On Tuesday, I wrote about a brewing controversy that was threatening the academic freedom of Brooklyn College (see Item 7). 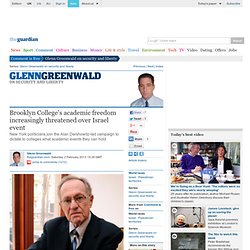 The controversy was triggered by the sponsorship of the school's Political Science department of an event, scheduled for 7 February, featuring two advocates of the Boycott, Divestment and Sanctions movement (BDS) aimed at stopping Israeli oppression of the Palestinians [one speaker is a Palestinian (Omar Barghouti) and the other a Jewish American (philosopher Judith Butler)]. The event is being co-sponsored by numerous student and community groups, including Students for Justice in Palestine, the college's LGBT group, pro-Palestinian Jewish organizations, and an Occupy Wall Street group. NYC officials threaten funding of Brooklyn College over Israel event. (updated below) On Saturday, I wrote about the numerous New York City officials (including multiple members of the US House of Representatives) who have predictably signed onto the Alan-Derwshowitz-led attack on academic freedom at Brooklyn College. 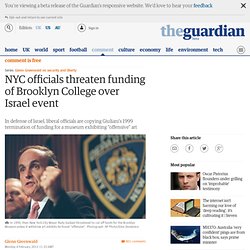 This group of Israel advocates and elected officials is demanding that the college's Political Science department rescind its sponsorship of an event featuring two advocates of the BDS movement aimed at stopping Israeli occupation and settlements. Brooklyn College’s anti-Israel hatefest  Egan-Chin,Debbie/Egan-Chin,Debbie The campus of Brooklyn College, where a forum highly critical of Israel is to be held on Feb. 7. 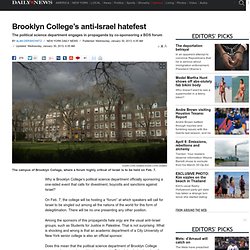 Why is Brooklyn College’s political science department officially sponsoring a one-sided event that calls for divestment, boycotts and sanctions against Israel? On Feb. 7, the college will be hosting a “forum” at which speakers will call for Israel to be singled out among all the nations of the world for this form of delegitimation. Obama's non-closing of GITMO, kind NYT headlines, and US government irony.

A few (relatively) brief items worthy of note today: (1) The New York Times' Charlie Savage reported yesterday that the State Department "reassigned Daniel Fried, the special envoy for closing the prison at Guantánamo Bay, Cuba, and will not replace him". 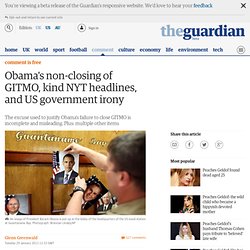 That move obviously confirms what has long been assumed: that the camp will remain open indefinitely and Obama's flamboyant first-day-in-office vow will go unfulfilled. Dozens of the current camp detainees have long been cleared by Pentagon reviews for release - including Adnan Farhan Abdul Latif, a 36-year-old Yemeni who died at the camp in September after almost 11 years in a cage despite never having been charged with a crime. Like so many of his fellow detainees, his efforts to secure his release were vigorously (and successfully) thwarted by the Obama administration. BREAKING: WikiLeaks Takes On Oxford Union. UPDATE: Oxford Union Respond To Assange. Oxford Union respond to Assange and boost The Tab’s ego by calling us ‘cute’. 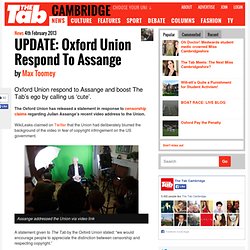 The Oxford Union has released a statement in response to censorship claims regarding Julian Assange’s recent video address to the Union. WikiLeaks claimed on Twitter that the Union had deliberately blurred the background of the video in fear of copyright infringement on the US government. Assange addressed the Union via video link A statement given to The Tab by the Oxford Union stated: “we would encourage people to appreciate the distinction between censorship and respecting copyright.” The footage, said to have been personally selected by Assange himself, came from a controversial video released by WikiLeaks in 2010. Julian Assange speech that was censored by the Oxford Union. Sam Adams Awards. NotPICNIC : 'the last bastion of free speech'... 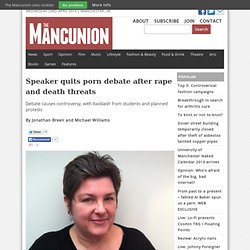 Writer Julie Bindel, co-founder of feminist campaigning organisation Justice For Women, dropped out from the Manchester Debating Union (MDU) event after being sent 30 hate-mail messages. Three of the messages, Ms. Bindel told The Mancunion, were so severe that she reported them to the police. Fierce opposition arose from students and trans-activists soon after MDU announced the lineup for their debate – titled “This house believes that porn empowers women” – on July 29. The backlash stems from an article Ms. “I apologised for the tone in that article because I made really inappropriate jokes and it was just wholly inappropriate the way I dealt with it,” she said. Ms. Death-threats-force-feminist-campaigner-out-of-university-debate-8821362. The lesbian writer and co-founder of the Justice For Women campaign says she has been sent 30 unsavoury messages, some including death and rape threats, with three so severe that she reported them to the police. 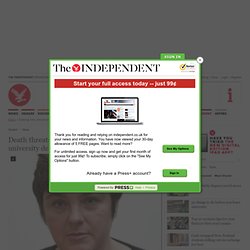 Following the announcement of the speakers, a demonstration was organised by Loz Webb, trans representative for the university’s LGBTQ Society. “I would love to come back and do something again,” Bindel confirmed. Brief%20an%20Bundesrat_Horizon%202020%20%20Erasmus+ ScienceGuide: EU straft Zwitsers. ScienceGuide: Referendum hits Swiss Academia. 19 februari 2014 - “Swiss education, research and innovation will become completely isolated.” 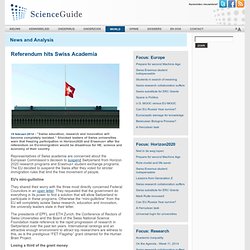 Shocked leaders of Swiss universities warn that freezing participation in Horizon2020 and Erasmus+ after the referendum on EU-immigration would be disastrous for HE, science and economy of their country. Representatives of Swiss academia are concerned about the European Commission’s decision to suspend Switzerland from Horizon 2020 research programs and Erasmus+ student exchange programs. The EU decided to suspend the Swiss after they voted for stricter immigration rules that limit the free movement of people. EU’s mini-guillotine They shared their worry with the three most directly concerned Federal Councilors in an open letter. BREAKING: WikiLeaks Takes On Oxford Union. CvB verbiedt bijeenkomst over oorlog in Gaza. Anja_Vink : Een filmpje van Haagse (?) ...