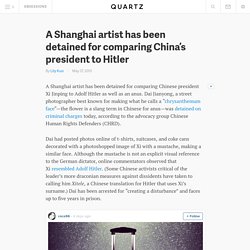 Dai Jianyong, a street photographer best known for making what he calls a “chrysanthemum face“—the flower is a slang term in Chinese for anus—was detained on criminal charges today, according to the advocacy group Chinese Human Rights Defenders (CHRD). Dai had posted photos online of t-shirts, suitcases, and coke cans decorated with a photoshopped image of Xi with a mustache, making a similar face. Although the mustache is not an explicit visual reference to the German dictator, online commentators observed that Xi resembled Adolf Hitler. (Some Chinese activists critical of the leader’s more draconian measures against dissidents have taken to calling him Xitele, a Chinese translation for Hitler that uses Xi’s surname.) GreatFire.org sur Twitter : ""2 main criteria for banning books: one black, one yellow: black = political issues, yellow = sex.” via @ael_o" Release five women protesters in China. Five women ­­­­have been criminally detained in China for "picking quarrels and provoking troubles. 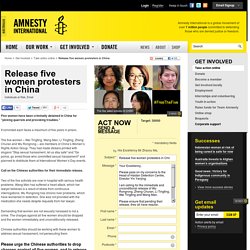 " If convicted each faces a maximum of five years in prison. The five women ­­– Wei Tingting, Wang Man, Li Tingting, Zheng Churan and Wu Rongrong – ­­are members of China’s Women’s Rights Action Group. They had made stickers printed with slogans "Stop sexual harassment, let us stay safe" and "Go police, go arrest those who committed sexual harassment! " and planned to distribute them at International Women’s Day events. Two million 'internet opinion analysts' employed to monitor China's vast online population. Some two million people are employed by the Chinese government at all levels, as well as businesses, to monitor public opinion on Chinese social media, according to a report in Thursday’s Beijing News. 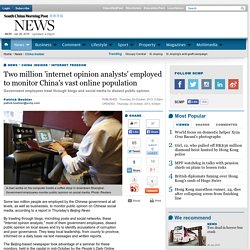 By trawling through blogs, microblog posts and social networks, these "Internet opinion analysts," most of them government employees, dissect public opinion on local issues and try to identify accusations of corruption and poor governance. They keep local leadership, from county to province, informed on a daily basis via text messages and written reports. The Beijing-based newspaper took advantage of a seminar for these monitors, held in the capital in mid-October by the People’s Daily Online Public Opinion Monitoring Centre, a think tank-like unit of the Communist Party’s official mouthpiece, to meet these usually anonymous local government staffers known as “online public opinion analysts”. 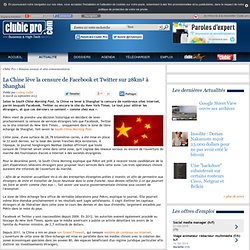 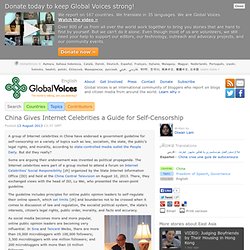 But did they really? Some are arguing their endorsement was invented as political propaganda. The Internet celebrities were part of a group invited to attend a forum on Internet Celebrities’ Social Responsibility [zh] organized by the State Internet Information Office (IIO) and held at the China Central Television on August 10, 2013. There, they exchanged views with the head of IIO, Lu Wei, who presented the seven-point guideline. Pan Shiyi said in the forum that all netizens are and should be treated as active individuals. As social media becomes more and more popular, online public opinion leaders are becoming very influential. The set of principles has received quite some welcome in the past two days, yet others questioned it. 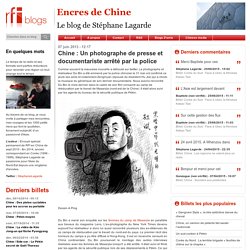 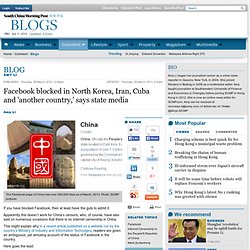 Apparently this doesn’t work for China’s censors, who, of course, have also said on numerous occasions that there is no internet censorship in China. This might explain why in a recent article published on a website run by the country’s Ministry of Industry and Information Technolgoy, readers are given an ambiguous, yet amusing account of the status of Facebook in the country. Here goes the lead: Kaifu Lee: Check Out My Chart of How Often I Get Censored by Sina Weibo. Despite insisting that he’s no activist and is just keen on debating with his 33.4 million followers on Sina Weibo, entrepreneur and former Google China country manager, Kaifu Lee, finds his Weibo posts get censored and deleted quite a lot. 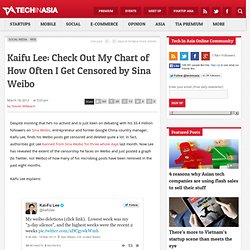 In fact, authorities got Lee banned from Sina Weibo for three whole days last month. Now Lee has revealed the extent of the censorship he faces on Weibo and just posted a graph (to Twitter, not Weibo) of how many of his microblog posts have been removed in the past eight months. Kaifu Lee explains: Here’s the graph he made: Sky News reporter detained on live TV by Chinese police - Video Dailymotion - Pale Moon.

I have not spoken with anyone from Xinhua for exactly one year.

Chinese lexicon for you know what. Ai Weiwei. The “Occupy” Series: Sina Weibo’s New List of Banned Search Terms. As the Occupy Wall Street movement goes global, China’s call for calm observation and reflection may have been followed by another round of censorship in cyberspace. 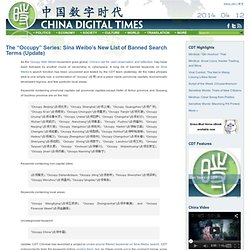 A long list of banned keywords on Sina Weibo’s search function has been uncovered and tested by the CDT team yesterday. All the listed phrases stick to one simple rule: a combination of “occupy” (占领) and a place name–provincial capitals, economically developed regions, and few symbolic local areas. David Cameron’s net-censorship proposal earns kudos from Chinese state media. UK prime minister David Cameron (who is reported to have rioted himself and then fled police while at university) has proposed a regime of state censorship for social media to prevent people from passing on messages that incite violence. 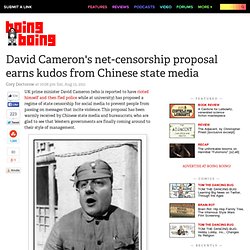 This proposal has been warmly received by Chinese state media and bureaucrats, who are glad to see that Western governments are finally coming around to their style of management. The British Government’s wariness of the Internet and Blackberry Messenger – symbols of freedom of speech – is a forced reaction, which might upset the Western world. Meanwhile, the open discussion of containment of the Internet in Britain has given rise to a new opportunity for the whole world. 'Illegal' Internet Cafes Closed. The closure is part of Beijing's long-term strategy to regulate cybercafes. China said it has shut down more than 130,000 "illegal" Internet cafes, according to a new government report issued this week, and vows to extend the crackdown from urban to rural areas.

Nearly 7,000 of the closures took place in 2010. The closures took place over the past six years as part of Beijing's long-term strategy to regulate cybercafes, official media reported on Friday. China has rolled out tough new regulations aimed at monitoring Internet usage across the country in the past year, with many Internet cafes now requiring a swipe of smart ID cards before allowing people online. 60 000 sites pornographiques fermés en Chine. Kang Sheng. Kang Sheng (Chinese: 康生; pinyin: Kāng Shēng; c. 1898–December 16, 1975) was a Communist Party of China ("CPC") official best known for having overseen the work of the CPC's internal security and intelligence apparatus during the early 1940s and again at the height of the Cultural Revolution in the late 1960s and early 1970s.

A member of the CPC from the early 1920s, he spent time in Moscow during the early 1930s, where he learned the methods of the NKVD and became a supporter of Wang Ming for leadership of the CPC. After returning to China in the late 1930s, Kang Sheng switched his allegiance to Mao Zedong and became a close associate of Mao during the Anti-Japanese War, the Chinese Civil War and after. He remained at or near the pinnacle of power in the People's Republic of China from its establishment in 1949 until his death in 1975. Global Voices en Français » Chine : Publication d’une liste noire d’internautes. Un an de camp de rééducation pour un tweet ironique. La révolte des Twitter en Chine. Viewcontent.cgi (Objet application/pdf) Chine : bientôt un logiciel de censure ? Le lama andin se déchaîne contre la censure chinoise sur Interne.

Jason Ng from Kenengba tries to enrich the discussion by outlining various aspects of Chinese Internet censorship. 1. Non-transparent censorship A. Internet en Chine : Pékin peut faire encore pire. Waiting for Wikileaks: Beijing’s Seven Secrets. While people in the US and elsewhere have been reacting to the release by WikiLeaks of classified US documents on the Afghan War, Chinese bloggers have been discussing the event in parallel with another in their own country.

On July 21 in Beijing, four days before WikiLeaks published its documents, Chinese President Hu Jintao convened a high-level meeting to discuss ways to prevent leaks from the archives of the Communist Party of China. Party archives in China exist at local, provincial, and central levels and have always been secret and extremely closely guarded.