Charging Journalists via The Computer Fraud and Abuse Act. Media Critiques by Abby Martin. Going After Jounalists Sources. Journalist Lacking Power. Press Censorship. Under Reported. Fox News host begs GOP candidates to stop answering questions the American public doesn’t like their answers to. On Thursday night’s episode of The Five, co-host Eric Bolling — fresh off his guest-hosting duties on The O’Reilly Factor — proposed that the best way for GOP candidates to avoid being tricked into saying terrible things about social issues would be to simply refuse to answer questions about them. 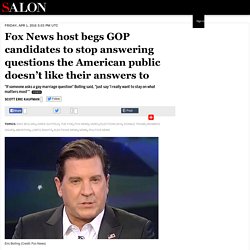 Co-host Greg Gutfeld noted that when Trump claimed that there conservatives who believe that women who receive illegal abortions should be prosecuted, he was flabbergasted, as “I don’t know a single one.” Melissa Francis, another panelist, agreed — and echoing Marc Thiessen’s complaints to Megyn Kelly earlier that evening, added that “he managed to offend everyone with one single answer. I felt like he was playing Jeopardy, he kept saying ‘The answer is, the answer is.'” Bolling suggested that the ideal “answer” would be a bitten tongue, but Gutfeld wasn’t satisfied by that.

“You don’t want a president who’s prepared?” Watch the entire exchange below via Media Matters. Chelsea-manning-the-us-militarys-campaign-against-media-freedom. Photo FORT LEAVENWORTH, Kan. — WHEN I chose to disclose classified information in 2010, I did so out of a love for my country and a sense of duty to others. 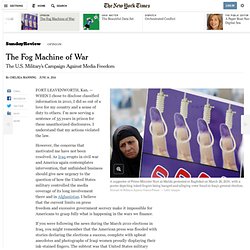 I’m now serving a sentence of 35 years in prison for these unauthorized disclosures. I understand that my actions violated the law. However, the concerns that motivated me have not been resolved. As erupts in civil war and America again contemplates intervention, that unfinished business should give new urgency to the question of how the United States military controlled the media coverage of its long involvement there and in . If you were following the news during the March 2010 elections in Iraq, you might remember that the American press was flooded with stories declaring the elections a success, complete with upbeat anecdotes and photographs of Iraqi women proudly displaying their ink-stained fingers. Those of us stationed there were acutely aware of a more complicated reality. Reporters should have timely access to information. Criminalization of Journalism: Birgitta Jonsdottir on Barrett Brown. [DALLAS, TX] The curious case of Barrett Brown —a freelance journalist and satirist, turned political prisoner— has captivated thousands in the lead-up to what many are calling a “show trial” slated to take place in Dallas, TX, later this year. 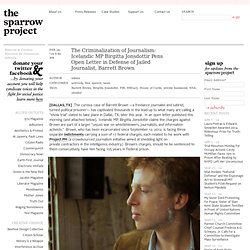 In an open letter published this morning (and attached below), Icelandic MP, Birgitta Jonsdottir claims the charges against Brown are part of a larger ”unjust war on whistleblowers, journalists, and information activists.” Brown, who has been incarcerated since September 12, 2012, is facing three separate indictments carrying a sum of 17 federal charges, each related to his work with Project PM (a crowdsourced journalism initiative aimed at shedding light on private contractors in the intelligence industry.)

Brown’s charges, should he be sentenced to them consecutively, have him facing 105 years in Federal prison. Birgitta Jonsdottir is a member of the Icelandic Parliament and an outspoken advocate for at-risk whistleblowers and journalists. Is Major Censorship Happening on Reddit? How Glenn Greenwald’s Blockbuster Article Was Banned Over and Over. I’m not a regular Reddit user. 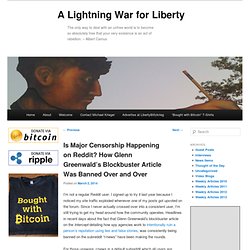 I signed up to try it last year because I noticed my site traffic exploded whenever one of my posts got upvoted on the forum. Since I never actually crossed over into a consistent user, I’m still trying to get my head around how the community operates. Headlines in recent days about the fact that Glenn Greenwald’s blockbuster article on the Intercept detailing how spy agencies work to intentionally ruin a person’s reputation using lies and false stories, was consistently being banned on the subreddit “r/news” have been making the rounds.

For those unaware, r/news is a default subreddit which all users are automatically subscribed to, thus it generates a huge amount of traffic. It’s basically the front page news section of the 64th most popular website in the world (according to Alexa data). Like other subreddits, r/news has rules and those rules are enforced by a group of people known as moderators. Opinion/Analysis. Not news. Satire. Unreliable source. c4r3ym4 added: Sensors and Journalism. Acknowledgements The hardworking journalists, scientists, activists, and researchers featured in the case studies gave a lot of their time to talk with the Tow Center, review drafts, and clarify fine points. 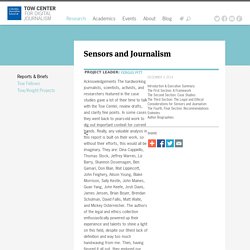 In some cases they went back to years-old work to dig out important context for current trends. Really, any valuable analysis in this report is built on their work, so without their efforts, this would all be imaginary. Blocking of Social Media. Facebook Censorship. Media Blind Spots. Media: bias, literacy & propaganda. Threats to Journalism.