Tianjin blasts: 'It was like the end of the world' Residents of the Chinese port city of Tianjin have described in detail the shocking blasts of Wednesday night and the devastation across their city on microblogging network Weibo and other forums. 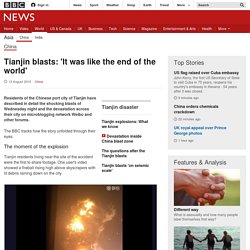 The BBC tracks how the story unfolded through their eyes. The moment of the explosion Tianjin residents living near the site of the accident were the first to share footage. One user's video showed a fireball rising high above skyscrapers with lit debris raining down on the city. Many described it as an apocalyptic scene, with user Upright Teenager, saying: "There were three explosions, it was like the end of the world. " Tianjin student I'm A Flying Superhero shared these photos of the blast near her home. Residents fled to the streets in shock and many uploaded images of people wandering about in a daze with a hazy, fluorescent sky lit up by the explosions. "I'm still alive," were the simple words of Little Five Crazy. It was felt far and wide through the city Residents started offering help. American writers are self-censoring, PEN survey finds.

PEN America, a nonprofit that works to advance freedom of expression and speech in literature, has released a disturbing survey that finds American writers are not just increasingly worried about government surveillance as a result of the NSA — but also engaging in self-censorship. Out of the 528 PEN members who responded to the survey, “Fully 85% are worried about government surveillance of Americans, and 73% of writers have never been as worried about privacy rights and freedom of the press as they are today.” Writers are also “”self-censoring their work and their online activity due to their fears that commenting on, researching, or writing about certain issues will cause them harm,” the survey finds, on topics such as “military affairs, the Middle East North Africa region, mass incarceration, drug policies, pornography, the Occupy movement, the study of certain languages, and criticism of the U.S. government”:

How to Get Censored on China’s Twitter. For five months, we’ve been observing 100 accounts on Sina Weibo, “China’s Twitter,” keeping track of images that are deleted by censors. 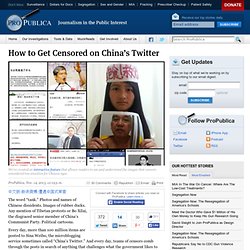 Those deleted images provide a window onto China’s vast system of censorship. We’ve created an interactive feature that allows readers to see and understand the images that censors considered too sensitive for Chinese eyes. 中文版:新浪微博:遭遇中国式审查 [1] The word “tank.” Photos and names of Chinese dissidents. Every day, more than 100 million items are posted to Sina Weibo, the microblogging service sometimes called “China’s Twitter.” How Sina Weibo censors its users is as revealing as the content that appears on the site, and for the past five months, we’ve been watching the watchers.

They were a few short sentences, typed by a young girl with the online handle Smm Miao. 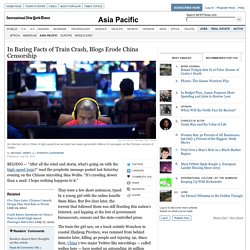 But five days later, the torrent that followed them was still flooding this nation’s Internet, and lapping at the feet of government bureaucrats, censors and the state-controlled press. The train the girl saw, on a track outside Wenzhou in coastal Zhejiang Province, was rammed from behind minutes later, killing 40 people and injuring 191.

Since then, ’s two major Twitter-like microblogs — called weibos here — have posted an astounding 26 million messages on the tragedy, including some that have forced embarrassed officials to reverse themselves. The messages are a potent amalgam of contempt for railway authorities, suspicion of government explanations and shoe-leather journalism by citizens and professionals alike. Beijing Renews Google’s License in China. Chinese veteran politicians call for reform. 13 October 2010Last updated at 16:04 Liu Xiaobo was jailed for 11 years in December 2009 A group of 23 Communist Party elders in China has written a letter calling for an end to the country's restrictions on freedom of speech. 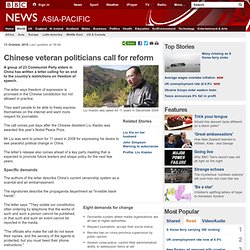 The letter says freedom of expression is promised in the Chinese constitution but not allowed in practice. They want people to be able to freely express themselves on the internet and want more respect for journalists. The call comes just days after the Chinese dissident Liu Xiaobo was awarded this year's Nobel Peace Prize. Mr Liu was sent to prison for 11 years in 2009 for expressing his desire to see peaceful political change in China. The letter's release also comes ahead of a key party meeting that is expected to promote future leaders and shape policy for the next few years. Specific demands.