St Judes Storm of 2013. Tornado-like clouds brew over Britain as severe storms set to hit this weekend. Swirling wind formations were seen over Lincolnshire this afternoonOne long twister was seen over Market Rasen, another near ScunthorpeDramatic images emerged as Met Office issued severe weather warningOn Saturday whole of England, Wales and southern Scotland are at riskForecasters predicted thundery rainstorms as well as 'intense' hail By Kieran Corcoran Published: 20:38 GMT, 4 June 2014 | Updated: 22:31 GMT, 4 June 2014 Tornadoes were spotted in the skies above Britain today as clouds darkened ahead of a bout of bad weather. 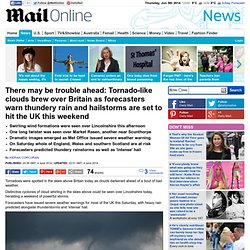 Distinctive cyclones of cloud whirling in the skies above could be seen over Lincolnshire today, heralding a weekend of powerful storms. UK weather: 50ft waves hit coast and 1.6inches of rain will fall on already sodden ground today. Huge ancient formation known as Pom Pom Rock off Portland, Dorset, destroyed by ferocious wavesIconic natural formation in Porthcothan Bay, Cornwall, shaped like giant doughnut also knocked downSomerset village of Muchelney cut off for four days after access roads were left under 3ft of waterEnvironment Agency issues 320 flood warnings or alerts - including severe warnings in DorsetMet Office issues 'be aware' yellow warning for wind as gusts of 70mph are expected in South-WestHeavy rain falls across much of Britain last night, with up to 1.6in expected on higher ground todayForecasters warn of 'exceptionally high waves' and say 0.4in of rain could fall in less than an hourSurfers fly in from US to follow deep depression across the Atlantic dubbed Winter Storm HerculesThree deaths: Man falls into Oxford river, man swept out to sea in Cornwall, woman killed in DevonWave-watchers still risking their lives to stand in dangerous locations, defying guidance from police Scroll down for videos. 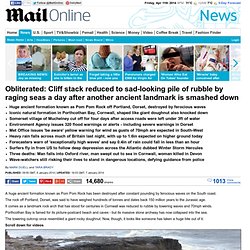 Astonishing photograph captures white horse jumping over Dorset wall. Uncanny shape of large white horse jumping over wall at Lyme Regis in Dorset captured by Richard Austin59-year-old photographer did not realise what he had taken until it was pointed out to him by other people By Mark Duell Published: 14:26 GMT, 5 January 2014 | Updated: 14:26 GMT, 5 January 2014 As Britain endures its worst series of winter storms in two decades, an astonishing photograph was captured on the South Coast. 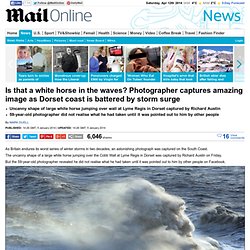 The uncanny shape of a large white horse jumping over the Cobb Wall at Lyme Regis in Dorset was captured by Richard Austin on Friday. But the 59-year-old photographer revealed he did not realise what he had taken until it was pointed out to him by other people on Facebook. UK weather: 50ft waves hit coast and 1.6inches of rain will fall on already sodden ground today. UK weather: Homes hit by flash flooding as huge thunderstorms sweep the country. Around 50 homes hit by flash flooding in Southwell, Nottinghamshire, following heavy downpoursEntire months rainfall hits Pershore, Worcestershire, in the space of three hours as the area is hit by 56mm of rainTwo flood warnings and 13 flood alerts put in place by the Environment AgencyMan, 27, drowns after going swimming in a reservoir in in Keswick, Cumbria. 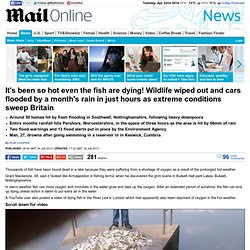 UK weather: Heatwave ends with a bang as thunder and lightning strike. Violent thunderstorms brought an abrupt end to UK's heatwave that saw temperatures hit 33.5C on MondayYesterday homes and properties across the country were badly damaged after they were hit by lightningThe country however was expected to experience 'tropical conditions' with high humidityParts of the UK were expected see 96 per cent humidity this week - muggier than Nigeria. 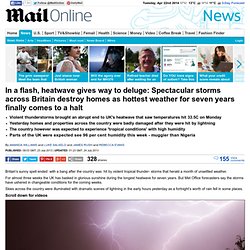 UK weather: Heatwave 'claims its third victim' as hunt for swimmer, 20, who went missing while in a river with friends enters its second day. The male swimmer disappeared in Malvern quarry lake yesterdayLast week, the body of Russell O’Neill, 17, was found at the same waterBody of Damian Southall, 20, recovered by divers this afternoonVanished in River Severn in Bridgnorth, Shropshire, yesterdaySouth of England expected to enjoy hottest temperatures tomorrowTemperature will reach 32C in London - beating 29.7C recorded on July 7Hottest July day on record was 36.5C in Wisley, Surrey, in 2006UK will be hotter than far-flung destinations like Rio de Janeiro at weekendMet Office issues heatwave warning amid health fears in high temperatures Published: 08:31 GMT, 12 July 2013 | Updated: 20:51 GMT, 12 July 2013 Rescue teams are searching a waters at a disused quarry for a missing man, less than a week after a teenager drowned in the same water. 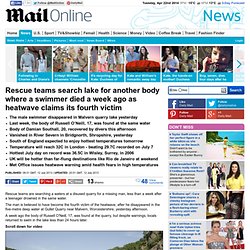 The man is believed to have become the fourth victim of the heatwave, after he disappeared in the five-metre deep water at Gullet Quarry near Malvern, Worcestershire, yesterday afternoon. UK weather: Snow falls amid 65mph winds while one town gets month of rain in just 24 hours. Up to 2in snow reported in Princetown, Devon, and Rhayader, PowysAnd 3in snow fell on high ground in Shropshire near Welsh borderMonth's rain in 24 hours to 7am today in Pembrey, CarmarthenshireSlates come off roofs and trees block roads in Devon and CornwallToday and tomorrow will see mixture of sunshine and showers in UKEngland and Wales will be mainly dry on Saturday but wet on Sunday By Andy Dolan for the Daily Mail Published: 10:23 GMT, 15 May 2013 | Updated: 00:55 GMT, 16 May 2013 When the country basked in temperatures warmer than the Mediterranean earlier this month, it seemed spring had finally sprung. 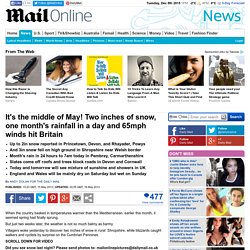 Millions expected to flee Britain this Easter as forecasters predict THREE MORE WEEKS of freezing weather, bringing chaos to the roads and even a triple-dip recession. Harsh weather will see holidaymakers ditch the UK for sunnier climes like Egypt, Turkey and Canary IslandsAA warns of 'winter warzone' as -10C temperatures bring ice on the roads and snow flurriesDrop in spending as people stay indoors could lead country into triple-dip recessionMet Office yellow weather warnings are in place for Wales, central and northern England and southern ScotlandCommuters will endure more misery with delays on morning commuteFarmers admit wave of Arctic weather has come at the worst possible time and they are having to work all hours By Mark Duell and Sam Webb Published: 10:40 GMT, 25 March 2013 | Updated: 05:31 GMT, 26 March 2013 Families sick of the cold weather are expected to leave Britain in their droves this weekend, after it emerged that Britain's freezing weather could continue until mid-April, with no sign of summer in sight and the temperatures set to dip to -3C over the coming days. 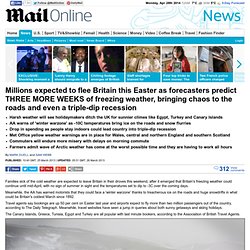 Is this the most mesmerising and beautiful picture of the winter? Weather forecasters predict flooding over the weekend as snow and ice thaws and band of rain sweeps the countryEnvironment Agency issues more than 40 flood alerts, most severe in Wales and South West of EnglandBritain will have to endure the big freeze, with heavy frosts across much of the country tomorrow morning A final heavy snowfall will hit Britain tomorrow, focusing on northern England and southern Scotland Today will see only light flurries of snow compared to recent days, felt along the eastern coast and in the MidlandsSoutheastern Trains has cancelled a number of trains this morning in order to use the carriages on other services By Larisa Brown Published: 09:26 GMT, 23 January 2013 | Updated: 14:39 GMT, 24 January 2013 This is the magical scene of a forest painted white with snow in Compton Down, Shaftesbury in Dorset yesterday. 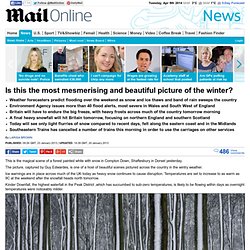 UK weather: Brollies up and batten down the hatches: Cold snap is over but winds and rain will batter Britain tomorrow. Gale force winds will reach speeds of up to 60mph at exposed southern coasts and high groundSunny spells and rain will reach the UK by the weekendTemperatures expected to reach up to 11C tomorrow in the southThermometer will hover around 2C and 4C today for large parts of the country By Anna Edwards Published: 11:38 GMT, 13 December 2012 | Updated: 16:30 GMT, 13 December 2012 A thick sparkling frost coated much of the UK today, leaving many places cold but with a winter wonderland look. 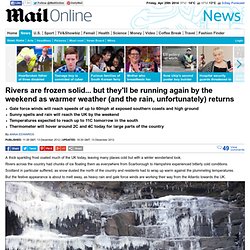 Rivers across the country had chunks of ice floating them as everywhere from Scarborough to Hampshire experienced bitterly cold conditions. Scotland in particular suffered, as snow dusted the north of the country and residents had to wrap up warm against the plummeting temperatures. But the festive appearance is about to melt away, as heavy rain and gale force winds are working their way from the Atlantic towards the UK. 'It'll be a wet day for the south west of England. Used to the cold! Hows the water? UK floods: Elderly woman dies in flooded home as deluge devastates houses and shops in North Wales city sparking huge evacuation. Neighbours fear woman found dead in her home had been trapped or was too fail to move as waters roseFamilies fled as swollen River Elwy burst its banks and surged through St Asaph in worst flood for 50 yearsBut hopes rise for clear-up as torrential rain which has deluged the country is expected to ease By David Wilkes Published: 23:11 GMT, 26 November 2012 | Updated: 08:18 GMT, 28 November 2012.

Woman, 21, killed and 2 injured by falling tree as hurricane-force winds batter Britain. By Richard Hartley-parkinson Published: 08:44 GMT, 25 November 2012 | Updated: 00:50 GMT, 27 November 2012 Map of the UK showing rainfall in the last seven days, white indicates the most rainfall with large areas of Devon and Somerset recieving over 15 cm This map shows the amount of rain that has fallen across the UK and the Republic of Ireland over the last seven days.

The varying colours show how the weather has hit most of the western coast while some parts of the east have avoided any major downpours. Some places in Cornwall, South Wales, Snowdonia, the North West and the Highlands have had more than six inches of rain in a week while other places like East Anglia and Aberdeenshire have had less than half a centimetre. The wettest place in the last 24 hours was Fylingdale in North Yorkshire where five inches fell. Earlier today pictures emerged of the dramatic moment that a motorist saved the life of another man by pulling him through the window of his car. UK weather: Britain on flood alert as forecasters predict a month's rainfall in just two days. Villagers in Halberton, Devon, forced to spend night sheltering in local hall Four women rescued from a trapped car submerged in 3ft-deep flood waterHouseboat broke free from moorings and came to rest against Oxford lockChildren rescued by boat after North Wales school was encircled by flooding100mph winds reported in Wales damaged buildings and left roads flooded By Andrew Levy and Mark Duell and Nick Mcdermott and Amy Oliver and Luke Salkeld.

Inch of rain hits the Midlands in just ONE hour after 'apocalyptic thunderstorm' Today train services between Scotland and England have been axed in the wake of yesterday's freak deluges that saw rail lines disappear underwater, landslips and fallen trees. In Shropshire yesterday, a 66-year-old retired schoolteacher was swept to his death when a normally gentle brook burst its banks after two hours of torrential rain causing a flash flood. Michael Ellis, 66, a retired deputy headteacher had been driving home after having blood tests at a nearby doctor's surgery when the sudden floods cut him off in the village of Bittlerley, near Ludlow, just half-a-mile from his home.