*****Water supply aid project v civil water wars: In Pakistan, a high mountain water pipe brings a bonus: ... Better water storage and a more secure supply mean conflicts over water are declining - and harvests are growing By Rina Saeed Khan SIKSA, Pakistan, Sept 17 (Thomson Reuters Foundation) - When a pipeline was installed last year to bring spring water and snowmelt to this village of 500 households in northern Pakistan, it brought something else as well: peace. 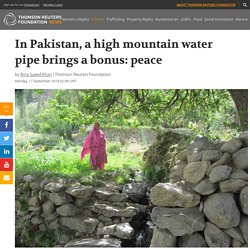 Previously, neighbours argued over the limited water that coursed through channels to the town. The community strictly regulated water use, with each household allowed half an hour of supply a week to irrigate their fields. Cheating brought arguments. To wash their clothes or to bathe, villagers had to clamber down to the river at the bottom of the valley. But not any more. "I would say 90 percent of our issues have now been resolved," said Shereen Akhtar, a resident and the locally elected representative to the Gilgit-Baltistan Legislative Assembly.

"We can now cook vegetables like okra and aubergines which was unheard of before. All-girl engineer team invents solar-powered tent for the homeless. As Daniela Orozco picks off excess plastic bordering a 3D-printed box, she recalls how many homeless people she saw on her way to school when she was a high school freshman. 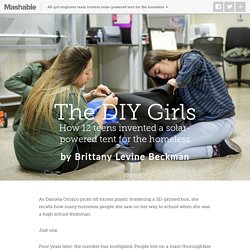 Just one. Four years later, the number has multiplied. People live on a main thoroughfare near the school, at a nearby park, and below the off-ramps and bridges in her hometown of San Fernando, which is about 20 miles northwest of downtown Los Angeles. In the San Fernando Valley, homelessness increased 36% to 7,094 people last year, according to the Los Angeles Homeless Services Agency's annual count.

Daniela and her friends wanted to help, but giving money wasn’t an option. "Because we come from low-income families ourselves, we can't give them money," the high school senior says. "We wanted to offer something besides money," her classmate, Veronica Gonzalez, chimes in. These drones, carrying blood and medicine to remote areas, are saving lives in Rwanda.… Air-conditioned lawnmower, 1961.… Reducing the Development Gap Strategies. 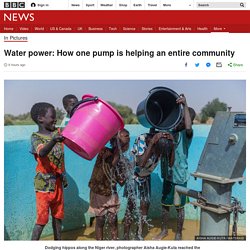 It is here that she connected with a community that, despite its proximity to the river, faces a daily struggle for clean water. Despite the countries' shared border, what Augie-Kuta saw was a far cry from that back home in Nigeria. With ox carts carrying water from the river through the dry landscape, she says travelling to the region is going back in time compared with her modern home in Nigeria's capital city, Abuja. In Niger, nine out of 10 people do not have a decent toilet and half the population does not have access to safe water. Recently, a borehole for drinking water was drilled, and the village now has working latrines. Farmer Hamadou Seydou's entire family was born in the village - he, his wife and three children.

"Our fears for the future are a return to the old times, especially for [poor] sanitation," he explains. *****Taking corners: Non-rectangular soccer fields keep kids off the streets (development project) How missing weather data is a 'life and death' issue. @PeterGWeather gave us a tour of an 'automatic weather station' hoping to provide more… This box provides you with electricity and water, anywhere. Africa's portable solar revolution is thwarting thieves enabling reliable refrigeration & irrigation.

This box provides you with electricity and water, anywhere. Meanwhile in Africa. *****BBC Radio 4 - Radio 4 Appeal by Simon Reeve, Practical Action. Fast-tracking development: A Ugandan village’s experience. As you climb up the winding reddish-coloured gravel road to Ruhiira - past endless dense plantations of matoke bananas - it can feel at first sight as if it is a world largely unchanged from when I was first working in Uganda close to 50 years ago. 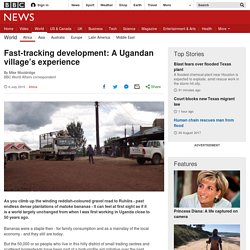 Bananas were a staple then - for family consumption and as a mainstay of the local economy - and they still are today. But the 50,000 or so people who live in this hilly district of small trading centres and scattered homesteads have been part of a high-profile aid initiative over the past nine years. It is one of the locations across Africa chosen by the US economist Jeffrey Sachs to establish Millennium Villages - intended to be a model for accelerating the end of global poverty. The Millennium Villages concept has been backed by the United Nations, preparing a string of summits this year as the world marks a transition from the Millennium Development Goals to broader and more ambitious Sustainable Development Goals. *****Mosquito Wars. Bug Zappers By Bill Gates | August 15, 2017 We’ve come a long way since the days of blaming the stars. 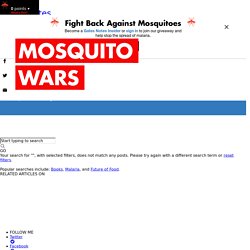 Malaria has terrorized humankind for thousands of years, but for most of that time, we had no idea what caused it. The ancient Greeks thought Sirius the dog star might be responsible. Today, we know exactly who our enemy is: the mosquito. *****Video "Japan's Support for the Solution of Water Problems: Cambodia full version" @ICSUnews Linking up the SDGs Key to food & nutrition security @CGIAR #SDGs #foodsecurity. *****These interlocking houses could help solve the refugee crisis. ***** Making dirty water drinkable: @IOM_Somalia is using Polyglu to treat drinking #water and help Somalis affected by the recent #drought. 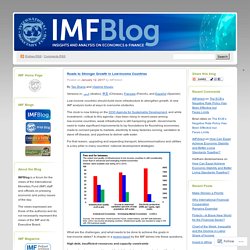 These paper-airplane drones may one day save your life - Recode. ***Drone-based blood deliveries in Tanzania to be funded by UK - BBC News. Image copyright Dfid The UK government is to fund a trial of drone-based deliveries of blood and other medical supplies in Tanzania. 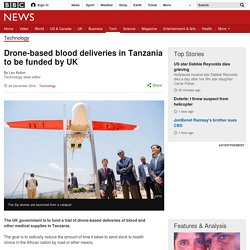 The goal is to radically reduce the amount of time it takes to send stock to health clinics in the African nation by road or other means. In April, Japan & Panama signed an agreement to construct the 1st monorail project in Central America! Read more. The fog catcher who brings water to the poor. Is Cadbury's move the end for Fairtrade? Roll a Hippo. Hippo Water Roller: This Wheelbarrow is not a Wheelbarrow.