Agony and Ecstasy of Apple

Monologues. “What distinguishes him from most solo performers is how elegantly he blends personal stories, historical digressions and philosophical ruminations. 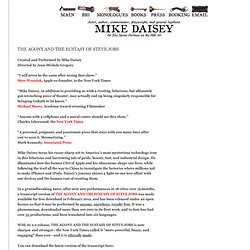 He has the curiosity of a highly literate dilettante and a preoccupation with alternative histories, secrets large and small, and the fuzzy line where truth and fiction blur. Mr. Daisey’s greatest subject is himself.” NEW YORK TIMES Mike Daisey has been called “the master storyteller” and “one of the finest solo performers of his generation” by the New York Times for his extemporaneous monologues. Below you'll find summaries of his twelve full-length monologues, production histories, links to reviews and more. How Theater Failed America. Mdaisey's channel. 'Cult' Hero Mike Daisey. The corporations represented at Foxconn plant. 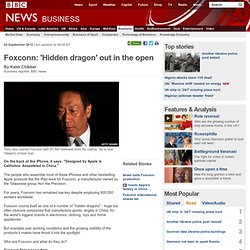 He is now Taiwan's richest man On the back of the iPhone, it says: "Designed by Apple in California. Assembled in China. " The people who assemble most of these iPhones and other bestselling Apple products like the iPad work for Foxconn, a manufacturer owned by the Taiwanese group Hon Hai Precision. For years, Foxconn has remained low-key despite employing 800,000 workers worldwide. Transcript. Mike Daisey. 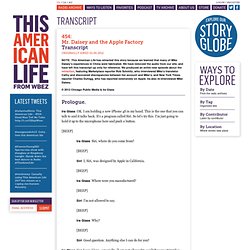 Retraction. Watch the Sequel to 'Sh*t Apple Fanatics Say' If you couldn't get enough of the "Shit Apple Users Say" video we posted yesterday, be sure to check out the sequel. 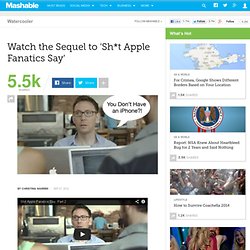 Aptly titled "Shit Apple Fanatics Say, Part 2," the video just hit YouTube. The original video has earned almost 300,000 views since we first wrote about it and with any luck, the sequel will also hit it big. Does Apple Make $30 Per iPhone for Every Dollar it Pays Workers to Make Them? Apple controlled less than 10 percent of the global handset market last year but by some accounts hauled in 50 percent or more of the industry's available operating profits. 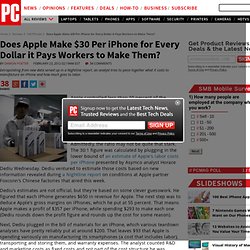 It helps when you're making nearly $30 in profit on an iPhone for every dollar you pay the workers who make them. Admittedly, the ratio may not be quite that stark. The 30:1 figure was calculated by plugging in the lower bound of an estimate of Apple's labor costs per iPhone presented by Asymco analyst Horace Dediu Wednesday. How much does it cost to manufacture an iPhone? An iPhone generates approximately $650 in revenue for Apple. 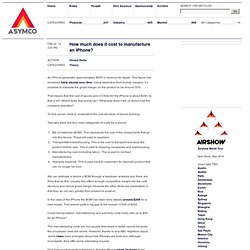 This figure has remained fairly steady over time. Using deduction from overall margins, it’s possible to estimate the gross margin on the product to be around 55%. That means that the cost of goods sold (COGS) for the iPhone is about $293. Foxconn Technology. Former Foxconn Managers Detained in a Bribery Case By DAVID BARBOZA Authorities are investigating whether several former managers accepted millions of dollars in bribes from partners of the electronics maker, which is a main supplier to Apple. 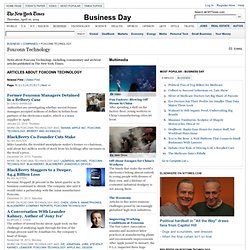 January 23, 2014, Thursday BlackBerry Co-Founder Cuts Stake By IAN AUSTEN Mike Lazaridis, the troubled smartphone maker’s former co-chairman, sold about $27 million worth of stock from his holdings after increases in the stock’s price. December 24, 2013, Tuesday BlackBerry Staggers to a Deeper, $4.4 Billion Loss Revenue dropped 56 percent in the latest quarter as its business continued to shrink.

December 21, 2013, Saturday. iPhone Only Costs $250 to Make; Rest of Price is Fanboy Tax. Warehouse Management System. Update: This is my 2007 article on the Apple iPhone Supply Chain Analysis. 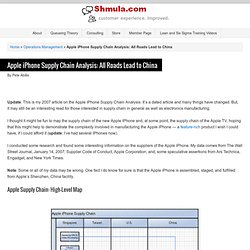 It’s a dated article and many things have changed. But, it may still be an interesting read for those interested in supply chain in general as well as electronics manufacturing. I thought it might be fun to map the supply chain of the new Apple iPhone and, at some point, the supply chain of the Apple TV, hoping that this might help to demonstrate the complexity involved in manufacturing the Apple iPhone — a feature-rich product I wish I could have, if I could afford it (update: I’ve had several iPhones now). Theatre on Film and Tape Archive. Third Floor Phone: (212) 870-1642 Fully accessible to wheelchairs Researchers must call (212) 870-1642 to make a viewing appointment. 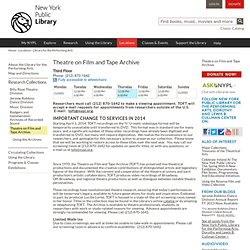 TOFT will accept e-mail requests for appointments from researchers outside of the U.S. E-mail: toft@nypl.org. Starting April 1, 2014, TOFT recordings on the ¾” U-matic videotape format will be temporarily unavailable until transferred to DVD. 1 Million Workers. 90 Million iPhones. 17 Suicides. Who's to Blame? The work at Foxconn's Shenzhen plant can be repetitive, exhausting, and alienating—like manufacturing jobs anywhere in the world.Photo: Tony Law It’s hard not to look at the nets. 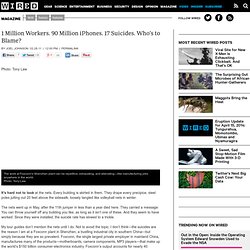 Every building is skirted in them. They drape every precipice, steel poles jutting out 20 feet above the sidewalk, loosely tangled like volleyball nets in winter. The Agony and the Ecstasy of Steve Jobs.