The quickest way to find images with iOS 9. News Apple and Samsung are bitter rivals in the tech industry that make a lot of the same type of products, but when it comes to innovation, the two are complete opposites. 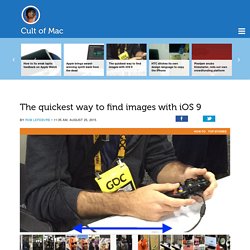 Arno Lenior is one of the few people on the planet who’s worked at both companies, and while Samsung gets a bad rap for copying Apple’s products, the former Apple marketing director reveals that in many ways, Samsung takes innovation just as seriously as they do in Cupertino, otherwise it would have never been able to go from a company that sold rice nearly 100 years ago, to transforming into one of the world’s top TV and smartphone manufacturers.

Now that Lenior left Samsung back in May, MarketingMag sat down with the Australian marketer to get his viewpoints on innovation and how it’s become part of the mindset at Apple. MLB tried to ban coach from wearing the Apple Watch it gave him. Closed captioning is useful to those with a hearing impairment to make the audio of videos accessible. 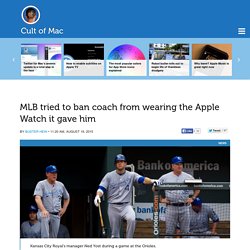 Subtitles help those who speak a different language understand what’s going on in a film not in their original language. You can enable these features on your Apple TV, but it’s not super-intuitive — there’s no single button to make it happen. However, that doesn’t mean it isn’t easy. Here’s how to turn on Apple TV subtitles, even if you just want to watch a scary movie at night and have the sound turned down. Apple’s iPhone 6s Is Coming In September, Is It Worth The Wait? Here’s What You Can Expect. New Apple iPhones are about as regular a yearly occurrence as the leaves changing colors, and the release date for Apple’s next iPhone is quickly approaching. 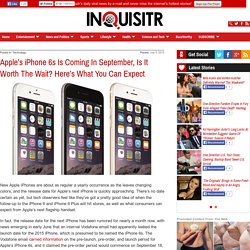 There’s no date certain as yet, but tech observers feel like they’ve got a pretty good idea of when the follow-up to the iPhone 6 and iPhone 6 Plus will hit stores, as well as what consumers can expect from Apple’s next flagship handset. In fact, the release date for the next iPhone has been rumored for nearly a month now, with news emerging in early June that an internal Vodafone email had apparently leaked the launch date for the 2015 iPhone, which is presumed to be named the iPhone 6s. The Vodafone email carried information on the pre-launch, pre-order, and launch period for Apple’s iPhone 6s, and it claimed the pre-order period would commence on September 18, with the next-gen iPhone officially releasing on September 25. 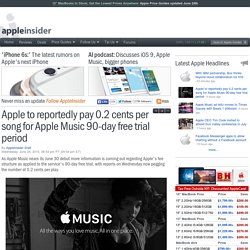 Citing music executives familiar with the matter, The New York Times reports Apple's deal with labels has the company shelling out 0.2 cents for songs streamed during a free 90-day Apple Music trial period. The amount is comparable to free tier rates paid by competing streaming services, sources said. In addition to the per-play fee, Apple is also paying a smaller sum to publishers for songwriting rights. Publishing companies confirmed that negotiations are still in flux less than one week from Apple Music's launch. 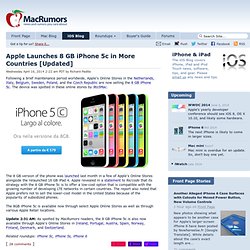 The product of developers @Sentry_NC and QusicS, the new tweak includes a number of features including a unified view for the Control Center and app switcher, a Quick Switcher for moving between apps using gestures, a hot corners feature that allows access to apps by touching the corners of an iOS device, and more. Unlike the stock iOS 7 experience, Auxo 2 allows users to access the app switcher, multitasking controls, and Control Center toggles entirely with the use of gestures, all while combining all three elements into one interface and offering a variety of settings for customization. Auxo 2’s flagship feature is the Quick Switcher, which allows users to switch between apps by swiping from the bottom left of a device and releasing a finger on an open app. By default, the Quick Switcher is limited to six apps, but users may enable an unlimited amount of apps in the settings.