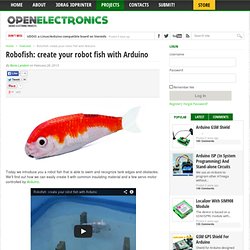 We’ll find out how we can easily create it with common insulating material and a few servo motor controlled by Arduino. The mechanical part For the fish body we used common polystyrene as the one used as insulating material for walls. Inexpensive, very robust and lightweight: it floats easily and is easily moldable. Great deal. To make fish’s swimming more realistic, we need three joints between the trunk and the caudal fin. The flexibility of the fin allows you to give more realism to movement. Obviously Robofish needs a system to detect obstacles such as the tank edges.

Position the sensors on the front, tilted to 45°, one on left and one on the right. Electrical connections. Compressorhead. Over-Dramatic Mannequin Promises To Make Computer Animation Easy. ･Robots A-Z. There are currently 527 robots listed alphabetically hereDates are approximate (may be the year the robot began development, or the year in which it was first unveiled to the public). 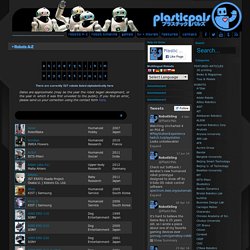 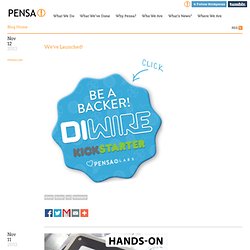 We had a great weekend at Expand NY! The DIWire won the Judge’s Choice Award for Engadget’s Insert Coin competition.Here are some highlights:DIWire Presentation and Q+A With JudgesAnnouncing DIWire as a Winner / Closing RemarksIn Depth Write Up and Images from Conference Vote for us! The DIWire has been selected as one of the 20 contenders in Engadget’s Insert Coin competition! Heather Knight and Data: A Researcher and a Robot Walk Into a Bar... Project Sentry Gun. DARwIn-OP - DARwIn-OP. DARwIn OP: Open Platform Humanoid Robot for Research and Education - RoMeLa. 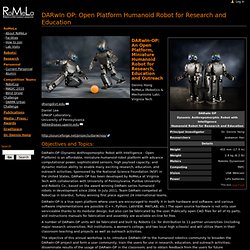 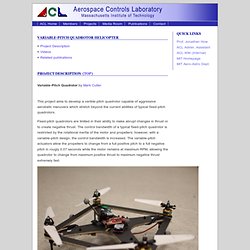 Robo-Flytrap Turns Insect Lifeblood Into Power. Electropermanent Magnets: Programmable Magnets with Zero Static Power Consumption Enable Smallest Modular Robots Yet. Take a moment and envision an electromagnet: a simple coiled wire driven by a hefty electrical current gives a fully-programmable magnetic field strength (on, off, and everything between). 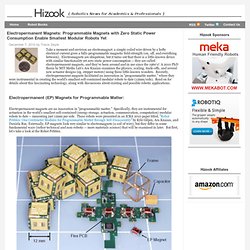 Electromagnets are ubiquitous, but it turns out that there is a little-known device with similar functionality yet zero static power consumption -- they are called electropermanent magnets, and they've been around and in use since the 1960's! A 2010 PhD thesis by MIT Media Lab's Ara Knaian examines the physics, scaling, trade-offs, and several new actuator designs (eg. stepper motors) using these little-known wonders. Recently, electropermanent magnets facilitated an innovation in "programmable matter," where they were instrumental in creating the world's smallest self-contained modular robots to date (12mm/side).

Read on for details about this fascinating technology, along with discussions about existing and possible robotic applications. New Soft Robots Use Electropermanent (EP) Magnet Valves and Hydrogen Peroxide "Pneumatic Battery" I would like to introduce you to a new "elastomeric rolling robot" -- a soft robot made of inflatable, silicone actuators that pressurize in sequence to make the robot move. 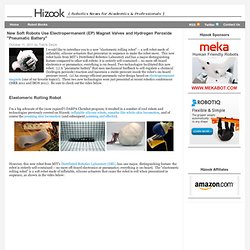 This new robot hails from MIT's Distributed Robotics Laboratory and has a major distinguishing feature compared to other soft robots: it is entirely self-contained -- no more off-board electronics or pneumatics; everything is on-board. Two technologies facilitated this new robot: (1) A "pneumatic battery" that uses mechanical feedback to self-regulate a chemical (hydrogen peroxide) reaction and maintain a stable pressure inside the robot's on-board pressure vessel. (2) An energy-efficient pneumatic valve design based on electropermanent magnets (one of my favorite topics!).

These two new technologies were just presented at recent robotics conferences (ISRR 2011 and IROS 2011). Be sure to check out the video below. Elastomeric Rolling Robot. AI & Robot. Everything robots. New material could offer hope to those with no voice. In 1997, the actress and singer Julie Andrews lost her singing voice following surgery to remove noncancerous lesions from her vocal cords. 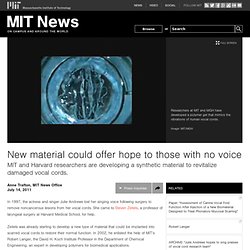 She came to Steven Zeitels, a professor of laryngeal surgery at Harvard Medical School, for help. Zeitels was already starting to develop a new type of material that could be implanted into scarred vocal cords to restore their normal function. In 2002, he enlisted the help of MIT’s Robert Langer, the David H. Koch Institute Professor in the Department of Chemical Engineering, an expert in developing polymers for biomedical applications. The team led by Langer and Zeitels has now developed a polymer gel that they hope to start testing in a small clinical trial next year. Robots: Zoobotics. Project Description. You've Never Seen a Robot Drive System Like This Before. Ollie- a DIY autonomous robotic blimp. AdWords We use AdWords to deploy digital advertising on sites supported by AdWords. 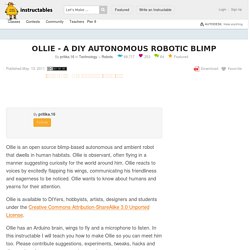 Center for Distributed Robotics, University of Minnesota. Documentation. Aldebaran Robotics, the creators of Nao. Mesmerizing. New Disposable, Medical Camera Is the Size of a Grain of Salt. Can you barely see this camera? 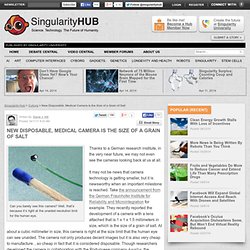 Well, that’s because it’s right at the unaided resolution limit for the human eye. Thanks to a German research institute, in the very near future, we may not even see the cameras looking back at us at all. It may not be news that camera technology is getting smaller, but it is newsworthy when an important milestone is reached. Take the announcement from the German Fraunhofer Institute for Reliability and Microintegration for example. They recently reported the development of a camera with a lens attached that is 1 x 1 x 1.5 millimeters in size, which is the size of a grain of salt. It’s clear that the Fraunhofer researchers didn’t set out to hit this milestone in camera technology.

All of this, however, would change if the camera was cheap enough to throw away. Tiny Camera...Huge Potential To accomplish this, the Fraunhofer researchers worked with Awaiba to redesign the endoscopes. Welkom op DelFly.nl. Build your own tiny Bristlebot  Eye - a kinetic scuplture. Robot bird soars through the sky. Catherine de Lange, reporter You could be forgiven for thinking the bird in this video is real, especially when filmed from a distance. But it's actually an energy-efficient robot, weighing just 500 grams, that captures the elegance of a bird in flight. The robot, aptly named SmartBird, has just been unveiled by Festo, the robotics company known for its bionic animal designs.

It has previously created penguins that can communicate with each other to avoid collisions and a robotic elephant's trunk designed to grip objects and safely interact with humans. SmartBird is modelled on the herring gull and can take off, fly and land while its flight is controlled remotely from the ground in real time. Quadrocopter Ball Juggling. RoboSavvy UK - Store.