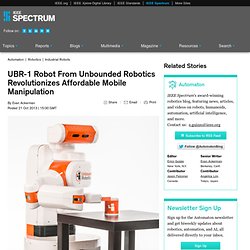 Unbounded has been working in stealth mode for the past year, but our best guess was that they were developing a low-cost mobile manipulator for research and education: something like a PR2, except (we were hoping) significantly cheaper. Today, Unbounded is unveiling UBR-1, a shiny new human-scale one-armed robot designed to completely revolutionize the market for research and education robotics and beyond, for just a tiny fraction of the cost of similar platforms. XRobots.co.uk - Android 12 REVB Leg Modifications 2. As I mentioned in the last part, the original knees look a bit weird, and also now I can control the joints properly I've found that they don't hinge in the right place. 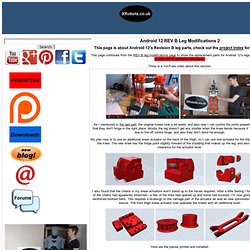 Mostly the leg doesn't get any shorter when the knee bends because it 'drops down' due to the off centre hinge, and also they don't bend far enough. My plan now is to use an additional linear actuator on the back of the thigh, so I can use one actuator for the thigh and one for the knee. Poppy Project. Logo and Remote control your Arduino Robot – Video tutorial. Logo and Remote control your Arduino Robot – Video tutorial Zoe Romano — October 18th, 2013 RS Components released the second video focused on the first steps with the Arduino Robot with Massimo Banzi, David Cuartielles and Xun Yang: In this video you will see where to find code examples on the IDE. 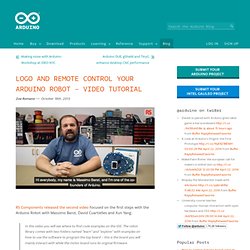 The robot library comes with two folders named “learn” and “explore” with examples on how to use the software to program the top board – this is the board you will mainly interact with while the motor board runs its original firmware.One of the first examples of coding on the Arduino Robot is called “LOGO” which is very similar to an early educational programming language that controlled a virtual turtle moving across the screen with simple instructions. This time however, instead of having a small virtual turtle running on a screen, we have a robot that can respond to commands demonstrating a basic example of movement. PiBot-B @RaspberryPi #piday #raspberrypi. October 18, 2013 AT 1:00 am PiBot-B @RaspberryPi #piday #raspberrypi Thomas Schoch’s PiBot-B: PiBot-B is a small mobile robot based on the Raspberry Pi. 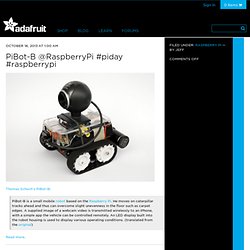 He moves on caterpillar tracks ahead and thus can overcome slight unevenness in the floor such as carpet edges. A supplied image of a webcam video is transmitted wirelessly to an iPhone, with a simple app the vehicle can be controlled remotely. Read more. Featured Adafruit Products Miniature 8×8 Yellow LED Matrix – BL-M07C881UY-11 – You will squeak with delight when you hold this adorable miniature LED matrix. 0.8″ square, it’s got everything a big LED matrix has, but bite sized! ROS on RaspberryPi - JR. 8-Mar-2014 - ROS Hydro with rosserial_arduino This install is based almost exactly on this ROS wiki page (~ Nov 2013) by JonStephan, with only a few details changed. 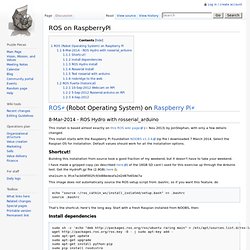 Haptic Telepresence Blog - Nightly. Indoor Navigation Robot using OpenCV. Interesting Project Having a Raspberry Pi myself, I have been amazed on the variety of solutions that can be done with a £25 ($35) computer. 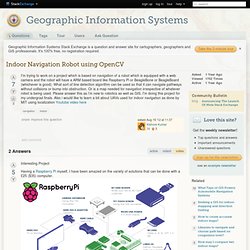 Update: This can be done and here is some proof: OpenSLAM.org. DORA - 柴火创客空间. 出自柴火创客空间 DORA Open Robot Assistant Project. 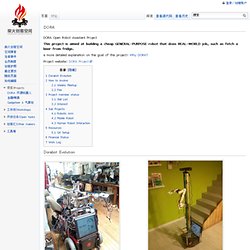 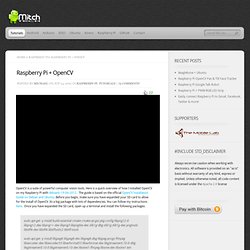 Here is a quick overview of how I installed OpenCV on my Raspberry Pi with debian6-19-04-2012. The guide is based on the official OpenCV Installation Guide on Debian and Ubuntu. Before you begin, make sure you have expanded your SD card to allow for the install of OpenCV. Its a big package with lots of dependencies. You can follow my instructions here. There are some dependency issues with the order of the install, mostly with regard to libjpeg issues, so be sure to install in this order. Next, pull down the source files for OpenCV using wget: wget Once finished downloading, extract the archive, remove the no longer needed archive (to save space), change directory to the top of the source tree, make a directory for the build, and change into it: tar -xvjpf OpenCV-2.3.1a.tar.bz2rm OpenCV-2.3.1a.tar.bz2cd OpenCV-2.3.1/mkdir buildcd build Next, you will need to configure the build using cmake. 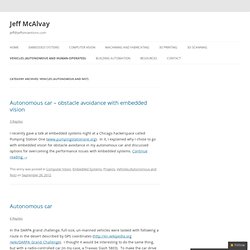 In it, I explained why I chose to go with embedded vision for obstacle avoidance in my autonomous car and discussed options for overcoming the performance issues with embedded systems. Continue reading In the DARPA grand challenge, full-size, un-manned vehicles were tasked with following a route in the desert described by GPS coordinates ( I thought it would be interesting to do the same thing, but with a radio-controlled car (in my case, a Traxxas Slash 5803). Biggest walking robot in the world. [Guiness World Record]