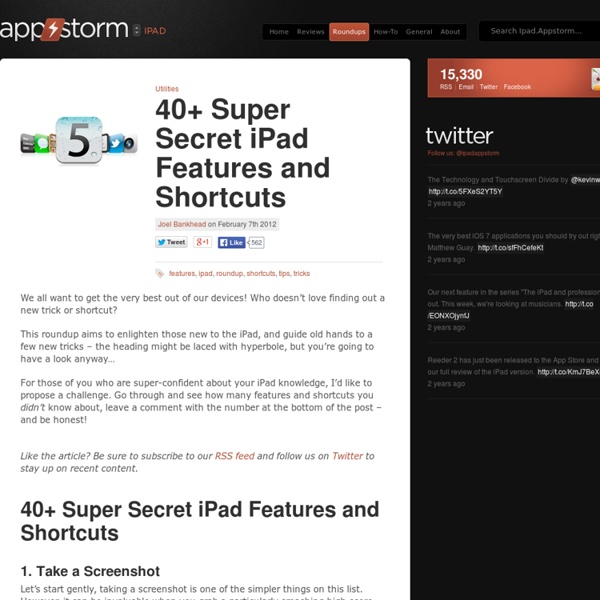 Myths about iOS, iPad, iPhone & iPod touch I have the pleasure of working with educators who get to use iPads and iPod touches with students. Wherever I facilitate workshops, I find there are some myths floating around about Apple's iOS devices, and I'd like to clear up some of the misinformation. iPad, iPhone, and iPod touch do not have user manuals. Gone are the days when you receive a thick printed user manual with your electronics purchase. iPad User Guide: PDF or iBooksiPhone User Guide: PDF or iBooksiPod touch User Guide: PDF or iBooks You have to have a credit card associated with your iTunes account. A credit card is not required when you create an iTunes account. First log out of any iTunes accounts you might be signed into. If you have already given iTunes a credit card number, you can log into your account and click to edit your payment information. You can buy an app once and install it on all devices in the classroom or school. The Volume Purchase Program is only for paid apps. You need a Mac to sync multiple devices.

50 really useful iPad tips and tricks With great new features like two video cameras, a faster processor and a Retina display, the new iPad is the world's best tablet device. It's also fully capable of running the latest version of Apple's iOS operating system and great apps like iMovie and GarageBand. Here we present 50 really useful iPad tips. We cover everything from customising your Home screen through to getting more from built-in apps like Mail and Safari. 10 best tablet PCs in the world today The vast majority of these tips will also work on the original iPad and iPad 2, so owners of any generation of iPad shouldn't feel neglected. For 50 more iPad tips, check out a new iPad app called 100 Tricks & Tips for iPad 2, brought to you by our colleagues on MacFormat. 1. iOS now supports folders. Your iPad will create a folder with both the apps in. 2. Double-clicking the Home button shows you all the apps that are running on your iPad in a bar along the bottom of the screen. 3. 4. 5. 6. 7. The iPad supports a VPN connection.

My day with Siri I admit it: I love Siri. It helps that I work from home, so I can talk to my phone without inhibitions. It doesn't hurt that I generally crave pseudohuman contact. But the real reason is simply that I find Siri so useful. And in iOS 6, Siri has become even more useful than it was before. The iOS virtual assistant has learned to respond accurately to a variety of new instructions. I now find myself using Siri throughout the day, for a wide variety of tasks and queries. Morning routines First thing in the morning, I wake up to one of my kids clomping into my room. Once I know how warmly to dress that day, I find out what kinds of clothes I should put on. Armed with that intel, I’m off to shave and shower. The workday begins It’s rare that a workday of mine gets under way without a reminder or two from the night before beeping on my Mac and iOS devices, something like “Write the Siri story”—almost undoubtedly a reminder I set via Siri. Siri knows The dinner hour Evening Throughout the day

s Essential iPad Apps Primer: A Crash Course In Cool Camera Apps Let’s face it — there are too many camera and photo sharing apps out there, and not enough time in the day to give each one of them a try. If you’ve been mulling over which camera app deserves your love and affection, or just have no earthly idea where to start, take a gander below at some of your best options for shooting and sharing your life on the go. For the socialites: Instagram Does this thing really need an introduction? Instagram took concept of applying artsy filters (the app has 16 of them), and combined it with a strong social element to become the mobile photo sharing service to beat. Aside from its famed filters, Instagram also packs a slew of other features — dead simple tilt-shift functionality, one-touch tweaks for lighting and exposure, and so on. Available on: iOS (Free) Sample Photos: Instagre.at StreamZoo As far as the game aspect goes, users gain points every time they upload a photo, not to mention every time another user likes or comments on the image. Camera+ Blurtt

10 extremely awesome iPad tips and tricks | 11 of 11 As you're most likely aware of, there are some default apps on the iPad that are there to stay. They can't be deleted, but they can all be moved into a group... that is, all but one: Newsstand. Yes, this annoying app (to me, at least) is never used by many iPad users, yet Apple's made it such that you cannot delete it or even put it in a group. From your home screen, long-press an app to get the apps to jiggle. Since I don't ever use any of the default apps (outside of the App Store, iTunes, and Game Center), I have an app group titled "Default Apps." Need gadgets or gift ideas? 10 Things You Never Knew You Could Do On Your iPad — Apple News, Tips and Reviews How To Setup Parental Controls (Restrictions) on the iPad The iPad is a wonderfully easy and intuitive device to use. This is generally nothing but a major advantage – but at times it can cause issues if you have children who share your iPad or are allowed to use it from time to time. Problems you might encounter range from a child inadvertently deleting a frequently-used app to discovering that your child’s favorite new iPad game has allowed them to rack up hundreds of dollars worth of charges to your credit card via In-App purchases. Fortunately, the iPad (and iOS) comes with a strong set of parental controls that you can choose to apply to reduce the chances of seeing any problems when you allow your kids to use an iPad, it’s a shared one or one of their own. On the iPad these are called Restrictions – and here’s a quick rundown of how they can be setup: You’ll find these controls in the iPad’s Settings app – under Settings > General > Restrictions. There are four sections to the Restrictions area. Allow Allow Changes Allowed Content Game Center

5 Awesome Things You Can Do With an IPad and an LCD Projector 50 Fantastic Free iPad Apps We all love getting something great for free! However, hunting down the good free iPad apps from the terrible ones in the jungle of the App Store can be a difficult job. Fortunately for you, I’m here to help. We’ll try and keep a mix of old classics and new favourites, read on and stock up on fantastic free iPad apps! Like the article? Be sure to subscribe to our RSS feed and follow us on Twitter to stay up on recent content. Flipboard Flipboard is one of the most popular news readers for the iPad due to its fantastic, intuitive interface and its sheer ease of use. Planetary Planetary is a fascinating way to explore your music collection that’s only available on the iPad. We recently reviewed Planetary and found it to be a simply stunning free offering for the iPad. Zite Zite is a great way to consume all kinds of news and articles, that gradually learns your preferences and what you like to read. The Onion If you’re not already a fan of The Onion, you probably should be. IMDb Remote Paper 500px