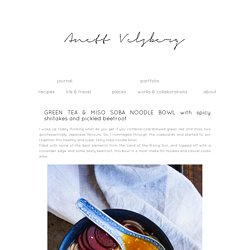 So, I rummaged through the cupboards and started to put together this healthy and super tasty soba noodle bowl. Filled with some of the best elements from the Land of the Rising Sun, and topped off with a coriander edge and some zesty beetroot, this bowl is a must–make for foodies and casual cooks alike. Ingredients 2 cups of hot water 2 green tea bags 2 large cloves of garlic, minced thumb-size piece of ginger 1 tbsp chilli flakes oil, for frying 2 cups vegetable stock 2 tbsp miso paste soy sauce, to taste 1 tbsp lime juice salt, to taste pepper, to taste 3-4 shiitake mushrooms, thinly sliced 1/2 tbsp Sriracha or another hot sauce squeeze of lime juice toppings: pickled beetroot (recipe here) nori sheets sesame seeds coriander spring onion Method Cook soba noodles in salted boiling water for 4 minutes.

Pour boiling water over the tea packs and leave for 3-4 minutes. Carrot, Tomato & Coconut Soup. And just like that, we are a family of four. 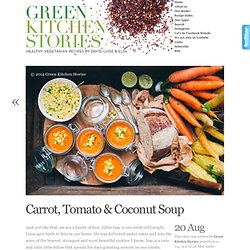 Little Isac is one week old tonight. Luise gave birth to him in our home. He was delivered under water and into the arms of the bravest, strongest and most beautiful mother I know. Isac is a cute and calm little fellow that spends his days grunting around on our chests, eating and then dozing away in sleep. We are spoiling him with hugs and kisses and eventually we will also spoil him with home cooked food that makes him a healthy and strong plant eater. We could go on and on about him forever, but we actually also have a new recipe for you. This is also a great recipe if you are on a budget. Carrot, Tomato & Coconut Soup Serves 4-6 Heat oil in a pot. 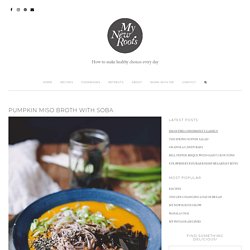 Carrots, sure. Cabbage, indeed. Potatoes, definitely. But even though they seem to have caught on to the Halloween jack-o-lantern carving thing, actually consuming pumpkins is not high on their list. Just last week I was at the grocery store and saw a display of huge spaghetti squash on clearance, being promoted as “autumn decorations”. So aside from decorative (and reminder: totally edible) spaghetti squash, there is really only one proper pumpkin here in Denmark, and that is the Hokkaido. THAI RED CURRY NOODLE SOUP with shiitakes and broccolini. As you might be able to tell, I’m kind of into Asian food. 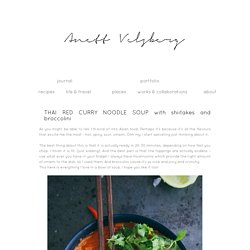 Perhaps it’s because it’s all the flavours that excite me the most – hot, spicy, sour, umami. Ohh my, I start salivating just thinking about it. The best thing about this is that it is actually ready in 20-30 minutes, depending on how fast you chop. I finish it is 10. (just kidding). This here is everything I love in a bowl of soup. Ingredients 2 large garlic cloves, minced thumb-size piece of ginger, minced oil for frying 750 ml vegetable stock 400 coconut cream 4 tbsp Thai Red Curry Paste lime juice from 1/2 lime soy sauce, to taste salt, to taste pepper, to taste 4 shiitakes, thinly sliced handful on broccolini, roughly chopped 1 packet of rice noodles, cooked in boiling water until tender handful of coriander sesame seeds Method Heat oil in a medium-sized pot.

While the broth is simmering, heat oil in a pan and add the shiitakes. To serve, place rice noodles in a bowl. ROASTED TOMATO SOUP — Sprouted Kitchen. I find it funny that when you fall in love with someone, and even more so when you marry/live with them, you kind of morph into an unintentional, uni-person at times. 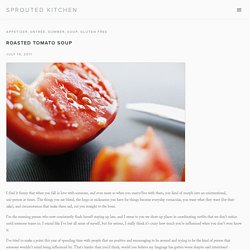 The things you eat blend, the lingo or nicknames you have for things become everyday vernacular, you want what they want (for their sake), and circumstances that make them sad, cut you straight to the bone. I'm the morning person who now consistently finds herself staying up late, and I swear to you we show up places in coordinating outfits that we don't notice until someone teases us. I sound like I've lost all sense of myself, but for serious, I really think it's crazy how much you're influenced when you don't even know it. I've tried to make a point this year of spending time with people that are positive and encouraging to be around and trying to be the kind of person that someone wouldn't mind being influenced by. That's harder than you'd think, would you believe my language has gotten worse despite said intentions? Thai chicken and sweet potato soup.