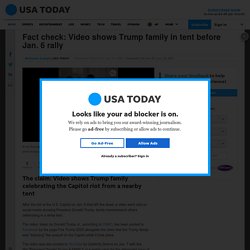 " USA TODAY The claim: Video shows Trump family celebrating the Capitol riot from a nearby tent After the riot at the U.S. Capitol on Jan. 6 that left five dead, a video went viral on social media showing President Donald Trump, family membersand others celebrating in a white tent. The U.S. Capitol violence could happen in Canada — here are 3 ways to prevent it. Canadians should not view the recent mob violence in Washington as a uniquely American problem. 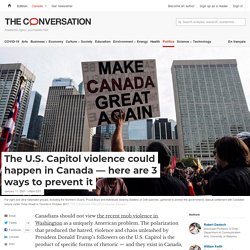 The polarization that produced the hatred, violence and chaos unleashed by President Donald Trump’s followers on the U.S. Capitol is the product of specific forms of rhetoric — and they exist in Canada, too. What will keep them from boiling over into violence? We ought to worry when we see increasing political polarization, and we need to view Jan. 6, 2021, as a reminder that we’re not immune. Words create worlds, and so violent rhetoric begets violent action. John Ivison: Trudeau's half-brother is an anti-vaxxer, bitcoin entrepreneur and (affectionate) critic of the PM. What is clear is that to its adherents like Kemper, it is less a payments system than a philosophy. 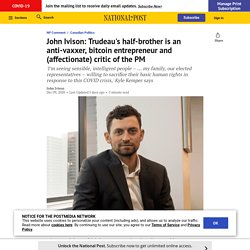 While not overtly partisan, Kemper has not shied away from views that Trudeau would disown. He has re-tweeted conspiracy theories about election fraud in the U.S. and promoted ideas that Trudeau’s Liberals found so reprehensible they called for a Conservative MP holding them to be kicked out of the Opposition caucus. On social media, Kemper urged people to sign petition e2961, which was sponsored in the House of Commons by Conservative Derek Sloan. It calls COVID vaccination “human experimentation” and suggests there could be serious adverse effects to taking it. On his Facebook page, Kemper blasted “the great reset” and people “who think 100 per cent of the planet needs to be vaccinated with an experimental concoction to prevent a disease with a 99 per cent recovery rate. The one good thing Donald Trump's assault on democracy has done for America. It's undermined confidence in our free and fair elections. 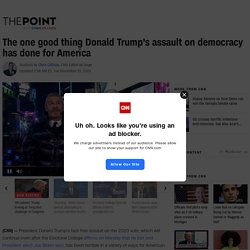 It's further divided the country along political lines. It's endangered election officials for just doing their jobs. The GOP's 'outrageous' effort to overturn the election and its deference to Trump cements its status as 'a willing party to authoritarianism' This year has taught us that democracy is not unshakeable. Death threats, intimidation and fear for U.S. democracy — the fallout of Trump's refusal to concede. A disturbing pattern is rippling through American swing states as election officials report different versions of the same disconcerting story: intimidation and, in some cases, death threats over their role in the counting of ballots in the Nov. 3 presidential election. 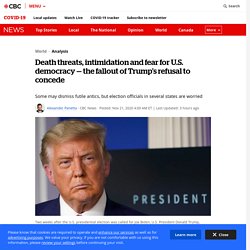 One prominent election official in a key state where U.S. President Donald Trump is contesting the results told CBC News, on condition of confidentiality, that police are now making regular rounds past the family home after the official received multiple threats over the election results. Others report similar concerns. What if Donald Trump wins again? What if he wins? 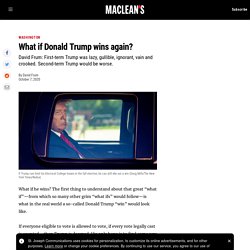 The first thing to understand about that great “what if”—from which so many other grim “what ifs” would follow—is what in the real world a so-called Donald Trump “win” would look like. Fifty years after the October Crisis, Quebec still occupies a special place in the national identity. This was deeply contradictory for Canada, in which national unity was brokered rather than won on the battlefield. 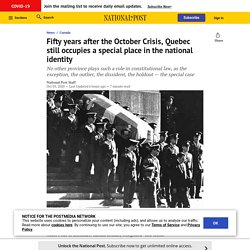 “We French, we English, never lost our civil war, / endure it still, a bloodless civil bore,” wrote the poet Earle Birney in 1962. “No wounded lying about, no Whitman wanted. / It’s only by our lack of ghosts we’re haunted.” That’s the kind of thinking that jinxes peace. Diane Francis: The debate shows democracy and rule of law are on the line in America. To all but his most loyal supporters, Trump disqualified himself by ducking two questions posed by the moderator: “Will you condemn white supremacists?” 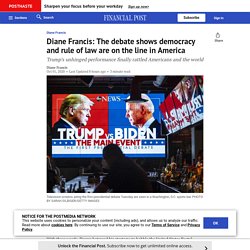 And “Will you accept the results of the election?” A refusal to answer either question is evidence that he does not believe in democracy or the rule of law, and intends to wreak havoc during the upcoming election to stay in office or to leave a mess on his way out. This means that the United States must impose as many preventative measures as possible to protect the system and the economy. New Acropolis lighting system brightens Athens' 'eternal compass' 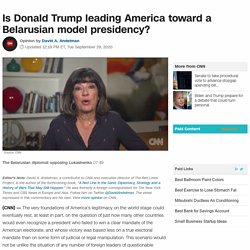 The United States no longer recognizes Alexander Lukashenko as the "legitimately elected leader" of Belarus, the State Department recently confirmed in a statement from a spokesman to CNN. "The path forward should be a national dialogue leading to the Belarusian people enjoying their right to choose their leaders in a free and fair election under independent observation," said the spokesman. Hardly surprising. The European Union's foreign policy chief and several European governments have issued similarly worded statements. Right now, Lukashenko has few allies in his corner beyond Russian President Vladimir Putin, who has supported his neighbor and (some might argue) political soulmate for decades.

But one central question remains. Untitled. Russia is backing Donald Trump, China is supporting Joe Biden and Iran is seeking to sow chaos in the US presidential election, a top intelligence official has warned in a sobering assessment of foreign meddling. 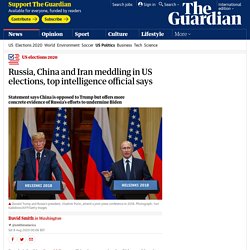 The statement on Friday by William Evanina, director of the National Counterintelligence and Security Center, raises fears of a repeat of the 2016 election, when Russia manipulated social media to help Trump and hurt his opponent Hillary Clinton. “Russia is using a range of measures to primarily denigrate former Vice President Biden and what it sees as an anti-Russia ‘establishment’,” Evanina said. “This is consistent with Moscow’s public criticism of him when he was Vice President for his role in the Obama Administration’s policies on Ukraine and its support for the anti-Putin opposition inside Russia.” Untitled. WASHINGTON — The confluence of a pandemic, a raucous civil-rights movement, an economy on the brink and a stubborn, deeply divided electorate: experts call it a "perfect storm" of conditions in which to sow the seeds of disinformation and partisan strife in the United States.

Too perfect, in fact. Given the hard lessons of the 2016 U.S. election, it's safe to assume that bad actors, foreign and domestic alike, are already hard at work trying to take full advantage of the discord, said Jed Willard, a Harvard University expert on information warfare. But much of the work is being done for them — partisan battles over masks, economic lockdowns and Black Lives Matter protests, inflamed by joblessness and uncertainty, have ripped more holes in America's social fabric than any disinformation peddlers could ever hope to do themselves. It's also extremely outlandish and implausible — too much so, in fact, for foreign disinformation agents in Russia and China. How is this fucknugget still on Twitter? Home / Twitter.

China threatens 'countermeasures' against UK over Hong Kong crisis. Beijing has responded with defiance to international criticism of its Hong Kong national security law, threatening countermeasures against the UK and the US and describing Washington’s efforts to raise the issue at the UN security council as “pointless”. One day after Beijing’s legislature approved plans to move ahead with sweeping anti-sedition legislation in Hong Kong, foreign ministry spokesman Zhao Lijian warned countries that Hong Kong is “purely an internal Chinese matter” and that “no other country has the right to interfere”. In response to the vote, the British foreign secretary, Dominic Raab, said the UK would extend the rights of up to 300,000 British national overseas passport holders in Hong Kong if China persisted with the law. What ‘liberty’ really means to gun-wielding lockdown protestors in America.

News reporters become subjects of ire at anti-lockdown protests. I usually come up short when I reach for words to describe the radicalization of the far right in America. 'The ship is sinking': Bolsonaro battles to block foul-mouthed cabinet video. Hillary Clinton calls armed Michigan lockdown protests 'domestic terrorism' The 2020 issue that matters is democracy itself. A new report shows freedom is declining in established democracies — including ours. The coronavirus’s threat to democracy itself. Where would U.S. democracy head in a second Trump term? Hungary and Poland show the answer. © Tamas Kovacs/AP FILE - In this March 23, 2020, file photo, Hungarian Prime Minister Viktor Orban delivers his speech about the current state of the coronavirus outbreak during a plenary session in the House of Parliament in Budapest, Hungary. The Hungarian Parliament granted Orban the power to rule indefinitely by decree, unencumbered by existing laws or judicial or parliamentary restraints.

One aspect of the law ostensibly passed to cope with the coronavirus calls for prison terms of up to five years for those… Rob Berschinski is senior vice president for policy at Human Rights First. He was deputy assistant secretary of state for democracy, human rights and labor from May 2015 to January 2017. A dismal portrait of democracy. Where would U.S. democracy head in a second Trump term? Hungary and Poland show the answer.