For weeks, Mr. Trump had urged his supporters to go to Washington Jan 6th to stop the certification of the election results, and several simultaneous rallies were planned for that Wednesday.

As the morning arrived, hundreds assembled on the Capitol lawn, more than a mile away from where Trump works soon speak near the White House. Among them are the Proud Boys, a far-right group.


11:50 a.m. At the same time, near the White House, Donald Trump Jr. films the president and his inner circle backstage before his father’s speech. In a video uploaded to his Facebook page, they are listening to the song “Gloria” and marveling at the size of the crowd.

At this moment, the Capitol grounds are protected by temporary perimeter fences, and there are few officers equipped to defend them. Supporters leave the rally in a steady stream before Mr. Trump’s speech ends, and they head toward the Capitol.

As they arrive, at the Capitol, another crowd of Trump supporters that has already gathered along the west perimeter fence becomes more agitated.

The mob quickly breaks through three additional barricades, forcing officers back onto the west Capitol steps.

chamber the steps, the group clashes with a small contingent of officers. After a few minutes, Capitol Police officers in riot gear arrive to help control the crowd.

2/2/21: The Capitol Rioters Aren’t Like Other Extremists. Peter Wehner: Republicans own this insurrection By these standards, 20 of the Capitol arrestees we studied— one-tenth—can be classified as supporters of gangs, militias, or militia-like groups such as the Proud Boys, Oath Keepers, and Three Percenters. 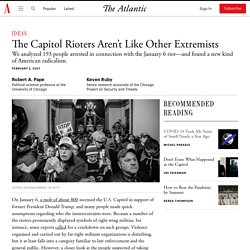 The role that such groups played in the riot has attracted considerable news coverage. But 89 percent of the arrestees have no apparent affiliation with any known militant organization. Connections were far more common among the suspected right-wing extremists arrested after incidents of deadly violence from 2015 to 2020. Of these, 26 percent were members of white-nationalist gangs (including skinhead groups and the Aryan Brotherhood), and 22 percent were part of militias and other organized groups (such as the Oath Keepers and Three Percenters). 1/25/21: Follow the Money Behind the Capitol Riot. Donald Trump is the first president to be impeached twice. 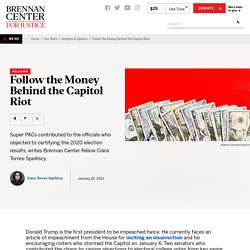 He currently faces an article of impeachment from the House for inciting an insurrection and for encouraging rioters who stormed the Capitol on January 6. Two senators who contributed the chaos by raising objections to electoral college votes from key swing states now face Ethics Committee investigations. And some members of Congress stand accused of leading reconnaissance tours on January 5 for the would-be rioters. But who funded these elected officials and their campaigns? 1/15/21: Uihlein funded U.S. Capitol protest group. According to the story, “on the website for the rally, the Tea Party Patriots were among 11 groups listed as ‘participating in the March to Save America’ as part of the ‘#StopTheSteal coalition.’” 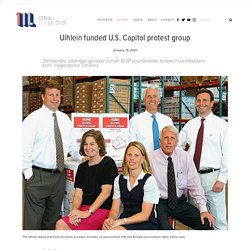 Mihalopoulos took pains to point out that a Tea Party Patriots leader called on protesters to “keep it peaceful” the day of the rally, but that didn’t stop President Trump from calling on them to “fight” and march up Pennsylvania Avenue to the U.S. Capitol, where they stormed the steps and invaded the building, halting congressional certification of the election and eventually leading to five deaths, including one Capitol Police officer beaten over the head by rioters with a fire extinguisher. Mihalopoulos reported Friday that the Uihleins were not responding to requests for comment. “Republican AGs should refuse contributions from donors like the Uihleins,” Rankin added. 1/7/21: Loss of USCP Officer Brian D. Sicknick. At approximately 9:30 p.m. this evening (January 7, 2021), United States Capitol Police Officer Brian D. 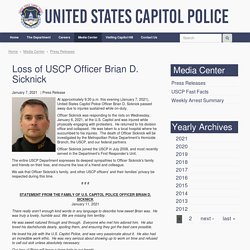 Sicknick passed away due to injuries sustained while on-duty. Officer Sicknick was responding to the riots on Wednesday, January 6, 2021, at the U.S. 1/11/21: Coons mourns the loss of USCP Officer Howard Liebengood. Spaceplay / pause qunload | stop ffullscreen shift + ←→slower / faster ←→seek . seek to previous 12… 6 seek to 10%, 20% … 60% DELAWARE – It’s not often that someone makes an impact on almost every person they come in contact with, but with Capitol Police Office Howard Liebengood, it seems he left a positive mark on everyone he met. 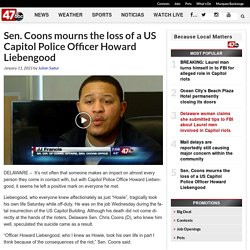 Liebengood, who everyone knew affectionately as just “Howie”, tragically took his own life Saturday while off-duty. “Officer Howard Liebengood, who I knew as Howie, took his own life in part I think because of the consequences of the riot,” Sen. 1/15/21: Rosanne Boyland Was Trampled in Capitol Stampede. Rosanne Boyland, a 34-year-old Trump supporter from Georgia who died during the attack on the Capitol on Jan. 6, appears to have been killed in a crush of fellow rioters during their attempt to fight through a police line, according to videos reviewed by The Times. 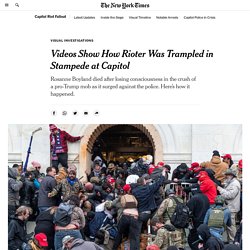 Though the videos have circulated widely, Ms. Boyland’s presence in them had gone unnoticed until now, and the manner of her death had previously been unclear. The videos show her body on the ground just outside a door on the Capitol’s west side that was the scene of some of the day’s worst violence. Her clothes and backpack strap in the videos match those she was seen wearing in a picture of her taken earlier that day, and two witnesses, one of whom tried to help her, gave similar accounts of her death. Here is how the fatal rush unfolded. 1/5/21: Pro-Trump “stop the steal” protests get off to bleak start. President Donald Trump is still refusing to concede the 2020 election to President-elect Joe Biden — and his most fervent supporters are on the same page. 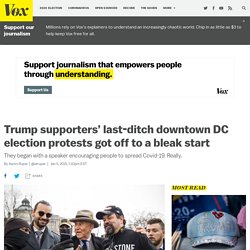 As part of Trump’s last-ditch effort to overturn Biden’s victory, he and his supporters (in and out of Congress) have been hyping Congress’s expected certification of Biden’s Electoral College victory Wednesday as the final opportunity to “stop the steal.” Trump fans planned a slate of protests near the Capitol building in Washington, DC, starting with rallies on Tuesday. Yet another will take place on Wednesday, at which Trump himself says he will speak. And they’re not off to a great start. Trump fans began gathering on Tuesday in Freedom Plaza and outside the Capitol, where recently pardoned Trump ally Roger Stone spoke.

“It’s a mass-spreader event!” "I'm going to give everyone three action steps ... turn to the person next to you and give them a hug. And another speech Tuesday evening featured a “victory or death!” 1/16/21: Inside the U.S. Capitol at the height of the siege. 1/12/21: Timeline of Events - How the Capitol Insurrection Happened. When President Trump railed against the election results from a stage near the White House on Wednesday, his loyalists were already gathering at the Capitol. 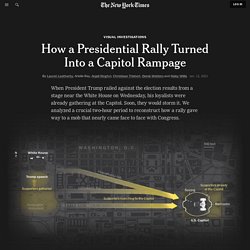 1/12/21: Rep Mondaire Jones describes being in the Capitol on January 6th. 1/7/21: Hate Symbols Left Behind at the U.S. Capitol. 1/8/21: What we saw the day the Capitol was attacked. 1/9/21: Black Capitol Police Officers Describe Fighting Off "Racist Ass Terrorists" The first glimpse of the deadly tragedy that was about to unfold came at 9 a.m. on the morning of the insurrection for one Black veteran of the US Capitol Police. 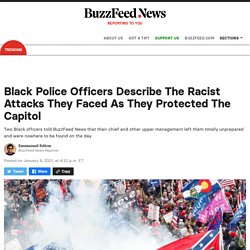 But it didn’t come from his superiors — instead the officer had to rely on a screenshot from Instagram sent to him by a friend. “I found out what they were planning when a friend of mine screenshot me an Instagram story from the Proud Boys saying, ‘We’re breaching the Capitol today, guys. I hope y’all ready.’” The officer, who asked to remain anonymous out of fear of retaliation from his superiors, told BuzzFeed News that it was just a sign of the chaos that was to come, which saw officers regularly finding themselves unprepared and then outmanned and overpowered by the mob.

Management’s inaction left Black police officers especially vulnerable to a mob that had been whipped up by President Donald Trump, a man who has a record of inspiring racist vigilantes to action. “Congress can bring anybody in the building that they want. 1/17/21: 41 minutes of fear:- A timeline from inside the Capitol siege. /13/21: Former NYPD detective examines Capitol Police officer Eugene Goodman’s actions to divert rioters. 1/7/21: After mob attacks Capitol, here's how Trump supporters view what happened. 1/7/21: Terrified President Throws His Riot Mob Under A Bus To Save His Neck (& Get Back On Twitter) 1/6/21: How Newsmax Covered the Insurrection It Provoked. Around 2 p.m. on Wednesday afternoon, as a horde of violent, paranoid morons, inflamed by fictitious tales of electoral malfeasance and goaded into action by a nihilistic president, stormed the U.S. 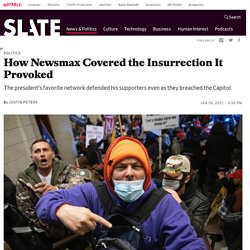 Capitol, a Touro College professor named Thane Rosenbaum went on Newsmax TV to praise the crowd for its forbearance. “I think today is a demonstration of the vibrancy of our democracy. You’ve got tens of thousands of people standing outside of the Capitol, exercising their First Amendment rights of freedom of association and freedom of speech,” said Rosenbaum, who in his royal-blue blazer and eyeglasses looked a bit like an emissary from Mr. Magorium’s Wonder Emporium. “I think that’s sort of a romantic idea.” If you believe that there’s a certain romance in anti-democratic death-cultism, then, sure, I guess romance was in the air on Capitol Hill this afternoon.

A daily email update of the stories you need to read right now. I spent Wednesday afternoon watching Newsmax TV’s coverage. Join. 1/7/21: "Not Only Did He Incite It, He Didn't Do Anything To Stop It" -Sen. Klobuchar On T****'s Failed Coup. 1/8/21: Tensions Rise in the House During Post-Riot Debate. 1/7/21: Two Americas– Trump Riots and Georgia Runoffs. 1/9/21: “We Learned Nothing New About Donald Trump This Week”

1/21/21: Nearly 1 In 5 Defendants In Capitol Riot Cases Served In The Military. 1/19/21: Unpacking the Capitol Riot & Four Years of Trump’s Bulls**t. 1/16/21: American Reckoning – PBS NewsHour Special Report. 1/15/21: Among the Insurrectionists at the Capitol. As Republican officials scrambled to prove their fealty to the President, some joined Gohmert in invoking the possibility of violent rebellion. In December, the Arizona Republican Party reposted a tweet from Ali Alexander, a chief organizer of the Stop the Steal movement, that stated, “I am willing to give my life for this fight.” The Twitter account of the Republican National Committee appended the following comment to the retweet: “He is. Are you?” Alexander is a convicted felon, having pleaded guilty to property theft in 2007 and credit-card abuse in 2008.

In November, he appeared on the “InfoWars” panel with Jones and Fuentes, during which he alluded to the belief that the New World Order would forcibly implant people with digital-tracking microchips. Jones, Fuentes, and Alexander were not seen rushing the gates when lives were lost at the Capitol on January 6th. Trump was lying when, after dispatching his followers to the Capitol, he assured them, “I’ll be with you.” 1/11/21: Yes, It Was a Coup Attempt. Here’s Why. Technically, what Trump attempted is what’s known as a “self-coup” and Trump isn’t the first leader to try it. Charles Louis Napoleon Bonaparte (nephew of the first Napoleon) pulled one off in France in December 1851 to stay in power beyond his term. Then he declared himself Emperor, Napoleon III. More recently, Nicolas Maduro perpetrated a self-coup in Venezuela after losing the 2017 elections. 1/12/21: In Memoriam -The Real Victims of The Insurrection were GOP (jest) 1/8/21: Storming the US Capitol Was about Maintaining White Power in America.

On Wednesday, after weeks of refusing to accept the outcome of the election, President Trump’s supporters stormed the Capitol of the United States as members of Congress were meeting to carry out their duties to certify the election results and confirm Joe Biden’s victory. Much will be said about the fact that these actions threaten the core of our democracy and undermine the rule of law. Commentators and political observers will rightly note that these actions are the result of disinformation and heightened political polarization in the United States.

And there will be no shortage of debate and discussion about the role Trump played in giving rise to this kind of extreme behavior. As we have these discussions, however, we must take care to appreciate that this is not just about folks being angry about the outcome of one election.