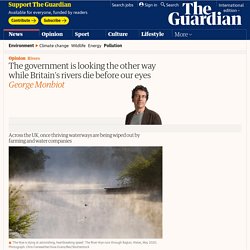 Pollution is the physical expression of corruption. So what should we conclude about a country whose rivers are systematically exploited, dumped on and bled dry? I’m writing from the Welsh borders, where I’m supposed to be on holiday. It’s among the most beautiful regions of Britain, but the rivers here are dying before my eyes. When I last saw it, four years ago, the Monnow, a lovely tributary of the River Wye, had a mostly clean, stony bed. A few days ago, part of another tributary of the Wye, the Llynfi, was wiped out by a pollution surge, for the third time in five years. The Wye itself is dying at astonishing, heartbreaking speed. Similar disasters are happening across Britain. Critics argue that the water companies blatantly abuse the “exceptional circumstances” rule, which allows them to discharge raw sewage into our rivers during extreme storms and floods.

Did you know that about 10% of the world's total supply of chalk streams fall within @AffinityWater's operational area.…

Guess what I’ve been doing this morning and with whom? :)… Q: "Do why not declare a drought?" A: "It is a drought"... □□‍♂️ As you sleep tonight think to the future. #ChalkStreamsInCrisis… @VerValleySoc @Feargal_Sharkey pleased to be able to join you this morning at the #protestinthepark Fantastic turnout! @FriendsRib… Plunder of the Commons by Guy Standing review – how to take back our shared wealth.

Last year, I accompanied the former Undertones singer Feargal Sharkey as he walked along the River Lea, one of England’s many chalk streams. 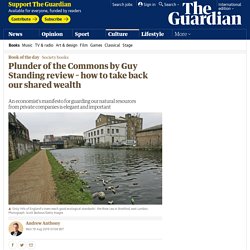 He told me about the deliberate neglect, commercial exploitation and pollution of these natural resources and painted a picture of a joint bureaucratic-corporate carve-up and then cover-up that has resulted in only 14% of England’s rivers reaching good ecological standards. How that situation came to be is a story in one sense of private commercial interests seeking profit from public need. What’s often negated in that process is the longstanding relationship between personal use and public responsibility. After all, how many of us think about the communal impact of flushing the loo and allowing the tap to run while we brush our teeth? We are a country with an abundant water supply that nonetheless suffers flooding, shortages and recurring flouting of regulations, while private water companies walk off with massive dividends.

Alison Archer sur Twitter : "And there's even a cameo by the wonderful AJ McConville from @Thames21 talking about #wetwipes, watch this great newspiece on #rivers, #sewage, how we treat our greatest, most beautiful + most critical natural assets #riversar. “We decry other countries for the way they treat their environment... But here we are destroying every single chalk stream. How hypocritical can you get?” @Feargal_Sharkey launches a ferocious attack on the government, regulators and water suppliers over.

Channel 5 News sur Twitter : "“We decry other countries for the way they treat their environment... But here we are destroying every single chalk stream. How hypocritical can you get?” @Feargal_Sharkey launches a ferocious attack on the government, regula. Thank you so much once again to @helenmulroy and everyone at @BBCLookEast for your time. Hugely appreciated. Our chalk streams will thank you for it. *****BBC Look East: Helen Mulroy meets Feargal Sharkey. Feargal Sharkey sur Twitter : "That blue pipe is now the source of the Hogsmill River one of only 200 chalk streams in the entire world. Yep such is the impact of abstraction the local water company is now having to pipe water into the river. Here's my Ra.

I think I might have to go for a lie down after that.… *****Reading this by Fred Pearce & these paragraphs are brilliant 'Can my England... really sit back while it destroys its own "rainforest"?' #chalkstreams @Feargal_Sharkey @EnvAgency… *****Map of chalksteams: So few, so precious #chalkstreams… So how’s that regulation thing working out? These are our chalk streams this is what we do to them. Time for change. Time to put the river back into our rivers.… Feargal Sharkey sur Twitter : "If you haven't read this thread you really need to. Great background how Southern Water staff obstructed, mislead and polluted our rivers. Yet not a single penny from Ofwat's fine pays for the envorinemntal damage caused by. Less stringent environmental objectives may be set on the basis of appropriate, evident and transparent criteria, and all practicable steps should be taken to prevent any further deterioration of the status of waters.”

Goodbye #RiverVer brown trout. They need a #chalkstream not a slimy puddle to live in. Without water there is no life. Even the crayfish can't take it.… Feargal Sharkey sur Twitter : "Why we need a hosepipe ban. In the foreground is the River Mimram, a chalk stream in Herts, due to over abstraction & drought it is currently running at just 53% of flows. The background, the £150 p/n @tewinburyfarm hotel, w.