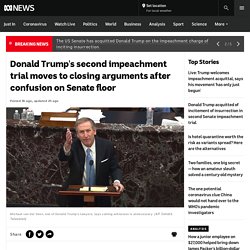 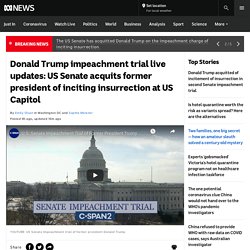 On that point, everyone agrees. But he says there's been no evidence presented or videos shown during the trial indicating it was Trump inciting his supporters to insurrection or urging them to acts of violence. In fact, he seems to pin the incitement instead on "political leaders and media personalities" glorifying civil unrest — in what seems to be a reference to the Black Lives Matter protests last year. 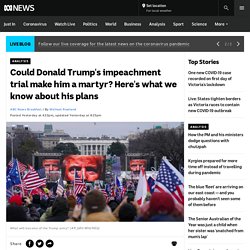 The 100 senators who will decide the former president's fate are the closest of observers. 'Democracy has prevailed': front pages across world hail Joe Biden's inauguration. Joe Biden’s declaration in his inauguration speech that democracy was the real winner of the presidential election has been used by many newspapers to mark his accession to the Oval Office. 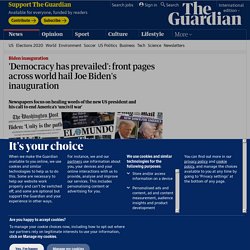 Along with several other titles, the Guardian employs a poster front page featuring a picture of the president making his speech on the steps of the Capitol alongside the headline: “Democracy has prevailed”. The New York Times chooses the same message with the headline “‘Democracy has prevailed’: Biden vows to mend nation” above a full-width picture of Biden and his wife Jill embracing. The normally typographically conservative Financial Times also goes with a huge picture of Biden and the same headline again: “democracy has prevailed”. Lady Gaga, an absent Donald Trump and troops on the ground: Get ready for an unusual presidential inauguration. When Joe Biden and Kamala Harris are sworn in on January 20, the event will be unlike any other that has come before. 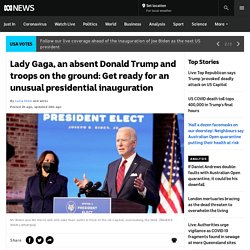 With a raging pandemic already expected to disrupt plans, threats of more violence after the storming of the Capitol Building on January 6 have further derailed the schedule. What we know is that the event itself will be scaled back but US media has been reporting that some decisions may come down to the final hours and minutes. The pictures of large crowds and first dances from the President and First Lady at the inaugural ball will be missing. Yet, some traditions — like the typical hand on a bible moment followed by an inaugural speech — will be upheld. 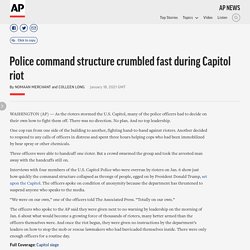 Capitol, many of the police officers had to decide on their own how to fight them off. There was no direction. No plan. And no top leadership. One cop ran from one side of the building to another, fighting hand-to-hand against rioters. Three officers were able to handcuff one rioter. Capitol riots: Hundreds will be charged over violence - FBI. Trump’s speech that ‘incited’ Capitol violence: Full transcript. Donald Trump is facing the imminent prospect of becoming the first US president to be impeached twice following an extraordinary breach of the country’s Capitol in Washington, DC, by his supporters. 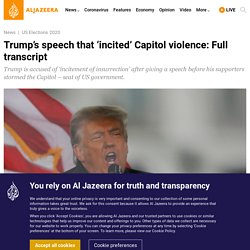 Democrats led by Speaker Nancy Pelosi are pressuring Vice President Mike Pence to invoke the 25th Amendment to strip Trump of his power by declaring him unable to fulfil his duties. If Pence refuses, as expected, the group will move forward bringing the impeachment case to the floor as soon as Monday. Trump is accused of “incitement of insurrection” after giving an incendiary speech on January 6 in Washington DC before a mob violently attacked the heart of the US government. At least five people were killed in the assault. Schwarzenegger rebukes Trump and compares Capitol riot to Kristallnacht. Arnold Schwarzenegger issued a stinging rebuke of Donald Trump on Sunday, comparing the riot at the US Capitol which the president incited to Kristallnacht, the night in November 1938 when Nazi thugs attacked Jewish Germans and their property, a harbinger of horrors to come. 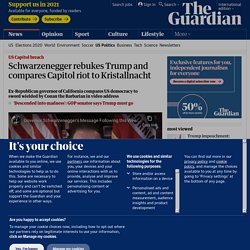 He also compared American democracy to a weapon he wielded onscreen in the loincloth of Conan the Barbarian nearly 40 years ago, saying: “Our democracy is like the steel of this sword. As it happened: Democrats plan to introduce Trump impeachment articles on Monday. US Capitol attack: Trump impeachment looms as Republican support wavers.

US Capitol attack: Trump impeachment looms as Republican support wavers. Trump vs Biden: US drama has global consequences. It is often said that one leads by example. 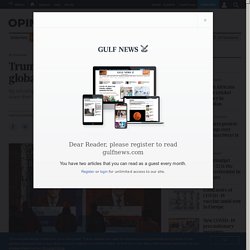 The United States, as a global power, led by example for decades. Its democratic process has always been an example to others with a system that runs like a clock work. This has been the case for at least two centuries. A perplexed world has been watching an interesting, but yet an awkward political melodrama developing in the US for the past five days, in which the two presidential candidates are claiming victory. And the perceived loser refuses to concede, threatening a prolonged stalemate that has never been seen in American history. It is rare for Americans to wait more than a day to know the winner of the polls but there were some historical instances of contested results. This time around however it is a whole different situation.

Faces of extremism: the rioters behind the attack on the US Capitol. The FBI has appealed for people to help identify the Capitol rioters on Thursday, as some of the more prominent members of the pro-Trump mob began to be named online. 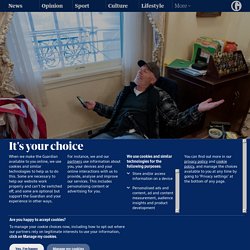 They include Jake Angeli, whose horned hat and furs drew the eye of many watching at home, and Richard Barnett, who was photographed sitting at Nancy Pelosi’s desk as a mob of Trump supporters besieged the Capitol building. A total of 68 people were arrested on Wednesday, according to DC police, and just one of those was local to the area – a detail that reveals the mass of people who descended on DC for the protest. Siege of US Capitol by pro-Trump mob forces hard questions.

WASHINGTON (AP) — One day later, the violent siege of the U.S. Capitol by President Donald Trump’s supporters forced painful new questions across government — about his fitness to remain in office for two more weeks, the ability of the police to secure the complex and the future of the Republican Party in a post-Trump era. In the immediate aftermath, the attack on the world’s iconic dome of democracy, shocking imagery flashed around the globe, reinforced lawmakers’ resolve to stay up all night to finish counting the Electoral College vote confirming Democrat Joe Biden won the presidential election.

But the rampage that left four dead and a country on edge is forcing a broader reckoning of all that has happened over Trump’s tenure in office and what comes next for a tattered and torn nation. House Speaker Nancy Pelosi said that any remaining day with the president in power could be “a horror show for America.” EXPLAINER: Transfer of power under 25th Amendment. WASHINGTON (AP) — President Donald Trump’s role in inciting violence at the Capitol and his long refusal to acknowledge his election defeat is prompting some lawmakers to urge his removal from office through the 25th Amendment.

Prosecutor: Sedition charges possible for mob. WASHINGTON (AP) — The Latest on the fallout of the storming of the Capitol by a mob of pro-Trump loyalists (all times local): 4 p.m. The top federal prosecutor for the District of Columbia says “all options are on the table” for charges against the violent mob that stormed the U.S. Capitol, including sedition. Michael Sherwin, acting U.S. attorney for D.C., says prosecutors plan to file 15 federal cases on Thursday for crimes including unauthorized access and theft of property, and investigators are combing through scores of evidence to bring additional charges.

He says 40 other cases had already been charged in a District of Columbia superior court. The announcement comes a day after angry and armed protesters broke into the U.S. Police say more than 90 people were arrested on Wednesday and Thursday morning. How a Donald Trump rally transformed Washington DC and Capitol Hill into a riot zone. On the day the US election results were to be certified by Congress, Donald Trump supporters forced their way into the Capitol building. Four people died on the Capitol grounds and 52 people were arrested by the evening. The rioters breached a threshold that had not been crossed in more than 200 years and disrupted the American democratic process.

In a statement on Saturday, the senators called for an electoral commission with investigatory power to be created to carry out an “emergency 10-day audit” of US presidential election results in “disputed states”. “Accordingly, we intend to vote on January 6 to reject the electors from disputed states … unless and until that emergency 10-day audit is completed,” the senators said, without specifying which states they were referring to. Trump urges Georgia official to overturn vote in leaked call. US Senate leader Mitch McConnell acknowledges Joe Biden as President-elect - ABC News. Senate Majority Leader Mitch McConnell congratulated Democrat Joe Biden as President-elect on Tuesday (local time), saying the Electoral College "has spoken". If the US electoral college system was like ordering a pizza, here's how it would work - ABC News.

Trump helicopter buzzes supporters rallying in Washington. Supreme Court rejects Republican attack on Biden victory. WASHINGTON (AP) — The Supreme Court on Friday rejected a lawsuit backed by President Donald Trump to overturn Joe Biden’s election victory, ending a desperate attempt to get legal issues rejected by state and federal judges before the nation’s highest court and subvert the will of voters. US Supreme Court rejects Trump-backed bid to overturn election. Donald Trump fires agency boss, Chris Krebs, who vouched for 2020 vote security - ABC News. Donald Trump's current strategy isn't about winning in court. It's about disrupting the process in the hope of winning the US election by default - ABC News.

'Trump isn't going to protect us': Obama returns to campaign trail for Biden. Is Donald Trump going to win the election? A Joe Biden wildcard is about to enter the race - ABC News. The Trump Era Sucks and Needs to Be Over - Reporting by Matt Taibbi. Coronavirus, riots and, now, division over Trump's Juneteenth rally: How much more can America take? - ABC News. Donald Trump pivots from coronavirus denial to law and order in a bid to catch Joe Biden in the polls - ABC News. The Lincoln Project is a group of rogue Republicans trying to troll Donald Trump out of office - ABC News.

Presidential debate: Who won the Trump-Biden clash? Donald Trump plunges debate into chaos as he repeatedly talks over Joe Biden. The United States is deeply divided, but what we have seen this week is democracy in action - ABC News. Has Biden won? Has Trump conceded? Here's what the Pennsylvania result means for the US presidential election - ABC News. Donald Trump's US election endgame has been in plain sight for months. Kamala Harris is the first woman set to become Vice-President of the United States - ABC News. The media faces a serious dilemma after US networks cut away from a Donald Trump press conference full of baseless claims of election fraud - ABC News.