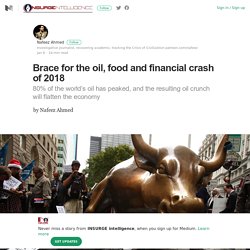 Unfortunately, the true implications of the HSBC report were largely misunderstood. The HSBC research note — prepared for clients of the global bank — found that contrary to concerns about too much oil supply and insufficient demand, the situation was opposite: global oil supply will in coming years be insufficient to sustain rising demand. Lasers, Biotech & Global Instability. WASHINGTON — The US military of 2035 will have to deal with the breakdown of global norms, the proliferation of dangerous technologies via the commercial sector, and hypersonic weaponry, according to a recent document issued by the Joint Chiefs of Staff. 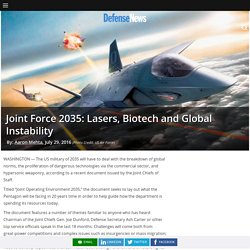 Titled “Joint Operating Environment 2035,” the document seeks to lay out what the Pentagon will be facing in 20 years time in order to help guide how the department is spending its resources today. The document features a number of themes familiar to anyone who has heard Chairman of the Joint Chiefs Gen. Joe Dunford, Defense Secretary Ash Carter or other top service officials speak in the last 18 months: Challenges will come both from great-power competitions and complex issues such as insurgencies or mass migration; the spread of technology means the US military dominance is not assured; and the need to develop capabilities that can match both the high and low end of future fights.

What US technologies should be in play by 2035? Club of Rome's Date for Civilisation's End. In 1973, a computer program was developed at MIT to model global sustainability. 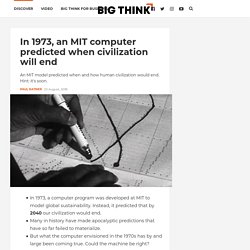 Instead, it predicted that by 2040 our civilization would end. Many in history have made apocalyptic predictions that have so far failed to materialize.But what the computer envisioned in the 1970s has by and large been coming true. Could the machine be right? 200m Climate Migrants. Imagine a world with as many as one billion people facing harsh climate change impacts resulting in devastating droughts and/or floods, extreme weather, destruction of natural resources, in particular lands, soils and water, and the consequence of severe livelihoods conditions, famine and starvation. 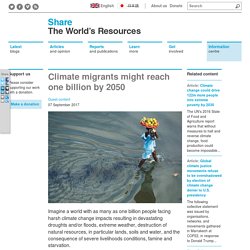 Although not yet based on definite scientific projections, the proven speed with which the process of climate change has been taking place, might lead to such a scenario by 2050. If so, 1 in 9 human beings would be on the move by then. Currently, forecasts vary from 25 million to 1 billion environmental migrants by 2050, moving either within their countries or across borders, on a permanent or temporary basis, with 200 million being the most widely cited estimate, according to a 2015 study carried out by the Institute for Environment and Human Security of the United Nations University. “This figure equals the current estimate of international migrants worldwide.” 140m People Moving Within Their Countries’ Borders. Climate migrants: the human face of climate change The report looks closely at three country examples: Ethiopia, Bangladesh and Mexico, all countries with very different climatic, livelihood, demographic, migration and development patterns.

It is worth taking a moment to remember that behind all trends there are real people with dreams, hopes, and aspirations. We met three people whose lives have been transformed in different ways as they have dealt with the impacts of climate change. Watch Monoara's story Monoara Khatun is a 23-year-old seamstress from Kurigram, Bangladesh. “Floods come every year, but this year the situation is worse,” says Monoara. According to the report’s “pessimistic” scenario, South Asia is projected to have 40 million internal climate migrants by 2050, with Bangladesh contributing a third of that number. Watch Wolde's story Wolde Danse, a 28-year-old from Ethiopia, is also turning adversity into a chance to change the course of his life. 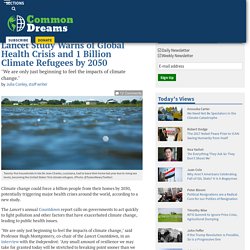 The Lancet's annual Countdown report calls on governments to act quickly to fight pollution and other factors that have exacerbated climate change, leading to public health issues. "We are only just beginning to feel the impacts of climate change," said Professor Hugh Montgomery, co-chair of the Lancet Countdown, in an interview with the Independent. "Any small amount of resilience we may take for granted today will be stretched to breaking point sooner than we may imagine. The report found that "migration driven by climate change has potentially severe impacts on mental and physical health, both directly and by disrupting essential health and social services.

" 1 in 5 People Climate Migrants. In the year 2100, 2 billion people—about one-fifth of the world’s population—could become refugees due to rising ocean levels. 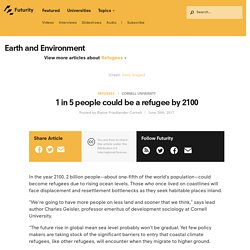 Those who once lived on coastlines will face displacement and resettlement bottlenecks as they seek habitable places inland. “We’re going to have more people on less land and sooner that we think,” says lead author Charles Geisler, professor emeritus of development sociology at Cornell University. “The future rise in global mean sea level probably won’t be gradual. Yet few policy makers are taking stock of the significant barriers to entry that coastal climate refugees, like other refugees, will encounter when they migrate to higher ground. Earth’s escalating population is expected to top 9 billion people by 2050 and climb to 11 billion people by 2100, according to a United Nations report.