Bitcoin & Blockchain. Blockchain And The Future Of Finance. Cognizant’s Tony Virdi tells us why it is backing the new alternative to cash Large financial transactions have been virtual for a long time, moving around the world via banking and corporate systems and often tallied up in spreadsheets. 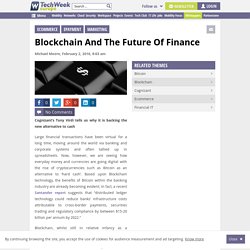 Now, however, we are seeing how everyday money and currencies are going digital with the rise of cryptocurrencies such as Bitcoin as an alternative to ‘hard cash’. Based upon Blockchain technology, the benefits of Bitcoin within the banking industry are already becoming evident; in fact, a recent Santander report suggests that “distributed ledger technology could reduce banks’ infrastructure costs attributable to cross-border payments, securities trading and regulatory compliance by between $15-20 billion per annum by 2022.” What can blockchain be used for, other than Bitcoin? This article is published in collaboration with The Conversation. 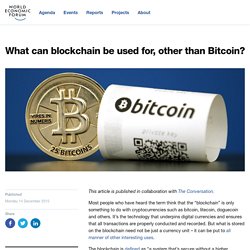 Most people who have heard the term think that the “blockchain” is only something to do with cryptocurrencies such as bitcoin, litecoin, doguecoin and others. It’s the technology that underpins digital currencies and ensures that all transactions are properly conducted and recorded. But what is stored on the blockchain need not be just a currency unit – it can be put to all manner of other interesting uses. The blockchain is defined as “a system that’s secure without a higher authority, distributed across many strangers’ computers, yet tamper-proof, and promises a mechanism for trust mediated directly between individuals”.

Essentially, by providing a distributed means to guarantee and verify transactions, the blockchain offers the ultimate opportunity to cut out the middleman. The future of cryptocurrencies: Bitcoin and beyond. Chris Ryan/Nature When the digital currency Bitcoin came to life in January 2009, it was noticed by almost no one apart from the handful of programmers who followed cryptography discussion groups. 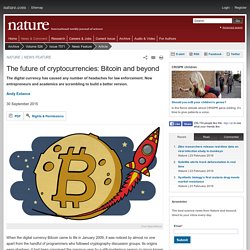 Its origins were shadowy: it had been conceived the previous year by a still-mysterious person or group known only by the alias Satoshi Nakamoto1. And its purpose seemed quixotic: Bitcoin was to be a 'cryptocurrency', in which strong encryption algorithms were exploited in a new way to secure transactions. Users' identities would be shielded by pseudonyms. Records would be completely decentralized. Yet the idea caught on. Noah Baker investigates what the future may hold for digital currencies. Why the search for Bitcoin's founder matters.

(Image: Jonathan Alcorn/Bloomberg via Getty Images) Update, 9 December 2015: Documents leaked to Gizmodo and Wired seem to point to a new identity for Satoshi Nakamoto; Craig Wright, a cryptographer and software developer from Australia. 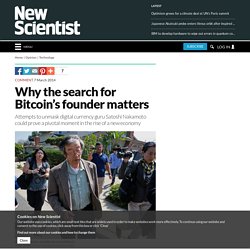 Money or property? The answer has big implications for bitcoin. A judge in Florida ruled in a money-laundering case this week that bitcoin is not a currency — but experts aren't so sure. 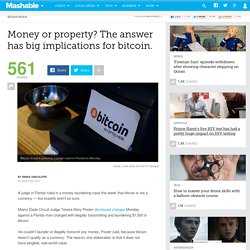 Miami-Dade Circuit Judge Teresa Mary Pooler dismissed charges Monday against a Florida man charged with illegally transmitting and laundering $1,500 in bitcoin. He couldn't launder or illegally transmit any money, Pooler said, because bitcoin doesn't qualify as a currency. The reason, she elaborated, is that it does not have tangible, real-world value. Instead, bitcoin is property, the ruling said. The electronic currency was created in 2009 and has grown exponentially in popularity since then. Bitcoin eventually found some popularity for legitimate online transactions and its value surged at a few points in 2015. As the currency has become more widely used, courts and citizens have been confronting difficult legal questions around just what a bitcoin is.

A new approach to consensus: Swirlds Hashgraph. As many people know, my interest in consensus mechanisms runs far and wide. 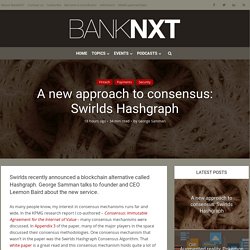 In the KPMG research report I co-authored – Consensus: Immutable Agreement for the Internet of Value – many consensus mechanisms were discussed. In Appendix 3 of the paper, many of the major players in the space discussed their consensus methodologies. One consensus mechanism that wasn’t in the paper was the Swirlds Hashgraph Consensus Algorithm. Blockchain Is Helping Us Feed the World's Hungriest Families.

A Different Way to Help Blockchain is making headlines everywhere — from the trading markets to even the arena of universal basic income. 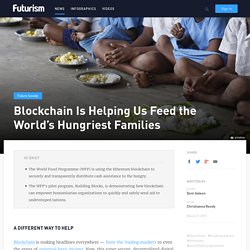 Now, this super secure, decentralized digital network can also help feed the world. In a project using the Ethereum blockchain, the World Food Programme (WFP) is changing its approach to feeding the hungry. Instead of just giving food, the WFP has opened up a cash assistance program Building Blocks. Bitcoin Heist: $72 Million Worth of Bitcoin Stolen from Hong Kong Exchange. In Brief This is second major theft in the history of a bitcoin exchange. 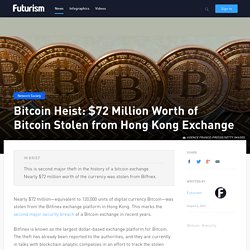 Nearly $72 million worth of the currency was stolen from Biffnex. Nearly $72 million—equivalent to 120,000 units of digital currency Bitcoin—was stolen from the Bitfinex exchange platform in Hong Kong. This marks the second major security breach of a Bitcoin exchange in recent years. Bitfinex is known as the largest dollar-based exchange platform for Bitcoin. Director of Community and Product Development for Bitfinex, Zane Tackett has told the press that the company has yet to decide how they will address the losses customers have incurred due to this breach. The Future of Work. Blockchain May Hold the Key to a Governance Crisis. This article was originally published by International Business Times. 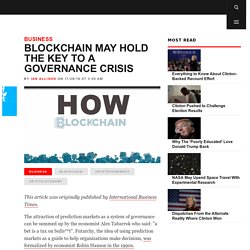 The attraction of prediction markets as a system of governance can be summed up by the economist Alex Tabarrok who said: "a bet is a tax on bulls**t". Futarchy, the idea of using prediction markets as a guide to help organizations make decisions, was formalized by economist Robin Hanson in the 1990s. The way Futarchy works is when an organization sets out some objective it is trying to maximize, and then allows people to economically back the choices they believe will achieve that goal.

If a decision between X and Y needs to be made, tokens for X and Y are issued and a market for each token is created. Whichever market shows the higher price, that will dictate the decision to be taken, and on the winning market holders of the token are later paid out based on how well the organization ends up achieving its objective. Try Newsweek for only $1.25 per week. Still Don't Get Bitcoin? Here's an Explanation For Five-Year-Olds. Equifax Hackers Demand Ransom in Bitcoin - Foundation for Economic Education - Working for a free and prosperous world.

Equifax Hackers Demand Ransom in Bitcoin - Foundation for Economic Education - Working for a free and prosperous world. Can Basic Income Plus The Blockchain Build A New Econom. This story reflects the views of this author, but not necessarily the editorial position of Fast Company. 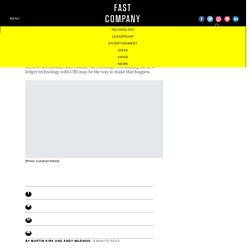 You may not have noticed, but a huge global movement is well on its way to creating the next generation of the internet. The truth about bitcoin. It’s been an interesting few weeks, watching bitcoin’s rollercoaster ride as it rises to valuations over $4,000 and then dives to almost $2,000 before rising again to near $6,000. Cryptocurrencies are Dead – The World of Deep Wealth – Medium. (They just don’t know it yet.) I believe the crux of the issue confronting current implementations of cryptocurrencies is that you can’t govern something that doesn’t exist. The truth of that last statement is probably obvious, so let me clarify the connection to cryptocurrencies.

Blockchain Just Became Obsolete. The Future is Hashgraph. What makes DBS different? - Chris Skinner's blog. I just had a whirlwind visit to Indonesia to support DBS in the rollout of their digibank service there. It was a very short visit, but a packed evening of presentations and discussions. Part of the time was spent with Piyush Gupta, the CEO, who I’ve been watching for some time now. Piyush has surrounded himself with a team of game changers who all joined the bank in late 2008 and embarked on a business transformation process from 2009 onwards.

I’m betting that most of you will be aware of or familiar with DBS but, just in case, here’s the low-down: Formed by the Singapore government in 1968 as the Development Bank of SingaporeOffices in China, Dubai, Hong Kong, India, Indonesia, Japan, South Korea, Malaysia, Myanmar, Philippines, Taiwan, Thailand, Vietnam, United Kingdom and United StatesRevenues of US$10.28 billion (2016)Net income of US$3.07 billion (2016)Total assets US$333.48 billion (2016)22,194 employees36 branches in Singapore. MoneyClassification. Why I Quit Ordering From Uber-for-Food Start-Ups - The Atlantic. I work some days from a small office in San Francisco, and every day, I gotta eat. For a stretch of several weeks this year, I obtained my lunch from an iPhone app called Sprig. It’s a beautiful piece of software. A trompe l’oeil table offers a compact slate of choices for lunch and dinner, all photographed beautifully from above. The truth about Ant Financial ... - Chris Skinner's blog.

I finally finished writing my new book. Don’t Be Scared About The End Of Capitalism—Be Excited. This story reflects the views of these authors, but not necessarily the editorial position of Fast Company. Basic income isn’t just a nice idea. It's a birthright. Every student learns about Magna Carta, the ancient scroll that enshrined the rights of barons against the arbitrary authority of England’s monarchs.