Scientists Debut Low-Cost System for Splitting Carbon Dioxide Into Usable Fuel - Motherboard. The world’s first commercial CO2 capture plant just went live. A Swiss company on Wednesday is set to become the world’s first to commercially remove carbon dioxide directly from the atmosphere and turn it into a useful product. 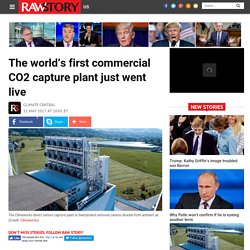 Climeworks, which will begin operations at a facility near Zurich, Switzerland, plans to compress the CO2 it captures and use it as fertilizer to grow crops in greenhouses. The company wants to dramatically scale its technology over the next decade, and its long-term goal is to capture 1 percent of global annual carbon dioxide emissions by 2025.

Along with cutting fossil fuel use to zero, removing carbon dioxide from the air is increasingly seen as one way to stop the long-term buildup of greenhouse gases in the atmosphere. Carbon removal and storage coupled with drawing down fossil fuel use is called “negative emissions.” Time is running out to perfect the various methods of capturing carbon dioxide and permanently storing it. This article was originally published at Climate Central. Artificial Photosynthesis Advance Hailed As Major Breakthrough. In what's being called a win-win for the environment and the production of renewable energy, researchers at Lawrence Berkeley National Laboratory and the University of California, Berkeley, have achieved a major breakthrough in artificial photosynthesis. 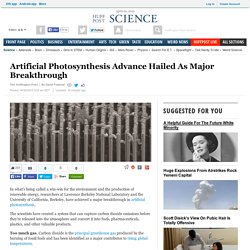 The scientists have created a system that can capture carbon dioxide emissions before they're released into the atmosphere and convert it into fuels, pharmaceuticals, plastics, and other valuable products. Too much gas. Carbon dioxide is the principal greenhouse gas produced by the burning of fossil fuels and has been identified as a major contributor to rising global temperatures. "Our system has the potential to fundamentally change the chemical and oil industry in that we can produce chemicals and fuels in a totally renewable way, rather than extracting them from deep below the ground," Dr. (Story continues below photo.) "The real issue comes from the balance of energy efficiency, cost, and stability, Dr. Japan space scientists make wireless energy breakthrough. Japanese scientists have succeeded in transmitting energy wirelessly, in a key step that could one day make solar power generation in space a possibility, an official said Thursday. 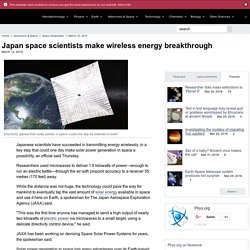 Researchers used microwaves to deliver 1.8 kilowatts of power—enough to run an electric kettle—through the air with pinpoint accuracy to a receiver 55 metres (170 feet) away. While the distance was not huge, the technology could pave the way for mankind to eventually tap the vast amount of solar energy available in space and use it here on Earth, a spokesman for The Japan Aerospace Exploration Agency (JAXA) said. With So Much Oil Flowing, U.S. May Be Reaching Storage Limits. Cushing, Okla., is a major oil storage site. 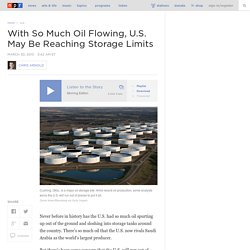 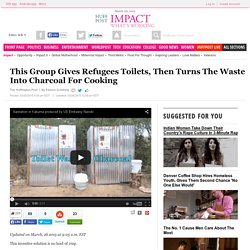 EST This inventive solution is no load of crap. Across the globe, 1.8 billion people use a drinking water source that is contaminated with fecal matter, according to the World Health Organization (WHO). To make sure the waste produced by refugees and low-income households in Kenya doesn’t infiltrate their water systems, a group founded by U.S. university grads is turning poop into charcoal for cooking. Established in 2011 based off of research conducted at Emory and Georgia Tech, Sanivation provides toilets to people in need, collects the waste and then treats it with solar energy. Sanivation co-founder Emily Woods said in a video interview that the briquettes are particularly “fantastic” because it burns longer than standard coal and emits less carbon monoxide and particulate emissions. 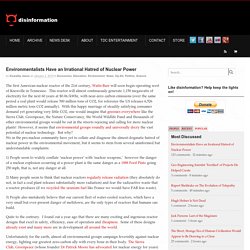 This reactor will almost continuously generate 1,150 megawatts of electricity for the next 60 years at $0.06/kWhr, with near-zero carbon emissions (over the same period a coal plant would release 500 million tons of CO2, for reference the US releases 6,526 million metric tons CO2 annually). With this happy marriage of steadily satisfying consumer demand yet generating very little CO2, one would imagine that greenies everywhere like the Sierra Club, Greenpeace, the Nature Conservancy, the World Wildlife Fund and thousands of other environmental groups would be out in the streets rejoicing and calling for more nuclear plants!

However, it seems that environmental groups roundly and universally decry the vast potential of nuclear technology. But why? Quite to the contrary. New technique offers spray-on solar power. Pretty soon, powering your tablet could be as simple as wrapping it in cling wrap. 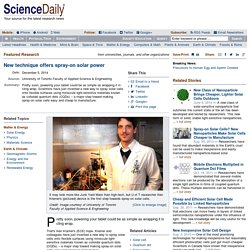 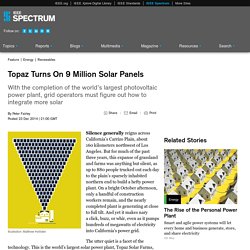 But for much of the past three years, this expanse of grassland and farms was anything but silent, as up to 880 people trucked out each day to the plain’s sparsely inhabited northern end to build a hefty power plant. On a bright October afternoon, only a handful of construction workers remain, and the nearly completed plant is generating at close to full tilt. Why Elon Musk's Batteries Scare the Hell Out of the Electric Company. Climate: Now or Never Here’s why something as basic as a battery both thrills and terrifies the U.S. utility industry. 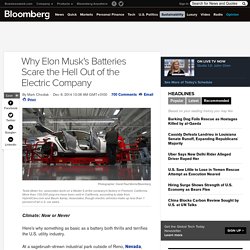 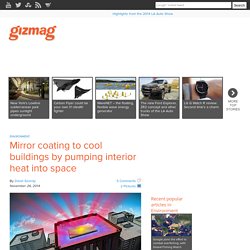 In fact, conventional air conditioning methods are very energy intensive and account for up to 15 percent of the energy used in buildings in the United States alone. However, engineers at Stanford University have come up with a new ultrathin, multilayered, nanophotonic material that not only reflects heat away from buildings, but also directs heat from inside out into space, cooling both the building and the planet as well.

Heat moves by one of three methods. It can be conducted, which is what happens when you touch a hot stove; it can be convected, which is why you get a blast of hot air in the face when you open an oven and forget to stand back; and it can radiate in the form of infrared rays, which is how you know an oven is hot before you touch it. Dubbed photonic radiative cooling by the researchers, the process relies on a coating made of a combination of silicon dioxide (SiO2) and hafnium oxide (HfO2) set on a thin layer of silver. WaveNET – the floating, flexible wave energy generator. Scotland's Albatern is putting a new, modular spin on renewable energy generation.

WaveNET is a scalable array of floating "Squid" generator units that harvest wave energy as their buoyant arms rise and fall with the motion of the waves. Each Squid can link up to as many as three others, effectively creating a large, floating grid that's flexible in every direction. The bigger this grid gets, the more efficient it becomes at harvesting energy, and the more different wave movements it can extract energy from. New tech could allow electric cars' body panels to store energy.

Imagine opening up an electric car and finding no batteries. An absent-minded factory worker or magic? Perhaps neither. Nanoparticle-based material turns up the heat on concentrated solar power. The key factor when it comes to solar power plant efficiency – be they of the photovoltaic or concentrated solar power (CSP) variety – is the amount of light that can be captured by the light-absorbing material and converted into electricity or heat. Researchers at the University of California, San Diego (UCSD) have developed a new nanoparticle-based material that promises to improve the efficiency of CSP plants with its ability to absorb and convert over 90 percent of the sunlight it captures into heat.

Unlike photovoltaic (PV)-based solar power plants, which convert light directly into electricity, CSP plants generally use sunlight, concentrated onto a small area, to generate heat and drive a steam turbine to generate electricity. Because this is similar to the process used by fossil fuel power plants, CSP technology has the potential to be retrofitted to existing power plants to make them more environmentally friendly. Source: UCSD. Germany's Revolution in Small Batch, Artisanal Energy. JEDDAH, Saudi Arabia — Ahmed al-Ghamdi's long, bushy beard and red-checked headscarf are emblems of his conservative approach to Islam, which is no surprise for a man who once supervised the Saudi religious police in the holy city of Mecca.

But it was something surprising about Ghamdi that brought me to his apartment in a scruffy, low-income section of Jeddah in the sweltering summer of 2011. I wanted to know why he had announced that, after extensive research, he could find no Islamic basis for Saudi society's most distinctive feature: its strict gender segregation. As his wife, sister, and mother listened in with obvious pride, Ghamdi explained that he could no longer take "at face value" religious rulings that gender mixing is haram -- that is, religiously prohibited.

Batteries included: A solar cell that stores its own power. Is it a solar cell? Or a rechargeable battery? Actually, the patent-pending device invented at The Ohio State University is both: the world's first solar battery. In the October 3, 2014 issue of the journal Nature Communications, the researchers report that they've succeeded in combining a battery and a solar cell into one hybrid device. Key to the innovation is a mesh solar panel, which allows air to enter the battery, and a special process for transferring electrons between the solar panel and the battery electrode. Boeing opens cooking-oil-to-biofuel plant in China. Turning seaweed to biofuel. Solar panels made three times cheaper and four times more efficient. Scientists create water splitter that runs on a single AAA battery. Boeing begins program to produce aviation biofuel from hybrid tobacco plants.

Inside a network operator: How solar changed the game. Top-class biofuel from the depths of the forest. Strawscraper concept calls for a wind energy-harvesting toupee. World's largest fat-burning power station to burn blubber from London sewers. Europe joins race to store energy at the bottom of the ocean. SKWID harnesses the power of both the wind and the tide. Artificial Photosynthesis System as efficient as plants and can reduce CO2 levels. What if we never run out of oil? Could New York run on renewable energy alone? Solar panels could destroy U.S. utilities, according to U.S. utilities. New gas plants about to be priced out of electricity market. EWICON bladeless wind turbine generates electricity using charged water droplets. Trees used to create recyclable, efficient solar cell.

Tapping the Motion of the Ocean: Could the Tides Power Our World? Super-efficient solar-energy technology: ‘Solar steam’ so effective it can make steam from icy cold water. Electricity from the marshes. A 'Green' Gold Rush? Calif. Firm Turns Trash To Gas. Hybrid nanomaterial converts light and heat into electricity. Alternative Fuels’ Long-Delayed Promise Might Be Near Fruition.