United Flies Passenger Flight Using 100% Sustainable Aviation Fuel. Passenger planes with electric powertrains may still be only a speck on the horizon, but the use of emissions-lowering biofuel just took a giant step towards viability. 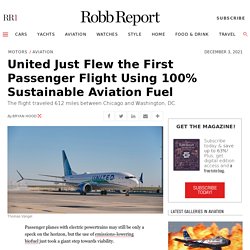 United Airlines made history on Wednesday when it operated the first passenger flight using 100 percent sustainable aviation fuel (SAF). The flight was the airline’s attempt to prove that there is no operational difference between SAF and the conventional fuel currently used by commercial planes. The plane used for Wednesday’s flight was one of United’s new Boeing 737 Max 8s.

More than 100 passengers, including the company’s CEO Scott Kirby, were on board the demonstration flight, which took off from Chicago’s O’Hare airport and landed at Washington, DC’s Reagan National Airport, according to the airline. Airplanes are currently only allowed to fly with a maximum of 50 percent SAF on board and it must be blended with conventional fuel. Quest recycled fabric by Camira. Dezeen Showroom: British textile brand Camira has launched Quest – a versatile fabric made of recycled plastic waste taken from the oceans. 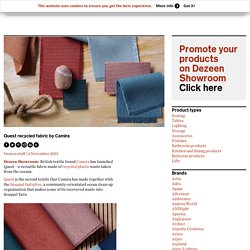 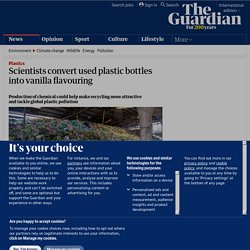 Upcycling plastic bottles into more lucrative materials could make the recycling process far more attractive and effective. Beeing - Your bees, your honey. Change recycling for good, from the corner of your kitchen. Dutch Students Make A Car Completely Out Of Recycled Materials. Using recycled materials to build cars has been all the rage lately in the automotive world—but most of those automakers note that their ideas are firmly in the realm of the concept or prototype. 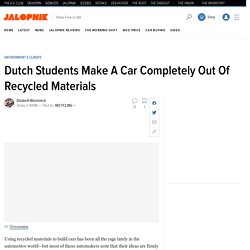 Yes, we can use recycled material to craft a car... but we don’t have to. Not yet. These Guys Found A Way To Make Leather Out Of Cactus Leaves To Help Save The Environment. The Tomahawk Missile Now Runs on Corn. PO1 Carmichael Yepez/DVIDS Modern cruise missiles are powered by turbine engines running off JP-10. 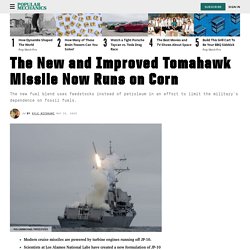 Scientists at Los Alamos National Labs have created a new formulation of JP-10 that uses feedstocks instead of petroleum.The result is a domestic, renewable fuel source that the lab believes will be significantly cheaper to use. One of the nation’s most prestigious national labs has developed a new fuel substitute for the same jet fuel that powers cruise missiles. Los Alamos National Labs has come up with a replacement fuel for JP-10 that uses corn bran and other feedstocks instead of petroleum products. The result is a fuel that can be sourced directly from America’s most plentiful crop, bypassing foreign sources. Traveling from London to Oslo by train for Oslo Architecture Triennale 2019.

When 16-year-old climate activist Greta Thunberg sailed across the Atlantic in late August to attend the United Nations Climate Action Summit in New York City, it was perhaps the most high-profile case yet of “flight shaming,” a growing movement urging people to avoid air travel and the greenhouse gas emissions that come with taking planes. 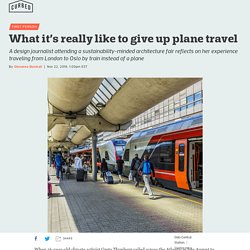 As it happens, this was also the year I challenged myself to travel less and use as little resources as possible when I do. So when I was planning my visit to the 2019 Oslo Architecture Triennale this fall, I had just the opportunity to walk the talk—especially given the show’s theme of “degrowth”, exploring architectural alternatives that promote human and ecological flourishing instead of infinite economic expansion. Getting to Oslo from London, where I’m based, is quickest by plane, just about two hours flying over the North Sea. EWP starts testing combined wave/solar power system. We first encountered Eco Wave Power back in 2012 when the company began testing a novel wave energy harvesting system that turned the rise and fall of coastal waters into electricity. 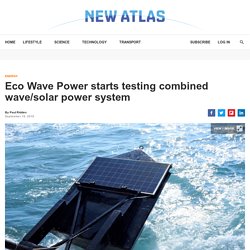 The system went from the lab to the real world in 2016, and a second grid-connected project was announced for Jaffa Port in Israel earlier this year. Now EWP is looking to get more from its energy harvesters by adding solar. EWP says that its latest venture came about after clients showed interest in having a number of different renewable energy sources as part of their energy mix.

Solar or wind farms could be an option, but not every location has enough space available for such things. Green R&D - Hypergiant. Algae is a single-celled organism that is capable of multiplying rapidly through the absorption of sunlight and carbon dioxide. 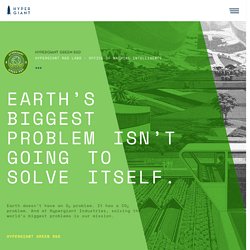 It is considered one of nature’s most efficient machines. Algae can be grown nearly anywhere and it requires very few nutrients to survive. It is high in proteins, lipids, and starches, making it suitable for a variety of uses, including as food. The Hypergiant Eos Bioreactor uses algae, specifically Chlorella Vulgaris which is capable of pulling CO2 from the atmosphere at a much higher rate than any other plant. Algae is the central ingredient in our bioreactor. Bioreactor absorbs CO2 400x more effectively than trees. When it comes to organic processes that we can leverage to tackle the runaway problem of climate change, the carbon-absorbing abilities of algae may be one of the most potent tools at our disposal. 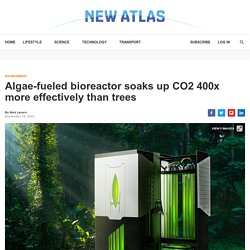 For years, scientists have been studying this natural phenomena in hope of tackling greenhouse gas emissions and producing eco-friendly biofuels, and now US company Hypergiant Industries has packaged the tech up into a box-shaped machine that can soak up as much carbon from the atmosphere as an acre of trees. Through the process of photosynthesis, the aquatic plant algae soaks up carbon dioxide, water and sunlight to produce energy. Naturally, the plant will use this energy to multiply and grow, but scientists have been experimenting with ways to capture it and convert it into biofuels instead, with some promising results. The newly announced Eos Bioreactor might look like someone left a giant Xbox in the garden, but Hypergiant Industries isn’t looking to play games here.

Vollebak's plant and algae T-shirt can biodegrade in just 12 weeks. Vollebak, the clothing company behind the jacket that reflects every color in the visible spectrum, has now created a T-shirt using just plants and algae. as the shirt is made from pulped eucalyptus and beech from sustainably managed forests, and algae grown in bioreactors, it will biodegrade in just 12 weeks. 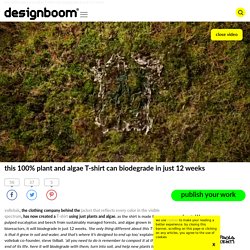 ‘the only thing different about this T-shirt is that it grew in soil and water, and that’s where it’s designed to end up too,’ explains vollebak co-founder, steve tidball. ‘all you need to do is remember to compost it at the end of its life. here it will biodegrade with them, turn into soil, and help new plants to grow.’ ‘algae can’t survive once it’s removed from water, so the algae on the T-shirt is no longer alive,’ tidball continues.

Time is running out for sand. What links the building you live in, the glass you drink from and the computer you work on? Sand. It is a key ingredient of modern life and yet, astonishingly, no-one knows how much sand there is or how much is being mined. Sand and gravel make up the most extracted group of materials, even exceeding fossil fuels1. Plastic collected by The Ocean Cleanup will be burned for electricity. Dutch non-profit The Ocean Cleanup plans to burn some of the plastic it collects from the Pacific Ocean, Dezeen has learned. Designers and environmentalists say the move "makes no sense". Cotton waste finds new life as eco-friendly plastic. Heat and carbon turn plastic waste into jet fuel.

China claims to have 'cracked' low cost production of lithium, political implications could be huge. In an article from May 14, the SCMP reports on an effort by the Chinese government to more easily separate lithium from other metals that are found in the same brines where it is produced. Currently, sorting lithium salts away from salts formed by magnesium requires multiple steps as the compounds are both physically similar and hard to separate with common chemical processes. China claims to have greatly simplified that process. Not only that, they claim this new, easier means of extracting lithium is already in commercial use inside China. If true, it would allow them to produce lithium from lower quality brines, and generate more lithium more quickly. The result could be that lithium produced from China can undercut the world market by a huge factor. Cube video captures the ocean’s plastic threat and designer’s solutions.

As part of Design Insider’s MATERIALS series, cube video co-produced, shot and edited a documentary looking at how design can combat the plastic problem in ‘living with plastics’. the documentary depicts dismaying shots of divers in a sea of pollution and garbage-lined beaches in the UK. the desaturated tones and nostalgic music during the first couple minutes set the tone for the planet’s concerning and dire future relationship with the material. yet, the film interviews five professionals who may have the key for the issue. all images from cube video‘s MATERIALS ‘living with plastics’ documentary over the last few years, humans have been shown how bad the problem is with plastic pollution, and by 2050 it is widely reported that the amount of plastic in the sea will outweigh the amount of fish!

The film suggests there is a glimmer of hope, as demand for change begins to build. but how do designers come into the equation? Meal-prep kits better for environment than a trip to the store, study finds. Supermarket uses banana leaves to wrap produce instead of plastic and people are loving it. 800-horsepower electric supercar hopes to usher in the methanol fuel cell age. Thomas vailly and atelier luma transform sunflowers to biodegradable materials. New process converts unrecyclable glass into saleable product. Energy Vault – Ground-breaking energy storage technology enabling a planet powered by renewable resources. Alternative Energy Technologies. Environmentally-friendly bricks made from sewage-treatment byproduct.

The Era Of Easy Recycling May Be Coming To An End. Sustainable 'plastics' are on the horizon: New sustainable biopolymer technology may one day free the world of its worst pollutant. China breeds super cockroach to eat away 50-tonne-a-day waste problem. Wood-based sponge hates water but loves oil. SodaStream embarks on marine waste cleanup mission in Honduras. Environmentally-friendly fabric created from microbial cellulose. Print Your City! turns plastic waste into 3D-printed street furniture. The Netherlands Is Paving Its Roads With Recycled Toilet Paper. A new life for olive oil waste. When olive oil is produced commercially, olives are crushed and mixed with water in mills. Sciencemag. How a Haitian village cooks with sunlight. Selah: Water from Stone. A fleet of trucks just drove themselves across Europe. "Light recycling" tech could save incandescent bulbs from obsolescence. NASA's Game-Changing Plan To Save Coral Reefs.

California’s Epic Drought: One Year of Water Left. The way to strike gold is to have a mine like a sewer - tech - 23 March 2015. After hearing this myth-buster, I'll never think the same again about paper bags, lettuce, or gold. A Thirsty, Violent World - The New Yorker. History, Travel, Arts, Science, People, Places. Soon we could make all sorts of things from sawdust.

PureMadi filters clean water and create jobs in the third world. How a Country With One of the World's Largest Economies Is Ditching Fossil Fuels. 10 Awesome Gadgets To Reuse Water. Peak Oil Review - Oct 15. Sponsored by Engineered Lighting Products, Journée Lighting, Kim Lighting, and WattStopper. Originally published in the September/October 2010 issue of GreenSource. Originally published in the October 2010 issue of Architectural Record.

Harvesting energy from all forms of sunlight.