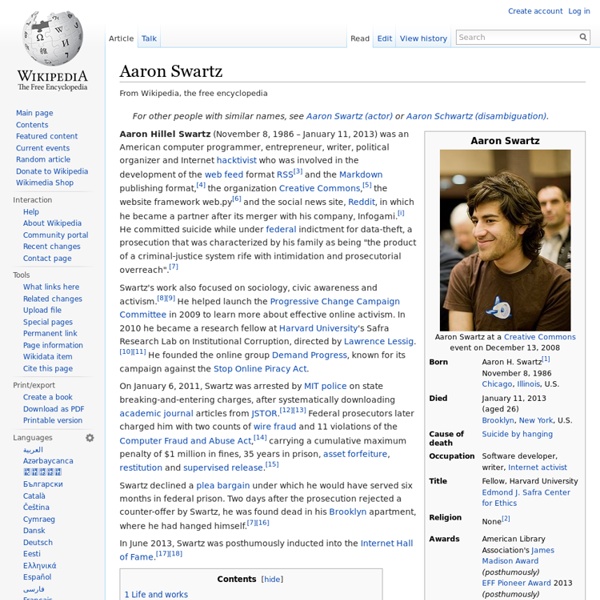 Aaron Hillel Swartz (November 8, 1986 – January 11, 2013) was an American computer programmer, entrepreneur, writer, political organizer and Internet hacktivist who was involved in the development of the web feed format RSS[3] and the Markdown publishing format,[4] the organization Creative Commons,[5] the website framework web.py[6] and the social news site, Reddit, in which he became a partner after its merger with his company, Infogami.[i] He committed suicide while under federal indictment for data-theft, a prosecution that was characterized by his family as being "the product of a criminal-justice system rife with intimidation and prosecutorial overreach".[7] Swartz's work also focused on sociology, civic awareness and activism.[8][9] He helped launch the Progressive Change Campaign Committee in 2009 to learn more about effective online activism. Swartz declined a plea bargain under which he would have served six months in federal prison. Life and works[edit] W3C[edit] Markdown[edit]

Science fact: Sci-fi inventions that became reality Image copyright Getty Images The story of a 14-year-old girl who won a landmark legal battle to be preserved cryogenically has many people wondering how such technology actually works - for many of us, it seems like something straight out of science fiction. But sci-fi has a long history of becoming science fact, as outlandish creations inspire real research. Remarkable realities Jean de Mailly Jean Pierier of Mailly, called Jean de Mailly, was a Dominican chronicler working in Metz in the mid-13th century. In his Latin chronicle of the Diocese of Metz, Chronica universalis Mettensis,[1] the fable of Pope Joan first appears in written form.[2] He is also the compiler of the Abbreviatio in gestis sanctorum, a collection of legends about the saints which is an important forerunner of the Golden Legend. Notes[edit] Editions[edit] Jean de Mailly, Abbreviatio in gestis et miraculis sanctorum. Supplementum hagiographicum.

Rise of the human exoskeletons On the outskirts of Pisa in a back room of a modern block, a machine is waiting for its operator. The device has arms and legs and is suspended by ropes from a metal frame. Its only other tether is a thick umbilical cable plugged into its back. Anastasius Bibliothecarius Anastasius Bibliothecarius or Anastasius the Librarian (c. 810 – c. 878) was bibliothecarius (literally "librarian") and chief archivist of the Church of Rome and also briefly an Antipope.[1] Family and education[edit] He was a nephew of Bishop Arsenius of Orte, who executed important commissions as Papal legate. Anastasius learned the Greek language from Eastern Roman monks and obtained an unusual education for his era, such that he appears to be the most learned ecclesiastic of Rome in the barbaric period of the 9th century. Abbot of Santa Maria and secretary of Nicholas I[edit] During the pontificate of Pope Nicholas I (858–867) Anastasius was abbot of Santa Maria in Trastevere on the farther side of the Tiber.

We’re About 100 Years Away From a Real RoboCop We all love RoboCop. Sure, there are some morally and ethically questionable aspects of an unstoppable privatized security bot, but the armor and cyborgian capabilities are pretty freaking awesome. Whether it’s in Paul Verhoeven’s 1987 original or José Padilha’s remake out today, RoboCop is simply as badass as it gets. He’s also almost a century away from being even remotely feasible. Why? Pope Joan Pope Joan is a woman who, according to popular legend, reigned as pope for a few years during the Middle Ages. Her story first appeared in chronicles in the 13th century and subsequently spread widely through Europe. The story was widely believed for centuries, but modern scholars regard it as fictional.[1][2][3] Most versions of her story describe her as a talented and learned woman who disguised herself as a man, often at the behest of a lover. In the most common accounts, due to her abilities, she rose through the church hierarchy and was eventually elected pope. Her gender was revealed when she gave birth during a procession, and she died shortly after, either through murder or natural causes.

Korean Method-2 Giant Manned Bipedal Robot (GMBR) Exo-Bionic Exoskeleton for Future Warfare: Future Soldier/Warfighter Going ‘Avatar’-Style with Armored, Armed/Weaponized and Camouflaged Variant? By David Crane david (at) defensereview (dot) com Photo(s) Credit: Getty Images and/or Hankook Mirae Technology December 27, 2016Last updated on 12/27/16. Yang’s so excited about it, in fact, that he’s apparently already put about 242 billion won (that’s $200 million) into the program since 2014 to “bring to life what only seemed possible in movies and cartoons”. DefenseReview (DR) appreciates Yang’s and HMT’s enthusiasm and futuristic vision, and we hope the manned robot/exoskeleton really works. Lawrence Durrell Lawrence George Durrell (/ˈdʊərəl, ˈdʌr-/;[1] 27 February 1912 – 7 November 1990) was an expatriate British novelist, poet, dramatist, and travel writer, though he resisted affiliation with Britain and preferred to be considered cosmopolitan. It has been posthumously suggested that Durrell never had British citizenship, though, more accurately, he became defined as a non-patrial in 1968, due to the amendment to the Commonwealth Immigrants Act 1962.[2] Hence, he was denied the right to enter or settle in Britain under new laws and had to apply for a visa for each entry. His most famous work is the tetralogy The Alexandria Quartet. Life and work[edit] Durrell was born in Jalandhar, British India, the eldest son of Indian-born British colonials Louisa and Lawrence Samuel Durrell.

Machine Intelligence Research Institute - Wikipedia The Machine Intelligence Research Institute (MIRI), formerly the Singularity Institute for Artificial Intelligence (SIAI), is a non-profit organization founded in 2000 to research safety issues related to the development of Strong AI. Nate Soares is the executive director, having taken over from Luke Muehlhauser in May 2015.[3] MIRI's technical agenda states that new formal tools are needed in order to ensure the safe operation of future generations of AI software (friendly artificial intelligence).[4] The organization hosts regular research workshops to develop mathematical foundations for this project,[5] and has been cited as one of several academic and nonprofit groups studying long-term AI outcomes.[6][7][8] History[edit] Whereas the short-term impact of AI depends on who controls it, the long-term impact depends on whether it can be controlled at all. [...]

Liber Pontificalis The Liber Pontificalis (Latin for Book of the Popes) is a book of biographies of popes from Saint Peter until the 15th century. The original publication of the Liber Pontificalis stopped with Pope Adrian II (867–872) or Pope Stephen V (885–891),[1] but it was later supplemented in a different style until Pope Eugene IV (1431–1447) and then Pope Pius II (1458–1464).[2] Although quoted virtually uncritically from the 8th to 18th century,[3] the Liber Pontificalis has undergone intense modern scholarly scrutiny as an "unofficial instrument of pontifical propaganda. Singularity Summit - Wikipedia The Singularity Summit is the annual conference of the Machine Intelligence Research Institute. It was started in 2006 at Stanford University[1][2] by Ray Kurzweil, Eliezer Yudkowsky, and Peter Thiel, and the subsequent summits in 2007, 2008, 2009, 2010, and 2011 have been held in San Francisco, San Jose, New York City, San Francisco, and New York, respectively. Some speakers have included Sebastian Thrun, Rodney Brooks, Barney Pell, Marshall Brain, Justin Rattner, Peter Diamandis, Stephen Wolfram, Gregory Benford, Robin Hanson, Anders Sandberg, Juergen Schmidhuber, Aubrey de Grey, Max Tegmark, and Michael Shermer.