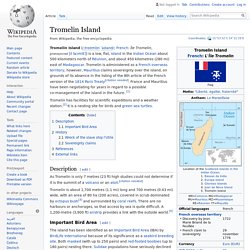 Description[edit] Landscape of Tromelin Island. As Tromelin is only 7 metres (23 ft) high studies could not determine if it is the summit of a volcano or an atoll. Hope Diamond. The Hope Diamond is one of the most legendary jewels of history, with ownership records dating back almost four centuries. 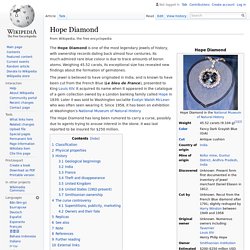 Its much-admired rare blue colour is due to trace amounts of boron atoms. Weighing 45.52 carats, its exceptional size has revealed new findings about the formation of gemstones. The Hope Diamond has long been rumored to carry a curse, possibly due to agents trying to arouse interest in the stone. It was last reported to be insured for $250 million. List of helicopter prison escapes. Wikimedia list article Mountjoy Prison where on October 31, 1973 three IRA members escaped in a hijacked helicopter.[1] A helicopter prison escape is made when an inmate escapes from a prison by means of a helicopter. 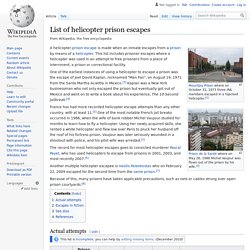 This list includes prisoner escapes where a helicopter was used in an attempt to free prisoners from a place of internment, a prison or correctional facility. Effect of spaceflight on the human body. Astronaut Marsha Ivins demonstrates the effects of zero-G on her hair in space Venturing into the environment of space can have negative effects on the human body.[1] Significant adverse effects of long-term weightlessness include muscle atrophy and deterioration of the skeleton (spaceflight osteopenia).[2] Other significant effects include a slowing of cardiovascular system functions, decreased production of red blood cells, balance disorders, eyesight disorders and changes in the immune system.[3] Additional symptoms include fluid redistribution (causing the "moon-face" appearance typical in pictures of astronauts experiencing weightlessness),[4][5] loss of body mass, nasal congestion, sleep disturbance, and excess flatulence. 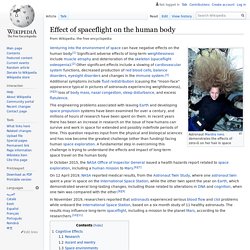 The engineering problems associated with leaving Earth and developing space propulsion systems have been examined for over a century, and millions of hours of research have been spent on them. Death during consensual sex. Death can occur during consensual sex for a number of reasons, generally because of the physical strain of the activity, or because of unusual extenuating circumstances.

There are various euphemisms for death during sex, including "dying in the saddle" or the French "la mort d'amour".[1] Health and physiology[edit] Sexual intimacy, as well as orgasms, increases levels of the hormone oxytocin, also known as "the love hormone", which helps people bond and build trust.[2][3][4] Sexual activity is also known as one of many mood repair strategies, which means it can be used to help dissipate feelings of sadness or depression.[5] Notable cases[edit] Pope John XII (d.964), who may have died during consensual sex with a mistress.

Pitcairn Islands. British overseas territory in the South Pacific British Overseas Territory in United Kingdom Pitcairn is the least populous national jurisdiction in the world.[9] The Pitcairn Islanders are a biracial ethnic group descended mostly from nine Bounty mutineers and a handful of Tahitian captives, an event that has been retold in many books and films. 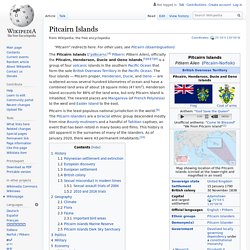 Foster's rule. Foster's rule, also known as the island rule or the island effect, is an ecogeographical rule in evolutionary biology stating that members of a species get smaller or bigger depending on the resources available in the environment. 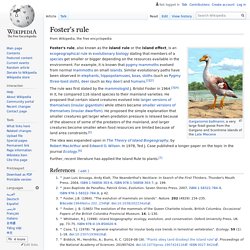 For example, it is known that pygmy mammoths evolved from normal mammoths on small islands. Similar evolutionary paths have been observed in elephants, hippopotamuses, boas, sloths (such as Pygmy three-toed sloth), deer (such as Key deer) and humans.[1][2] The rule was first stated by the mammologist J. List of extreme points of the United States. List of geographical locations in the United States that extend farther in one direction than any other location in the country This is a list of points in the United States that are farther north, south, east, or west than any other location in the country. 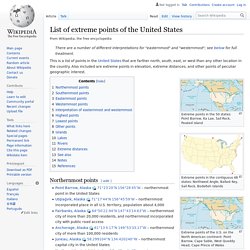 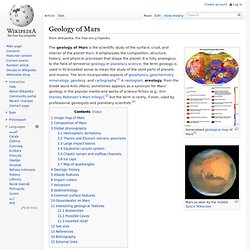 It emphasizes the composition, structure, history, and physical processes that shape the planet. It is fully analogous to the field of terrestrial geology. In planetary science, the term geology is used in its broadest sense to mean the study of the solid parts of planets and moons. Hanged, drawn and quartered. Breast-shaped hill. Overview[edit] The name Mamucium that gave origin to the name of the city of Manchester is thought to derive from the Celtic language meaning "breast-shaped hill", referring to the sandstone bluff on which the fort stood; this later evolved into the name Manchester.[2][3] Mostly breast-shaped hills are connected with local ancestral veneration of the breast as a symbol of fertility and well-being. 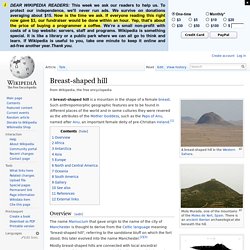 It is not uncommon for very old archaeological sites to be located in or below such hills, as on Samson, Isles of Scilly, where there are large ancient burial grounds both on the North Hill and South Hill,[4][5] or Burrén and Burrena, Aragon, Spain, where two Iron Age Urnfield culture archaeological sites lie beneath the hills.[6] Travelers and cartographers in colonial times often changed the ancestral names of such hills. Africa[edit] African Great Lakes Horn of Africa Naasa Hablood in Somalia Indian Ocean Southern Africa Omatako Mountain south-west of Otjiwarongo in Namibia West Africa.

Scaphism. Ancient Persian form of execution Scaphism, also known as the boats, or mistakenly as cyphonism,[1] is an alleged ancient Persian method of execution. The word comes from the Greek σκάφη, skáphe, meaning "anything scooped (or hollowed) out". It entailed trapping the victim between two boats, feeding and covering them with milk and honey, and allowing them to fester and be devoured by insects and other vermin over time. The practice is considered to be a purely literary invention of the Ancient Greek literature as it has never been attested in Ancient Persia (primarily Achaemenid Empire).

Bubbly Creek. Phobos monolith. The location of the monolith (HiRISE image PIA10368) The general vicinity of the monolith is a proposed landing site for a Canadian Space Agency vehicle, funded by Optech and the Mars Institute, for an unmanned mission to Phobos known as PRIME (Phobos Reconnaissance and International Mars Exploration).[3] The PRIME mission would be composed of an orbiter and lander, and each would carry four instruments designed to study various aspects of Phobos' geology.[5] At present, PRIME has not been funded and does not have a projected launch date. The object appears in Mars Global Surveyor images SPS252603 and SPS255103, dated 1998.