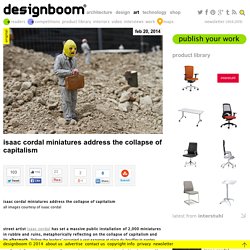 People's Climate March. Anger is an Energy - We talk to John Lydon » Flux Magazine. John Lydon on Russell Brand's call for revolution: 'The most idiotic thing I've ever heard' – video. How Rich Are You? Victoria and Albert Museum. Updates from the Umbrella Movement Many of the social and political movements that form Disobedient Objects are from global and continuing struggles. 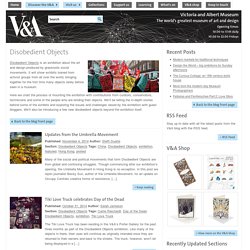 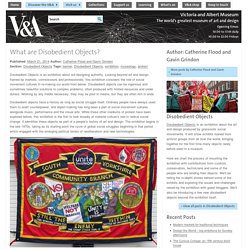 Looking beyond art and design framed by markets, connoisseurs and professionals, this exhibition considers the role of social movement cultures in re-making our world from below. Disobedient objects can be ingenious and sometimes beautiful solutions to complex problems, often produced with limited resources and under duress. 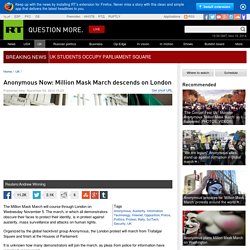 The march, in which all demonstrators obscure their faces to protect their identity, is in protest against austerity, mass surveillance and attacks on human rights. Organized by the global hacktivist group Anonymous, the London protest will march from Trafalgar Square and finish at the Houses of Parliament. Russell Brand releases Parklife parody, world looks for other three horsemen. The perfect response to the Parklife meme? 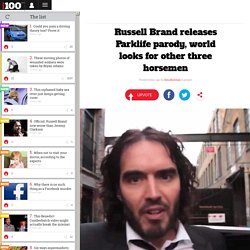 Decide for yourself. Warning there is a rap at the end of this video. More: People are now trolling Russell Brand by tweeting graphs at him The perfect response to the Parklife meme? Decide for yourself. Especially-when-it-comes-to-our-institutional-addiction-9823292. Recently, provoked by criticism from John Lydon, Brand adjusted that view, but only slightly. 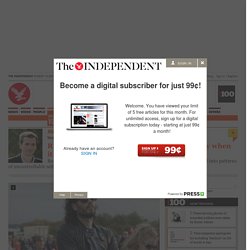 Although piqued into observing that “if there was something worth voting for, I'd vote for it”, he introduced a crucial caveat, noting how global trade agreements increasingly prevent change happening at a national level. Voting for a national government, he is suggesting, is pointless if all the important decisions are taken elsewhere. Russell Brand In Conversation With Owen Jones. Thousands of protesters hit London for Million Mask March. Thousands of anticapitalist protesters (and one book-promoting comedian) hit the streets in London for the Million Mask March, the global day of protest loosely organised by Anonymous. 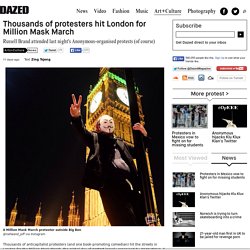 A number of clashes broke out between protesters and riot police armed with batons. Ten people were arrested. The march gathered in central London before people made their way towards Westminster and set off fireworks in Parliament Square, while other groups diverged from the crowd and headed towards Buckingham Palace and the BBC. Climate Revolution. Vivienne Westwood on capitalism and clothing: 'Buy less, choose well, make it last' 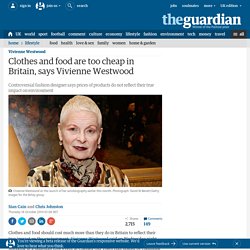 Speaking at a Guardian Live event at Chelsea Old Town Hall hosted by columnist Deborah Orr, the controversial fashion designer said: “Clothes should cost a lot more than they do – they are so subsidised. “Food should cost most more too – you know something is wrong when you can buy a cooked chicken for £2. LET'S START A PUSSY RIOT. #100DaysOfActivism wants to redefine online activism. #100DaysOfActivism wants to explore what it means to be an activist, one Tumblr post at a time. 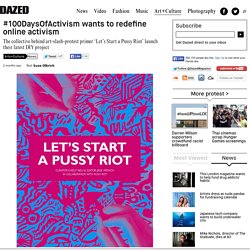 The newly-launched project is the collective work of Emely Neu, Jade French, and Verity Flecknell – the trio behind the art-meets-activism primer Let’s Start a Pussy Riot – who came up with the project after speaking to hundreds of British and German students while on their book tour. "What became a re-occurring topic was that people tended to shy away from labelling themselves an 'activist'," Emely tells Dazed, "and so did we. This made us question the traditional definition of what an activist is and does, and we came to understand that personal activism can take shape in a myriad of forms - 'armchair activist', 'art activist', 'internet activist', 'protest activist'. " Tweet-Streaming Dress Helps Activists’ Voices Get Heard. To give the Swedish youth a louder voice in their country’s political decisions, progressive organization Crossing Boarders and creative agency Deportivo have created an LED-powered dress that streams tweets from young activists. 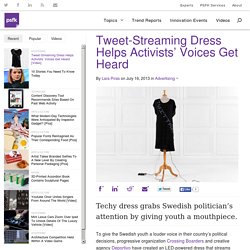 The dress launched during Sweden’s Almedalen Week that sees thousands of politicians, public relations workers and celebrities come together for a summit to express their views on current affairs. The team behind the idea felt that something was deeply missing from the event: the voice of the youth. The dress was worn by a group of ‘ambassadors’ who streamed comments on issues like gender equality and affordable housing for young people. Young Swedes were also encouraged to tweet using the hashtag #Twitterklänning (‘Twitter dress’). The campaign accumulated a total of 454 tweets and the dress succeeded in translating the ideals of the Swedish youth as it received huge attention and even made onto Swedish news channels. Amazing Watercolor Paintings by Lora Zombie. Pirate Manu | On 25, Oct 2013 Her name is Lora and she’s probably British because of her website url (.co.uk).

David Cameron warns that second global crash is looming. David Cameron has issued a stark message that “red warning lights are flashing on the dashboard of the global economy” in the same way as when the financial crash brought the world to its knees six years ago. Writing in the Guardian at the close of the G20 summit in Brisbane, Cameron says there is now “a dangerous backdrop of instability and uncertainty” that presents a real risk to the UK recovery, adding that the eurozone slowdown is already having an impact on British exports and manufacturing. His warning comes days after the Bank of England governor, Mark Carney, claimed a spectre of stagnation was haunting Europe. The International Monetary Fund managing director, Christine Lagarde, expressed fears in Brisbane that a diet of high debt, low growth and unemployment may yet become “the new normal in Europe”.

“The eurozone is teetering on the brink of a possible third recession, with high unemployment, falling growth and the real risk of falling prices too,” Cameron writes.