Who runs the world? Girls! Let’s celebrate all the ladies this March. For more than a century March has been the official month to celebrate all the independent women out there, with March 8 marking International Women’s Day. 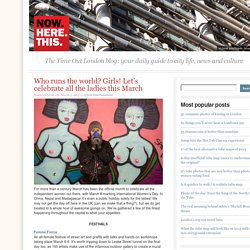 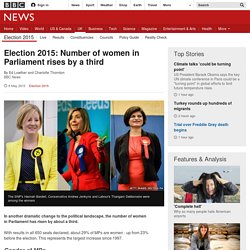 With results in all 650 seats declared, about 29% of MPs are women - up from 23% before the election. This represents the largest increase since 1997. The proportion of female Conservative and Labour MPs has increased, despite an overall fall in the number of Labour MPs. But the biggest rise in female representation in the Commons came from the Scottish National Party, which now has 20 female MPs, up from just one. All seven Lib Dem women who were MPs in the last Parliament have lost their jobs. 'Suffragette' is the movie feminists have been dreaming of: Column. In the early days of the women’s movement, we feminists dreamed of a time when movie theaters across the country would show a feature-length film that accurately depicted our work and the passionate energy of our movement — a revolution that we hoped would change the world. 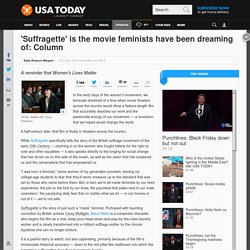 A half-century later, that film is finally in theaters across the country. While Suffragette specifically tells the story of the British suffrage movement of the early 20th Century — zooming in on the women who fought bitterly for the right to vote and other equalities — it also speaks directly to the longing for social change that has driven us on this side of the ocean, as well as the vision that has sustained us and the camaraderie that has empowered us. “I was born a feminist,” some women of my generation proclaim, leaving my college-age students to fear that they’ll never measure up to the standard that was set by those who came before them. Women protest tampon tax by free-bleeding outside parliament. We’ve all seen the headlines about the tampon tax – the fact that the government rejected a petition to stop women from having to pay a 5% tax on sanitary products because they are not considered to be an essential item. 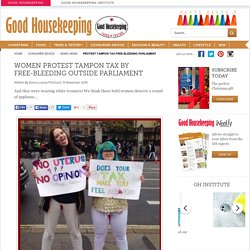 Apparently, they are luxury items and therefore, as women who have no choice whether or not to have a menstrual cycle, we should pay extra for them. RELATED: WHAT'S NEXT FOR THE TAMPON TAX? For obvious reasons, the government’s decision to keep the tax has sparked debate and angered women up and down the country. Artist Creates Series Of Paintings Promoting Women's Rights & Female Empowerment. They say art, media and entertainment are arguably the biggest vehicles of communication that exist today. 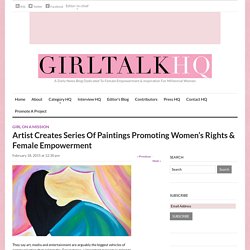 For instance, a important message is going to be given a much bigger platform if it is said by Beyonce at the MTV VMA’s. However, long before the media and entertainment become the driving force behind our celebrity obsessed culture today, art has been around for centuries. Paintings, sculptures and other forms of visual artistry is something that is common to every empire, every ethnic group, every time period and every culture throughout history. While it may seem like Reality TV is our “dumbed-down” version of what real art is, there are many artists today using their creative talent to share importance messages in society, such as female empowerment, women’s rights and gender equality. Dipti is an IT professional in the finance industry and has worked with leading investment banks like Credit Suisse and Bank of America. “The poor woman!” Sport England launches fitness campaign to encourage women to take up sport a...

Sport England has launched a marketing campaign to encourage more women to take up sport and physical exercise, backed by celebrities including Clare Balding, Dame Kelly Holmes and Sally Gunnell. 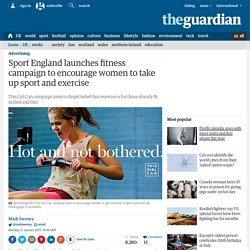 This Girl Can kicks off with a TV ad launching during ITV’s Coronation Street on Monday night featuring women of all shapes, sizes and ages getting stuck into sport and exercise. The 90-second TV campaign, created by ad agency FCB Inferno, features normal women - no models were used - giving it their all, to a sound track of Missy Elliott’s Get Ur Freak On.

Posters will run nationwide featuring women from all walks of life with slogans such as: “I jiggle, therefore I am”, “Hot and not bothered” and “Sweating like a pig, feeling like a fox”. “We looked very carefully at what women were saying about why they felt sport and exercise was not for them,” said Jennie Price, chief executive of Sport England. 2016 Pirelli Calendar by Annie Leibovitz Starring Amy Schumer, Serena William... See more photos of: Read Caption Vogue may earn compensation on these sales through affiliate programs. 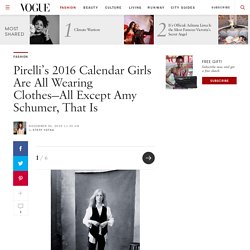 No Sir retail platform addresses male-dominated industry. Terese Alstin, founder of inflatable-helmet brand Hövding, has launched an online shop and a Malmö showroom presenting the work of independent women designers from around the world (+ slideshow). 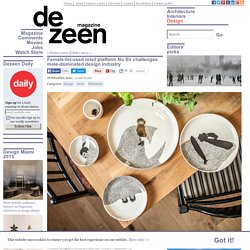 The No Sir platform showcases design from a range of disciplines including illustration, lighting, furniture and textiles, with many of the products new to the Swedish market. "No Sir is a tribute to female designers who, on top of being innovative, creating amazingly unique things and running their companies, must fight for recognition and prove themselves over and over again," Alstin told Dezeen. The majority of products are from lesser-known designers, with names including Camille Walala, Marlène Huissoud and Pia Wüstenberg, although there are some male and female design duos such as Daniel Emma. Jennifer Lawrence expresses anger at Hollywood's gender pay gap. Jennifer Lawrence has come out hard against the gender pay inequality in Hollywood, in an impassioned essay she wrote for her friend Lena Dunham’s Lenny Letter newsletter. 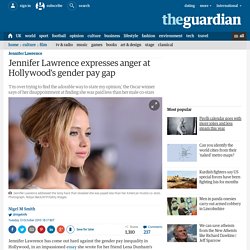 The Hunger Games actor for the first time addresses revelations from the Sony hack that she earned considerably less than her male co-stars in American Hustle, despite her major role in the film and bankable status as a Hollywood A-lister and Oscar winner. “When the Sony hack happened and I found out how much less I was being paid than the lucky people with dicks, I didn’t get mad at Sony,” she writes. “I got mad at myself.