Following MedStar partnership, Uber hires new team to work with providers. Uber continues to see healthcare as a major area for growth, according to Lindsay Elin, head of Federal and Community Affairs at Uber. 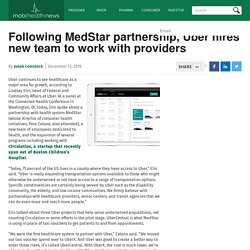 At a panel at the Connected Health Conference in Washington, DC today, Elin spoke about a partnership with health system MedStar (whose director of consumer health initiatives, Pete Celano, also attended), a new team of employees dedicated to health, and the expansion of several programs including working with Circulation, a startup that recently spun out of Boston Children’s Hospital. “Today, 75 percent of the US lives in a county where they have access to Uber,” Elin said. "Uber is really expanding transportation options available to those who might otherwise be underserved or not have access to a range of transportation options. Specific constituencies are certainly being served by Uber such as the disability community, the elderly, and low income communities.

“We were the first healthcare system to partner with Uber,” Celano said. Healthcare Goes Digital: Fewer Hospitals, Empowered Doctors, and a Medical Sharing Economy. Digital tools hold the promise of not just making people healthier, but radically upending the structure of the healthcare industry. 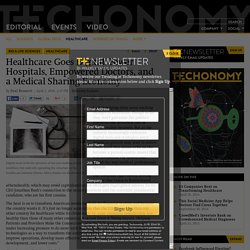 (Photo: Africa Studio via Shutterstock) Tech is helping drive some exciting changes in healthcare, though so far they don’t galvanize the public’s attention like driverless cars or virtual reality headsets. But as the industry increasingly embraces digital tools and strategies, every American patient may start to notice a holy grail that seems to be on the horizon: a patient-centric model that will streamline the system and upend the way medical professionals operate. One company aggressively driving toward that vision is Boston-based athenahealth, which may avoid capitalization but often gets highlighted anyway for its CEO Jonathan Bush’s connection to the recent president and the erstwhile presidential candidate, who are his first cousins.

The heat is on to transform American medicine, both for financial reasons and because the country wants it. Uber, Airbnb and consequences of the sharing economy: Research roundup. The leading businesses that are advancing the concept of the “sharing economy” are in many respects no longer insurgents and newcomers. 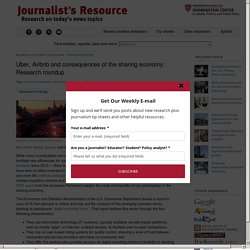 The size and scale of Uber, Airbnb and several other firms now rival, or even surpass, those of some of the world’s largest businesses in transportation, hospitality and other sectors. As the economic power of these technology-driven firms grows, there continue to be regulatory and policy skirmishes on every possible front, across cities and towns spanning the United States, Europe and beyond. The Economics and Statistics Administration of the U.S. Commerce Department issued a report in June 2016 that attempts to define and map out the contours of this emerging business sector, labeling its participants “digital matching firms.” That report defines this sector through the four following characteristics: Nationalist movements could smother Justin Trudeau: Paul Wells. It’s way too early to guess how this will turn out, but it’s becoming clear that Justin Trudeau now leads a government in crisis. 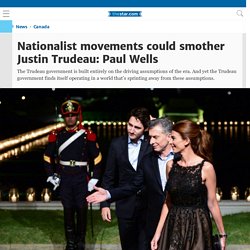 It’s not a crisis Trudeau made, but he’s stuck with it. How he responds will go far toward making or breaking his career as prime minister. I’m talking about the crisis of globalization: the broad challenge to the gospel of open borders, free trade and elite accommodation that was viewed, by many Western leaders, as synonymous with progress from at least the late 1980s until the financial crisis of 2008. In Europe, this strong consensus around a few simple ideas led to the rapid expansion of the European Union into the continent’s post-Communist east, the unification of Germany and the creation of the common euro currency. In the United States, George H.W.

Later, in Britain, it was the era of Tony Blair. The Trudeau government is built entirely on the driving assumptions of the era. The nationalist counter-revolutions don’t want open borders. Crossix Completes Largest-Ever Expansion of Connected Health Data. Crossix Solutions, the leader in consumer-centric healthcare analytics, has completed its largest-ever expansion of connected health data—not just in terms of the volume of data, but in its uniqueness as well. 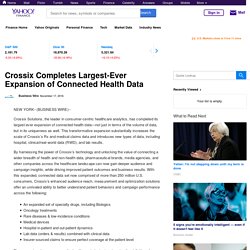 This transformative expansion substantially increases the scale of Crossix’s Rx and medical claims data and introduces new types of data, including hospital, clinical/real-world data (RWD), and lab results. By harnessing the power of Crossix’s technology and unlocking the value of connecting a wider breadth of health and non-health data, pharmaceutical brands, media agencies, and other companies across the healthcare landscape can now gain deeper audience and campaign insights, while driving improved patient outcomes and business results. Multiple use cases, across various condition categories, are enabled with these exciting data connections. What our industry colleagues are saying: To learn more about Crossix, visit www.crossix.com.