New Science 1: Pushing the edge of climate research. Back to the new-old way of doing science. For those of you who are die-hard puzzle solvers here to spar about cutting edge research: good news, here’s where we begin the long awaited update to Dr David Evans’ climate research. 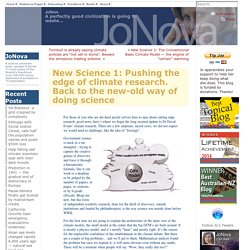 There are a few surprises, sacred cows, we did not expect we would need to challenge, like the idea of “forcings”. Government science is stuck in a rut, strangled – trying to capture the creative genius of discovery and force it through a bureaucratic formula, like it can work to a deadline or be judged by the number of papers, or pages, or citations, or by b-grade officials. Blogs are new, but this form of independent scientific research, done for the thrill of discovery, outside institutions and funded by philanthropists, is the way science was mainly done before WWII.

New Science 2: The Conventional Basic Climate Model — the engine of “certain” warming. This is the most uncontroversial post ever put on this blog — it’s everything the IPCC would agree with and the key to their unshakable confidence. 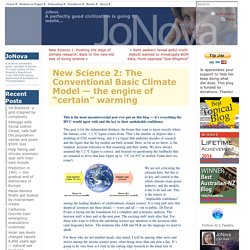 This post is for the independent thinkers, the brains that want to know exactly where the famous, core, 1.2 °C figure comes from. That’s the number of degrees that a doubling of CO2 would bring, and it’s a figure that underlies decades of research and the figure that the big models are built around. Here, as far as we know, is the simplest, accurate reference to that reasoning and their maths. We have always assumed the 1.2 °C figure is correct, and focused on questioning the feedbacks that are assumed to drive that base figure up to 3°C (or 6°C or molten-Venus-here-we-come!)

We are not criticizing the estimate here, but this is so key and central to the whole climate-clean-green industry, and the models, it has to be laid out. Dr David Evans, 23 September 2015, David Evans’ Basic Climate Models Home, Intro, Next, Nomenclature. New Science 3: The Conventional Basic Climate Model — In Full. Read the post to see it properly. 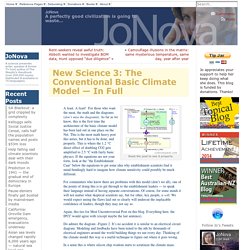 A feast. A feast! For those who want the meat, the math and the diagrams (don’t miss the diagrams). As far as we know, this is the first time the architecture of the basic climate model has been laid out in one place on the Net. This is the most math heavy post this series, but it has to be done, and properly. For commenters who know there are problems with this model (don’t we all), one of the points of doing this is to get through to the establishment leaders — to speak their language instead of having separate conversations.

Again, this ties for Most Uncontroversial Post on this blog. Do admire the diagram –Figure 2. In a sense this is where silicon chip wisdom starts to scrutinize the climate maze. – Jo Dr David Evans, 24 September 2015, David Evans’ Basic Climate Models Home, Intro, Previous, Next, Nomenclature. New Science 4: Error 1: Partial Derivatives. And so begins the list of errors. 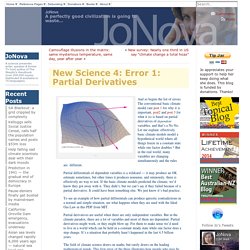 The conventional basic climate model (see post 1 for why it is important, post2 and post 3 for what it is) is based on partial derivatives of dependent variables, and that’s a No No. Let me explain: effectively basic climate models model a hypothetical world where all things freeze in a constant state while one factor doubles.* But in the real world, many variables are changing simultaneously and the rules are different. Partial differentials of dependent variables is a wildcard — it may produce an OK estimate sometimes, but other times it produces nonsense, and ominously, there is effectively no way to test. If the basic climate models predicted the climate, we’d know they got away with it. They didn’t, but we can’t say if they failed because of a partial derivative. Partial derivatives are useful when there are only independent variables. New Science 5: Error 2: Model architecture means all feedbacks work through the surface temperature? And the series continues, poking another hole in the models, with bigger holes to come. 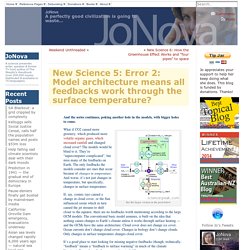 See the larger version in the post below What if CO2 caused more greenery, which produced more volatile organic gases, which increased rainfall and changed cloud cover? New Science 6: How the Greenhouse Effect Works and “four pipes” to space. The Earth’s atmosphere is a leaky bucket, with four big holes (and a lot of little ones). 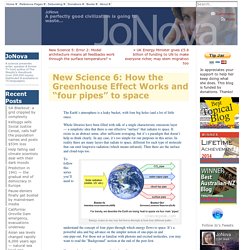 Whole libraries have been filled with talk of a single characteristic emissions layer — a simplistic idea that there is one effective “surface” that radiates to space. It exists in an abstract sense, after sufficient averaging, but it’s a paradigm that doesn’t help us think clearly. In any case, it’s too simple for our purposes in this series. In reality there are many layers that radiate to space, different for each type of molecule that can emit longwave radiation (which means infrared). Then there are the surface and cloud-tops too. Energy comes in one way but leaves through at least four different paths.

To follow this series you’ll need to understand the concept of four pipes through which energy flows to space. For a photon there are a lot of paths to space Some photons at Earths surface will be at the right wavelength to head straight for Jupiter and stopped by nothing much in the sky. New Science 7: Rerouting Feedback in Climate Models. Conventional models assume increasing atmospheric CO2 warms the surface, then apply the feedbacks to the surface warming. 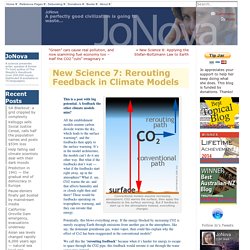 But if feedbacks start up in the atmosphere instead, everything changes. This is a post with big potential. New Science 8: Applying the Stefan-Boltzmann Law to Earth. Energy is emitted to space from many different heights in the atmosphere, depending on the wavelength (not to scale, suggestive only). 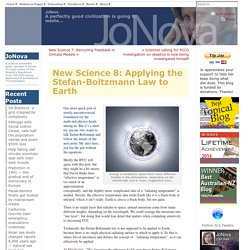 One more quick post of mostly uncontroversial foundation for the math-and-physics-heads among us. But it’s a must for anyone who wants to talk Stefan-Boltzmann and follow the details of the next posts. My intro here, just has the gist without the equations. Mostly the IPCC will agree with this post, but they might be a bit snooty that David thinks their “effective temperature” is too much of an approximation conceptually, and the slightly more complicated idea of a “radiating temperature” is needed. Strictly, the effective temperature idea treats Earth like it is a black-body at infrared, which it isn’t really.

There is no single layer that radiates to space, instead emissions come from many different heights, depending on the wavelength. . – Jo. New Science 9: Error 3: All Radiation Imbalances Treated the Same — The Ground is not the sky! The ground is not the sky Here’s a big big flaw that is easy for anyone to understand, yet has lain at the core of the climate models since at least 1984. 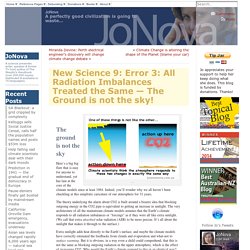 Indeed, you’ll wonder why we all haven’t been chuckling at this simplistic caricature of our atmosphere for 31 years. New Science 10: Whatever controls clouds controls the climate. How much sunlight makes it to the surface? 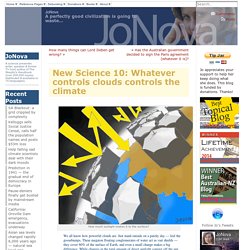 We all know how powerful clouds are. Just stand outside on a patchy day — feel the goosebumps. These megaton floating conglomerates of water act as vast shields — they cover 60% of the surface of Earth, and even a small change makes a big difference. While changes in the total amount of direct sunlight coming off the sun are very small, the changes to the amount of reflecting surfaces floating above Earth are, proportionally, at least twice as large, and possibly much much more influential. The IPCC includes changes in sunlight (TSI), so it does not make sense to ignore the larger and more powerful changes in the Earth’s albedo (fraction of sunlight that is reflected) due to “external” factors (due to factors other than feedbacks to surface warming).

There are lots of reasons clouds might change that are not included in standard climate models. We haven’t seen this comparison done elsewhere, though it may have been. – Jo. New Science 11: An Alternative Modeling Strategy. All pipes lead to Space Inexorably, energy is headed for the coldest vacuum. It’s just a question of how long and what path it takes to get there.

On Earth there are four main “pipes” to space — the CO2, water vapor, cloud tops, and surface pipes (see post 6). The basic establishment model treats “trapped” heat as if it were “adding heat” (see post 9). New Science 12: How do we model the thermal inertia of the Earth? New Science 13: The Start of a New Architecture for Climate Models. In most ways, David Evans’ alternative model is exactly the same as the conventional model. But a reconnection of one forcing, and an additional factor, can make all the difference. Finally, climate model architecture is getting analyzed and discussed — the conventional structure has been in place for over 40 years. New Science 14: Greenhouse Emission Layers — which pipe is the biggest? Here we get into the nitty-gritty (as much as we can) of the energy coming off the planet. Looking at the spectrum of outgoing infrared we can learn a lot from the Nimbus data.

In the graph below we can see a lot more energy comes from certain wavelengths, and given that the curve would follow the “grey” shape if it was a single body emitting, we can also see how some “pipes” are blocked. New Science 15: Modeling outgoing radiation (OLR) OLR — outgoing longwave radiation — is so key, so central to the climate debate that if we had top notch data on the radiation coming off the planet, we would have solved the effect of extra CO2 a long time ago.

That we don’t have a specific satellite monitoring these changes in detail is like the dog that didn’t bark. Apparently a specialist OLR satellite was to be launched in 2015. More info on the RAVAN Satellite here (was supposed to launch in Sept 2015). (UPDATE: Planned for 2016) h/t siliggy. There are four main pipes to space, and in David’s work each pipe is considered separately. New Science 16: Building the alternative model and why it solves so many major problems. In typical style I looked at this draft and told David that the second half of his post should be at the top (that’s where he discusses how his model solves so many problems). New Science 17: Solving the mystery of the missing “Hotspot” Things are hotting up. New Science 18: Finally climate sensitivity calculated at just one tenth of official estimates. In years to come it may be recognized that this blog post produced the first modeled accurate figure for climate sensitivity.

New Science 19: The invisible nameless model that controls the whole field of climate science. New Science 19b: A Synopsis. We’ve had a lot of requests for a single document to summarize the blog posts so far. Some people like to print and read all in one place (that’s me). I hope this helps. Skeptics on threads are busy cracking away at getting a rerouting mechanism fleshed out. The quest… thanks to everyone who is supporting this project in so many ways, whether it be via email, sharing with others, or through donations. We really do appreciate it.