The Rising Trend of Minimalist Marketing – Life Without Pants. There is a lot of talk about minimalism these days around the web. 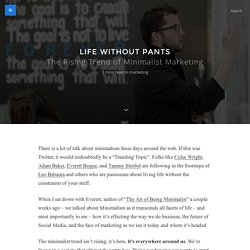 If this was Twitter, it would undoubtedly be a “Trending Topic”. Folks like Colin Wright, Adam Baker, Everett Bogue, and Tammy Strobel are following in the footsteps of Leo Babauta and others who are passionate about living life without the constraints of your stuff. When I sat down with Everett, author of “The Art of Being Minimalist” a couple weeks ago – we talked about Minimalism as it transcends all facets of life – and most importantly to me – how it’s effecting the way we do business, the future of Social Media, and the face of marketing as we see it today and where it’s headed. The minimalist trend isn’t rising, it’s here, it’s everywhere around us. We’re living in a society that ultimately wants less. Don’t believe me? Look at the IPhone (if you read my post earlier this week you know I don’t have one, but go with me here). 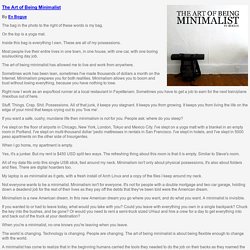 On the top is a yoga mat. Inside this bag is everything I own. These are all of my possessions. Most people live their entire lives in one town, in one house, with one car, with one boring soulsucking day job. The art of being minimalist has allowed me to live and work from anywhere. Sometimes work has been lean, sometimes I've made thousands of dollars a month on the Internet. Right now I work as an expo/food runner at a local restaurant in Fayettenam. Stuff. If you want a safe, cushy, mundane life then minimalism is not for you. I've slept on the floor of airports in Chicago, New York, London, Tokyo and Mexico City. When I go home, my apartment is empty. Yes, it's a junker. All of my data fits onto this single USB stick, tied around my neck. My laptop is as minimalist as it gets, with a fresh install of Arch Linux and a copy of the files I keep around my neck.

Not everyone wants to be a minimalist. The world is changing. Home. Is Minimalism Just Another Trend? - The Blissful Mind. A few months ago, I stumbled upon a video of a girl decluttering your closet (she’s kinda popular, you might have heard of her). 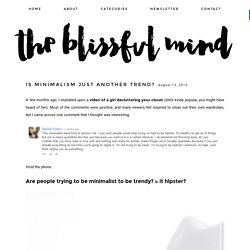 Most of the comments were positive, and many viewers felt inspired to clean out their own wardrobes, but I came across one comment that I thought was interesting: Hold the phone. Are people trying to be minimalist to be trendy? Is it hipster? As someone who likes to simplify everything, I never once considered that it might be a trend. What exactly is minimalism? “The key idea of minimalism is this: Remove what isn’t adding value to your life, to make room for stuff that is.” – Anushka from Into-Mind “Minimalism is a tool to rid yourself of life’s excess in favor of focusing on what’s important—so you can find happiness, fulfillment, and freedom.”

Home Furnishings. This Key Note Market Update analyses the market for home furnishings in the UK over the period from 2010 to 2014, providing forecasts for 2015 to 2019. 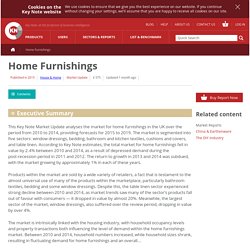 The market is segmented into five sectors: window dressings, bedding, bathroom and kitchen textiles, cushions and covers, and table linen. According to Key Note estimates, the total market for home furnishings fell in value by 2.4% between 2010 and 2014, as a result of depressed demand during the post-recession period in 2011 and 2012. The return to growth in 2013 and 2014 was subdued, with the market growing by approximately 1% in each of these years. Furniture Retailing - UK - December 2014. The Customer Journey for the Home - UK - October 2015. Homewares - UK - January 2015.