Which students get to have privacy? There’s a fresh push to protect student data. 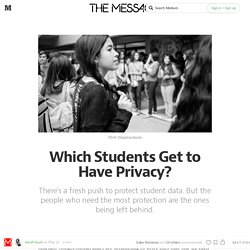 But the people who need the most protection are the ones being left behind. It seems that student privacy is trendy right now. At least among elected officials. Democracy in small states. The Coming Copyright Clash in Higher Education. Higher education finds itself in the crosshairs of American society, and the primary focus is on the debt graduates are incurring in exchange for a college degree. 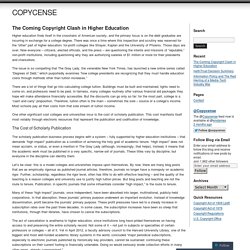 Against perpetual copyright - LessigWiki. In a New York Times op-ed article on May 20, 2007 ("A Great Idea Lives Forever. 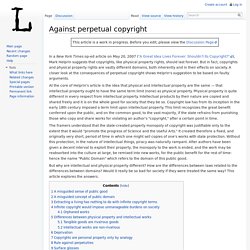 At the core of Helprin's article is the idea that physical and intellectual property are the same — that intellectual property ought to have the same term limit (none) as physical property. The framers understood that the state-created property monopoly of copyright was justifiable only to the extent that it would "promote the progress of Science and the Useful Arts. " But why are intellectual and physical property different? A misguided sense of public good “Private property, including intellectual property, is essential to our way of life. Mr. 3D Printer Creator Withholding Long-Delayed Shipments To Early Backers Over Supposed 'Defamatory' Comments. What I wish Tim Berners-Lee understood about DRM. After Web inventor Tim Berners-Lee's keynote talk at SXSW, he answered a question about the controversial plan to add DRM to next version of HTML. 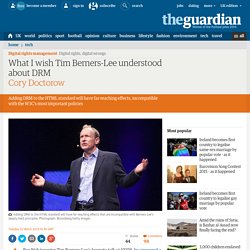 HTML 5, a standard currently under debate at the World Wide Web Consortium (W3C) is the latest battleground in the long-running war over the design of general-purpose computers. Firefox’s adoption of closed-source DRM breaks my heart. Future versions of the open-source Firefox browser will include closed-source digital rights management (DRM) from Adobe, the Mozilla project’s chief technology officer, Andreas Gal, announced on Wednesday. 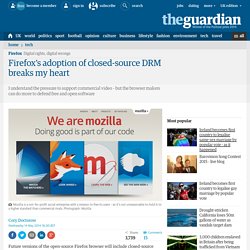 The purpose is to support commercial video streams. But this is a radical, disheartening development in the history of the organisation, long held out as a beacon for the open, free spirit of the web as a tool for liberation. As Gal’s blogpost makes clear, this move was done without much enthusiasm, out of a fear that Firefox (Mozilla’s flagship product and by far the most popular free/open browser in the world) was being sidelined by Apple, Google and Microsoft’s inclusion of proprietary technology to support Netflix and other DRM-encumbered videos in their browsers.

This shift is part of a change in the way that browsers work in general. Mozilla Launches New Version of Firefox wOptional Evil DRM. Love it or hate it, DRM is de rigueur for many online services, including streaming video. 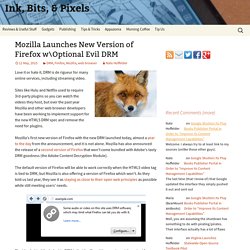 Sites like Hulu and Netflix used to require 3rd-party plugins so you can watch the videos they host, but over the past year Mozilla and other web browser developers have been working to implement support for the new HTML5 DRM spec and remove the need for plugins. Mozilla's first new version of Firefox with the new DRM launched today, almost a year to the day from the announcement, and it is not alone. Mozilla has also announced the release of a second version of Firefox that won’t come bundled with Adobe's tasty DRM goodness (the Adobe Content Decryption Module). The default version of Firefox will be able to work correctly when the HTML5 video tag is tied to DRM, but Mozilla is also offering a version of Firefox which won't. As they told us last year, they see it as staying as close to their open web principles as possible while still meeting users' needs. Cory Doctorow: “We’re all sharecroppers in Google’s fields for the rest of eternity”

The way some pundits frame it, you’re for copyright or against it. 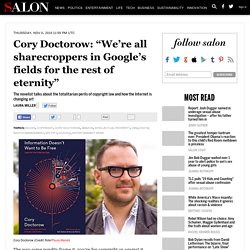 Either you frolic in an endless bounty of free (i.e., stolen) media without a care for its creators (doomed to receive less than a pittance for their hard work and talent), or you stand by the corporate entities who, however futilely, battle pirates and intellectual-property thieves. If you’re an artist, you must side with the heavies or resign yourself to keeping that day job forever because these days no one is willing to shell out for your books, music or films unless they’re forced to.

The novelist and journalist Cory Doctorow, a longtime critic of zealous copyright protection, advocates a middle way, which may come as a surprise to those only superficially acquainted with his writings on technology. How to create good queries in Yosemite's Spotlight. On the surface, searching with Spotlight is pretty straightforward. 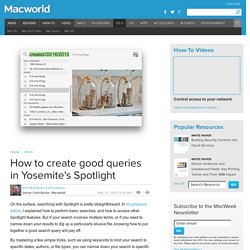 In my previous article, I explained how to perform basic searches, and how to access other Spotlight features. But if your search involves multiple terms, or if you need to narrow down your results to dig up a particularly elusive file, knowing how to put together a good search query will pay off. By mastering a few simple tricks, such as using keywords to limit your search to specific dates, authors, or file types, you can narrow down your search to specific types of data, exclude terms, and more, helping Spotlight to locate exactly what you need.

Can anything curb the dominance of the internet's big guns? The European anti-trust action against Google uses a silly rubric to get at a serious underlying problem. 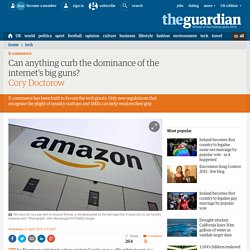 The nominal issue is that Google preferentially directed comparison shoppers to its own e-commerce sites even when they weren’t the cheapest option. This would be sleazy if true. What’s certainly true is that Google’s shopping site has always sucked, is barely used, and is the least worrisome competition question raised by Google’s online dominance. Encryption won't work if it has a back door only the 'good guys' have keys to.

David Cameron has made some headline-grabbing election promises, but none so technically implausible as his vow to eliminate communications tools that “we cannot read” earlier this year. 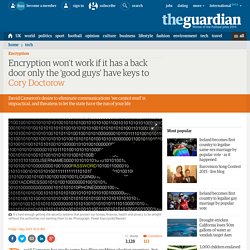 He’s not alone in proposing a ban on effective cryptographic tools. The FBI wants the same thing, and their zeal to protect the state from citizens’ secrecy has even prompted it to alter its exemplary security advice. The suggestion that Americans should encrypt their devices so as to protect their data when they inevitably lose them, have them stolen or throw them away without securely erasing them has been expunged from the FBI’s site. It’s impossible to overstate how bonkers the idea of sabotaging cryptography is to people who understand information security. There are two reasons why this is so.

Poverty, Jail, Media Harassment: The Worst Year of This Mother's Life. (Illustration: Lauren Walker / Truthout; Adapted: Boot lowers, red carnation via Shutterstock) 2014 was the most traumatic year of my life. I was tested mentally, physically and emotionally. The year began as the previous year had ended. My unemployment benefits had run out. My endless job search was yielding nothing promising. Internet Archive Blogs. Last week we announced a new beta version of the archive.org site. The beta is the first step toward inviting people to participate in building libraries together. 2014 beta site Why redesign the site? The Wayback Machine was launched in 2001, and the current look of the site was debuted in 2002 when we added movies, texts, software, and music.

Low-cost 3D printers and crowdfunding suicide - 3D Prototypes and Models. [Authors notes] 1) Thank you readers and media organisations alike for spreading my works with this article. It has been featured on a number of 3DP news websites including Fabbaloo, Inside3DP, Printing 3D Today and 3D Printing Industry. 2) For reference, my article is not referring to specific companies, it is referring to the industry as a whole. This whole thing started around July 2013, when I started watching these companies. My examples are all based on my experiences and using $AUD. 東海村 JCO 放射能漏出事故 (Tokaimura JCO nuclear accident) on Vimeo.

Why All Fonts Are Not Created Equal (video)