US of A in Afghanistan

I fought for nothing: Staggering incompetence, egregious corruption & America’s doomed war in Afghanistan. I’ve been waiting for the fall of Kunduz. 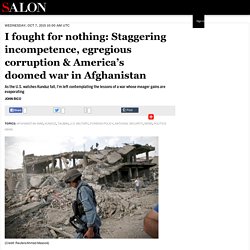 Not Kunduz, specifically, but the fall of a town in Afghanistan of some size and importance. It was my prediction back in 2005, when I left the war, that eventually we would lose it. In the decade since, it was a prediction I felt more comfortable making. The full length of my prediction is this: The fledgling corrupt government that we have supported will increasingly find itself losing cities to the Taliban. Afghanistan: The Making of a Narco State. Helmand Province in southern Afghanistan is named for the wide river that runs through its provincial capital, Lashkar Gah, a low-slung city of shrubby roundabouts and glass-fronted market blocks. 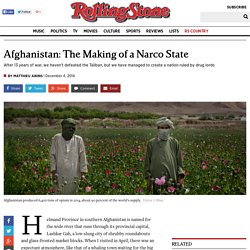 Afghanistan: A Look Back On America's Longest War. U.S. Formally Ends War In Afghanistan. KABUL, Afghanistan (AP) — The United States and NATO formally ended their war in Afghanistan on Sunday with a ceremony at their military headquarters in Kabul as the insurgency they fought for 13 years remains as ferocious and deadly as at any time since the 2001 invasion that unseated the Taliban regime following the Sept. 11 attacks. 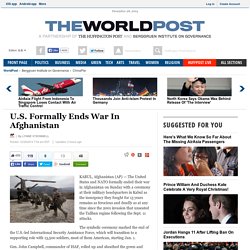 General Indifference Assumes Command Of Afghan War Effort. KABUL, AFGHANISTAN – In a move sure to go unnoticed by basically everyone, U.S. 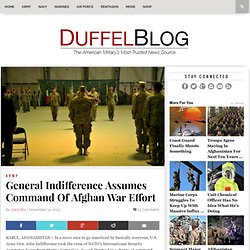 Army Gen. John Indifference took the reins of NATO’s International Security Assistance Force from Marine Corps Gen. Joseph Dunford in a change of command ceremony this morning. “I’d like to say it’s an honor, but the truth is I could generally give a shit,” the generally indifferent Gen. Indifference told an audience of bored but nodding military elites. The apathetic leader’s appointment follows a quiet fall from grace for predecessor Dunford, who sources say was thought to be generally too motivated for the task at hand; this summer, Dunford sparked controversy with the Pentagon by constantly spouting off in the media about mission success, hope for Afghanistan’s future, and all kinds of other silly shit.

“We’ve got a lot of work to do still, but lets not set the bar too high,” Indifference said, signaling his clearer alignment with Washington’s strategic intent. Pentagon Mandates Suicide Prevention Briefings For Afghan Troops. BAGRAM AIR FORCE BASE — Suicide prevention has become a major Pentagon initiative as the U.S. military has struggled with the issue in recent years, and now officials say they will be including Afghan forces also fighting the epidemic. 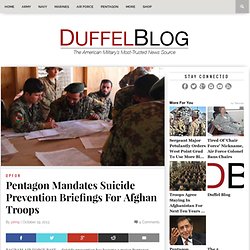 “The recent rash of attacks on Western troops by members of the Afghan forces, known as ‘Green-on-Blue’ attacks, are a cry for help,” said Gen. Martin Dempsey, Chairman of the Joint Chiefs. So far this year, at least 30 Afghan soldiers and police officers have committed suicide by attacking U.S. and NATO troops. White House Closes Afghan Massacre Inquiry, Will Release No Details. Awkwardness Ensues As Taliban & US Outsource Operations To Afghans. A formation of Afghan Army soldiers stand in formation before being dismissed to support the U.S. 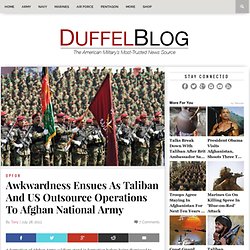 Army and Taliban forces. KANDAHAR, AFGHANISTAN — Controversy engulfed both U.S. Cental Command (CENTCOM) and the Taliban on Monday, when both were revealed to be outsourcing combat operations to the Afghan National Army (ANA). “Talk about awkward,” said a sheepish Maj. John Redfield, spokesman for CENTCOM. CENTCOM were not the only ones dealing with the fallout of the handover of Afghanistan to the ANA for security. Islamist radical rank and file around the globe took to Twitter, Facebook, and message boards to denounce the newly expanded policy, which has apparently been in use for nearly three years. “Make no mistake brothers, the umma is still threatened by the unbeliever,” Mujahid told his followers, insisting that ‘home-grown jihad’ was still useful. “You may call this new breed ‘contractors’,” Mujahid continued. Some members also complained about pay and benefits. What Went Wrong in Afghanistan? Afghanistan: Manufacturing the American Legacy.

“A decade ago, playing music could get you maimed in Afghanistan. 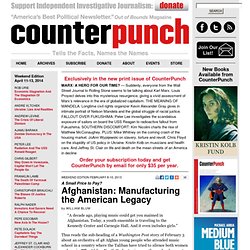 Today, a youth ensemble is traveling to the Kennedy Center and Carnegie Hall. And it even includes girls.” Thus reads the sub-heading of a Washington Post story of February 3 about an orchestra of 48 Afghan young people who attended music school in a country where the Taliban have tried to silence both women and music. The surge in ‘insider’ attacks in Afghanistan. Taliban Raid on NATO Base Inflicted Severe Damage. While other attacks have caused greater loss of life, the assault late Friday at Camp Bastion in Helmand Province, one of the largest and best-defended posts in Afghanistan, was troubling to because the attackers were able to penetrate the base, killing two Marines and causing more than $200 million in damage. 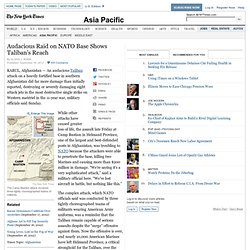 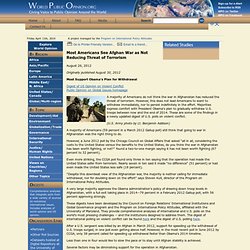