Almost every new EOS model came with an increase in resolution and high ISO range, and when the EOS 7D appeared in late 2009, the company had progressed from 3MP to 18MP, and ISO 1600 to ISO 12800, in just over nine years. But since then Canon's APS-C cameras have all sported variants on the same basic sensor design, to the extent that you could be forgiven for wondering what on earth their engineers were doing all day. Now we know. What is Nikon Thinking? D300S, D7100, D610, D700, D750, Df, D810, D4s Compared.

With the release of the D750, I’m starting to wonder what Nikon is thinking with their lineup. 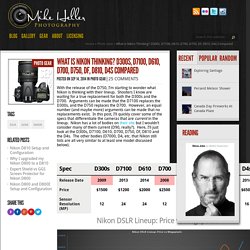 Shooters I know are waiting for a true replacement for both the D300s and the D700. Arguments can be made that the D7100 replaces the D300s, and the D750 replaces the D700. However, an equal number (and maybe more) arguments can be made that no replacements exist. In this post, I’ll quickly cover some of the specs that differentiate the cameras that are current in the lineup. Nikon has a lot of bodies on their site but I wouldn’t consider many of them current (D90, really?). To me, it’s a more clear lineup. 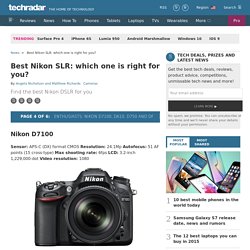 The biggest news at the time was the omission of the low-pass filter and that, whereas the full-frame D800 and D800E cameras were available with or without the filter, the D7100 simply ditched it. Digital Camera Reviews: Nikon D7100. The Nikon D7100 ($1,199.95 direct, body only) is the latest enthusiast-oriented APS-C D-SLR from Nikon. 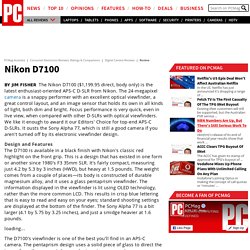 The 24-megapixel camera is a snappy performer with an excellent optical viewfinder, a great control layout, and an image sensor that holds its own in all kinds of light, both dim and bright. Focus performance is very quick, even in live view, when compared with other D-SLRs with optical viewfinders. We like it enough to award it our Editors' Choice for top-end APS-C D-SLRs. It ousts the , which is still a good camera if you aren't turned off by its electronic viewfinder design. Design and Features The D7100 is available in a black finish with Nikon's classic red highlight on the front grip. Loading... The D7100's viewfinder is one of the best you'll find in an APS-C camera. Nikon has packed the D7100 to the gills with control buttons and dials. Above the Fn button is the Pv button.

With so many controls up top and on the front of the body, rear controls are fairly minimal. Nikon D7100 review. Despite some high-profile changes in the Nikon D7100, such as a new sensor, updated AF system, and better build quality, this long-overdue update to the Nikon D7000 doesn't stand out from the crowd as much as it should for the money. 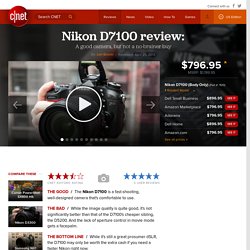 Where once the company had to worry only about Canon with respect to advanced amateur SLRs, Pentax and Sony now produce some killer cameras, sturdily built and capable of shooting great photos with great speed. Plus Nikon's own D5200, while not as fast or as well-built, may be good enough for a lot of folks. Don't get me wrong -- the D7100 is an excellent camera. Nikon D7100 Review - D7100 Overview. D7100 Summary By supercharging the resolution with a 24.1-megapixel CMOS sensor and removing the optical low-pass filter to capture finer detail, the Nikon D7100 delivers the best image quality we've ever seen in a Nikon APS-C-type DSLR. 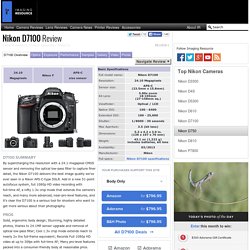 Add in a new 51-point autofocus system, full 1080p HD video recording with full-time AF, a nifty 1.3x crop mode that extends the camera's reach, and many more advanced, near-pro-level features, and it's clear the D7100 is a serious tool for shooters who want to get more serious about their photography. Pros Solid, ergonomic body design; Stunning, highly detailed photos, thanks to 24.1MP sensor upgrade and removal of optical low-pass filter; Cool 1.3x crop mode extends reach to nearly 2x the full-frame equivalent; Records Full 1080p HD video at up to 30fps with full-time AF; Many pro-level features packed into a consumer-friendly body at reasonable price. 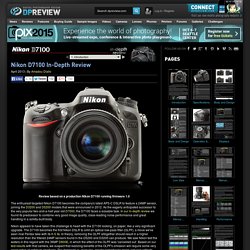 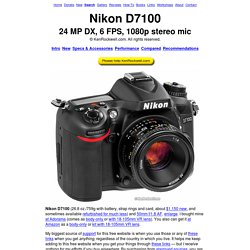 All rights reserved. Intro New Specs & Accessories Performance Compared Recommendations My biggest source of support for this free website is when you use those or any of these links when you get anything, regardless of the country in which you live. It helps me keep adding to this free website when you get your things through these links — but I receive nothing for my efforts if you buy elsewhere. NEW: Nikon D7200. Nikon D750 review. As the long-awaited sucessor to the six-year-old D700, the Nikon D750 delivers admirably. 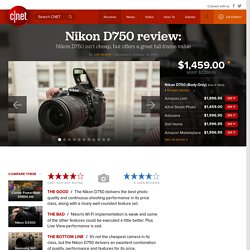 While its $2,300 price tag (£1,800/approximately AU$2,600) inhabits the upper reaches for many enthusiasts, it's a perfect camera for people who are picky about their photographs, who need better high-sensitivity quality than you can get with one of the less-expensive full-frame options or an APS-C-based dSLR, and who need speed for action shooting. Plus, it's a solid option for pros looking for a good value. The camera comes in a couple of official kit configurations. Canon EF-S 18-55mm f/3.5-5.6 IS STM Lens Review.

Canon's EF-S 18-55mm kit lenses have always been small, light and cheap and the latest versions have the very useful image stabilization feature. 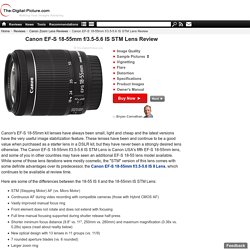 These lenses have been and continue to be a good value when purchased as a starter lens in a DSLR kit, but they have never been a strongly desired lens otherwise.