The Guardian view on Marcus Rashford's triumph: A political masterclass. This Friday, Marcus Rashford will hope to play a starring role for Manchester United, as his team resumes its interrupted Premier League campaign. 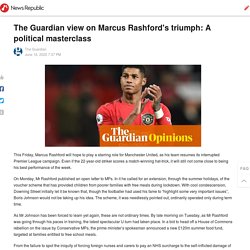 Even if the 22-year-old striker scores a match-winning hat-trick, it will still not come close to being his best performance of the week. On Monday, Mr Rashford published an open letter to MPs. In it he called for an extension, through the summer holidays, of the voucher scheme that has provided children from poorer families with free meals during lockdown. With cool condescension, Downing Street initially let it be known that, though the footballer had used his fame to “highlight some very important issues”, Boris Johnson would not be taking up his idea. The scheme, it was needlessly pointed out, ordinarily operated only during term time. As Mr Johnson has been forced to learn yet again, these are not ordinary times. Many Canadians shocked by U.S. riots, Canada has racism problem too, PM Trudeau says. FILE PHOTO: Canada's Prime Minister Justin Trudeau speaks during a meeting of the special committee on the COVID-19 outbreak in the House of Commons on Parliament Hill in Ottawa, Ontario, Canada May 20, 2020. 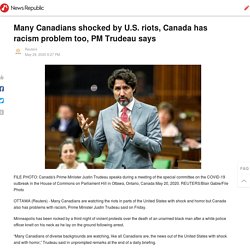 REUTERS/Blair Gable/File Photo OTTAWA (Reuters) - Many Canadians are watching the riots in parts of the United States with shock and horror but Canada also has problems with racism, Prime Minister Justin Trudeau said on Friday. Minneapolis has been rocked by a third night of violent protests over the death of an unarmed black man after a white police officer knelt on his neck as he lay on the ground following arrest. “Many Canadians of diverse backgrounds are watching, like all Canadians are, the news out of the United States with shock and with horror,” Trudeau said in unprompted remarks at the end of a daily briefing. “Anti-black racism - racism - is real. Trudeau’s remarks were a highly unusual commentary on American domestic affairs. Dad Asks: Am I Wrong To Give My Son A Lavish Life Even Though His Mom's Other Kids Don't Get To? When parents separate or divorce, things can get sticky pretty quickly. 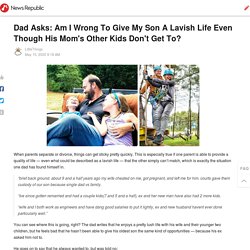 This is especially true if one parent is able to provide a quality of life — even what could be described as a lavish life — that the other simply can’t match, which is exactly the situation one dad has found himself in. “brief back ground. about 9 and a half years ago my wife cheated on me, got pregnant, and left me for him. courts gave them custody of our son because single dad vs family. “Ive since gotten remarried and had a couple kids(7 and 5 and a half), ex and her new man have also had 2 more kids.

“wife and I both work as engineers and have dang good salaries to put it lightly, ex and new husband havent ever done particularly well.” How George W. Bush exposed Trump's biggest failure. How is it possible that I've come partially to respect and admire George W. 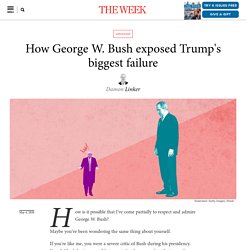 Bush? Maybe you've been wondering the same thing about yourself. If you're like me, you were a severe critic of Bush during his presidency. You disliked the irresponsible tax cuts for the upper class that turned a budget surplus under his predecessor into a deficit. Journalist Accuses 'Emotionally Illiterate' Kate Middleton Of 'Bearing A Grudge' Toward Sussexes. The reported feud between the Cambridges and the Sussexes doesn’t show any sign of slowing down, and more and more journalists are weighing in … and falling on the side of Harry and Meghan. 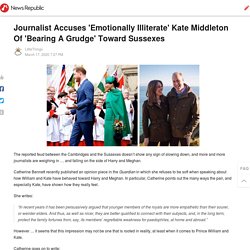 Catherine Bennett recently published an opinion piece in the Guardian in which she refuses to be soft when speaking about how William and Kate have behaved toward Harry and Meghan. In particular, Catherine points out the many ways the pair, and especially Kate, have shown how they really feel. She writes: “In recent years it has been persuasively argued that younger members of the royals are more empathetic than their sourer, or weirder elders. And thus, as well as nicer, they are better qualified to connect with their subjects, and, in the long term, protect the family fortunes from, say, its members’ regrettable weakness for paedophiles, at home and abroad.” However … it seems that this impression may not be one that is rooted in reality, at least when it comes to Prince William and Kate.

Coronavirus is exposing America's shameful selfish streak. During World War II, Americans of all stripes pitched in to win the war against the Axis powers. 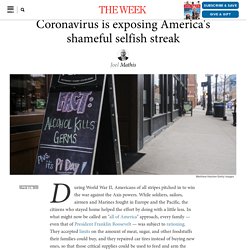 While soldiers, sailors, airmen and Marines fought in Europe and the Pacific, the citizens who stayed home helped the effort by doing with a little less. In what might now be called an "all of America" approach, every family — even that of President Franklin Roosevelt — was subject to rationing. They accepted limits on the amount of meat, sugar, and other foodstuffs their families could buy, and they repaired car tires instead of buying new ones, so that those critical supplies could be used to feed and arm the troops.

Related:  Us doing well for all   -  US of A and those Wascally Terrorists   -  Others of various Views   -  Education   -  Enterprise