Motherboards and CPU Combos in CPU Brand:Intel, Form Factor:MicroATX, Memory Type:DDR3 SDRAM, Socket Type:LGA 1150/Socket H3. Best 1150 Gaming Motherboard and Intel CPU Combo 2015. While many PC builders are looking forward to the release of Intel's Skylake and Broadwell processors, Haswell processors are available now and give you magnificent performance for the money. 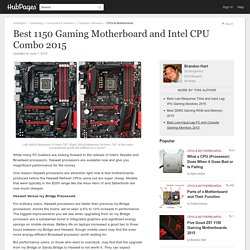 One reason Haswell processors are attractive right now is that motherboards produced before the Haswell Refresh CPUs came out are super cheap. Models that were typically in the $200 range like the Asus Hero VI and Sabertooth are now much cheaper. Haswell Versus Ivy Bridge Processors For ordinary users, Haswell processors are faster than previous Ivy Bridge processors. Across the board, we've seen a 6% to 10% increase in performance. But performance users, or those who want to overclock, may find that the upgrade from Ivy Bridge or Sandy Bridge to Haswell is not worth it.

Types of Haswell Chipsets. Best Intel Gaming Motherboards for the Money 2015. Want to get the right motherboard for your rig? 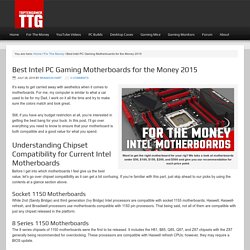 We take a look at motherboards under $50, $100, $150, $200, and $500 and give you our recommendation for each price point. It’s easy to get carried away with aesthetics when it comes to motherboards. For me, my computer is similar to what a car used to be for my Dad. I work on it all the time and try to make sure the colors match and look great. Still, if you have any budget restriction at all, you’re interested in getting the best bang for your buck. Understanding Chipset Compatibility for Current Intel Motherboards Before I get into which motherboards I feel give us the best value, let’s go over chipset compatibility as it can get a bit confusing. Not Specified, Form Factor:MicroATX, Memory Type:DDR3 SDRAM, Motherboard Brand:ASRock. Top Intel X99 Motherboards - Best Motherboards For The Money: June 2015. 2015 Editor Choice MSI's lowest-priced X99 motherboard initially got our attention on price alone, as sellers were listing it for as little as $190 before subtracting a $20 mail-in-rebate. 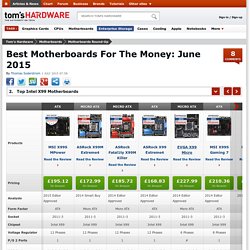 But how much board could you get for only $170 at that time? How about a board that beat every competitor under $250 in support for multiple graphics and PCIe M.2 SSDs? By adding nothing more than a few cheap switches to divert pathways between slots, MSI gave its X99S SLI Plus the ability to run 3-way SLI at x8-x8-x8 mode, plus an x4 M.2 SSD, all from the 28-lane PCIe 3.0 controller of the "crippled" Core i7-5820K. Best Motherboards For The Money: June 2015 - Best Motherboards For The Money: June 2015. A boon to experts and beginners alike, performance standardization allows most of us to choose a motherboard based solely upon its CPU interface, on-board features and price tag. 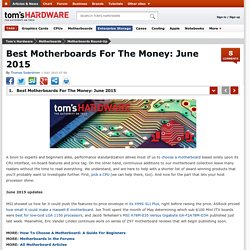 On the other hand, continuous additions to our motherboard collection leave many readers without the time to read everything. We understand, and are here to help with a shorter list of award-winning products that you'll probably want to investigate further. First, pick a CPU (we can help there, too). Best Micro ATX - Compare Specs, Ratings. These measure around 12 in. x 9.6 in. 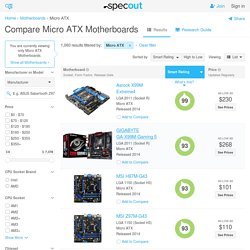 This is the quintessential computer motherboard that fits inside a full-sized “tower” (case). ATX is perhaps the most popular form factor for motherboards. These measure 12 in. x 13 in., which is one of the largest on the market. Typically, these are not for consumers and are usually found on servers. Nonetheless, it is still possible to use for a consumer build, but again, finding a case may be difficult and expensive. These measure about 9.6 in x 9.6 in., and tend to be less expensive than full-sized ATX boards. These measure about 6.7 in. x 6.7 in. There is a bit of ambiguity when it comes to these boards, as each manufacturer has different standards. Custom form factors for specialized cases SSI stands for Server System Infrastructure, meaning that these boards were designed exclusively for use in servers. Gigabyte GA-B75M-D3H intel i3-2120 in Motherboards and CPU Combos. Top 5 Motherboard and CPU Combos. Every PC needs a motherboard and CPU to operate. 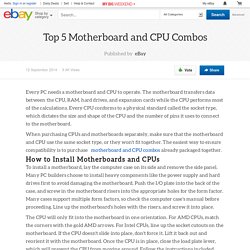 The motherboard transfers data between the CPU, RAM, hard drives, and expansion cards while the CPU performs most of the calculations. Every CPU conforms to a physical standard called the socket type, which dictates the size and shape of the CPU and the number of pins it uses to connect to the motherboard. When purchasing CPUs and motherboards separately, make sure that the motherboard and CPU use the same socket type, or they won't fit together.

The easiest way to ensure compatibility is to purchase motherboard and CPU combos already packaged together. How to Install Motherboards and CPUs To install a motherboard, lay the computer case on its side and remove the side panel. Intel Combos Intel Core i3, i5, and i7 processors are known for their speed and energy efficiency. The Gigabyte GA-B75M-D3H and Intel Core i3-2120 combo is affordable and offers more than enough computing power for home theater PCs. AMD Combos Other Components.