The Curmudgeon: Taylor Swift and the Path of Bruce Springsteen - Paste. On the song “London Boy” from her new album, Lover, Taylor Swift reassures her listeners that even though she’s dating the British actor Joe Alwyn, she still loves America. 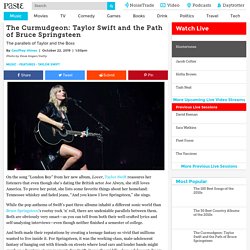 Erica Jeal's classical album of the week. Here’s Sakari Oramo filling in another gap in the British repertoire, one that you probably didn’t even know was there. 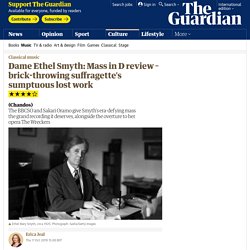 Depending on your favourite story about her, Ethel Smyth is the brick-throwing suffragette conducting her fellow Holloway inmates with a toothbrush, or the bisexual society lady sketched by John Singer Sargent, or the rebellious young woman who defied her father to study composition at the Leipzig Conservatory but who dropped out because she didn’t think the teaching was up to much. Her Mass in D, premiered at the Royal Albert Hall in 1893 but almost absent from the choral society conveyor belt since, is as grand in scope as one might expect from such a woman. Pistol Shots Ring Out in the Barroom Night: Bob Dylan, Hardboiled Crime Writer. Given his status as America’s greatest musical storyteller, if not its all-around greatest songwriter (it’s not like any other rock stars have a Nobel Prize for Literature), it only makes sense that Bob Dylan would have produced his share of songs about crime. 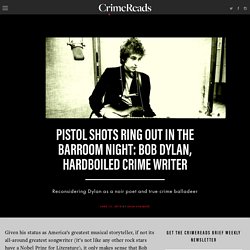 In fact, the subject is one of Dylan’s favorites. He returns to it time and again, and after nearly 60 years of making music, his catalogue is overflowing with lyrical retellings of infamous true-life cases, protest anthems aimed at the entire criminal justice system, gothic murder ballads, outlaw folk tales, and rollicking numbers as hardboiled as the most two-fisted pulp novel. On the occasion of the new Netflix documentary Rolling Thunder Revue: A Bob Dylan Story by Martin Scorsese, here are 10 classic Dylan songs steeped in crime and punishment, justice and retribution, theft and bloodshed, and all other manner of mischief and wrongdoing.

“The Lonesome Death of Hattie Carroll” (1964) Article continues after advertisement. Hootie and the Blowfish Is Returning in 2019. Here's Why We Need to Pay Attention. Lifehacker. Culture & Politics. The trouble with Elvis’s version of “Hound Dog” is not that it is bad. 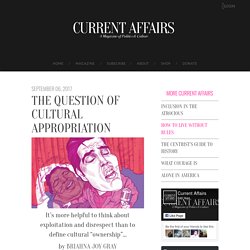 It’s that it doesn’t make any goddamn sense. Big Mama Thornton’s original 1952 version of the song is sleazy and defiant. 9 Classic Country Songs and the Books They Pair With. Culture - Why Revolver is the greatest Beatles album. The best Beatles album? 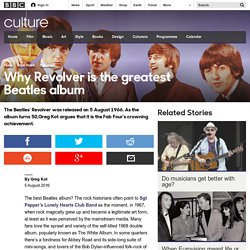 The rock historians often point to Sgt Pepper’s Lonely Hearts Club Band as the moment, in 1967, when rock magically grew up and became a legitimate art form, at least as it was perceived by the mainstream media. Many fans love the sprawl and variety of the self-titled 1968 double album, popularly known as The White Album. 15 Famous Songs With Misunderstood Meanings. Here's a look at some songs that got their meanings twisted and misconstrued—and the original intentions put forth by the artists who wrote them. 10 Classic Albums Rolling Stone Originally Panned. Lester Bangs is one of the most esteemed rock writers in history, but even he didn't quite get Black Sabbath when he heard their first record back in 1970. 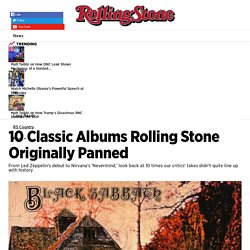 "Over across the tracks in the industrial side of Cream country lie unskilled laborers like Black Sabbath, which was hyped as a rockin' ritual celebration of the Satanic mass or some such claptrap, something like England's answer to Coven. Well, they're not that bad, but that's about all the credit you can give them. The whole album is a shuck – despite the murky song titles and some inane lyrics that sound like Vanilla Fudge paying doggerel tribute to Aleister Crowley, the album has nothing to do with spiritualism, the occult, or anything much except stiff recitations of Cream clichés that sound like the musicians learned them out of a book, grinding on and on with dogged persistence. Second take: Five Stars (2004 Rolling Stone Album Guide) Psychoactive Soundscapes: The Trippiest Albums of 2015. It’s that time of year again: the time where I remind everyone just how rapidly consciousness has been evolving in such an amazingly short period of time. 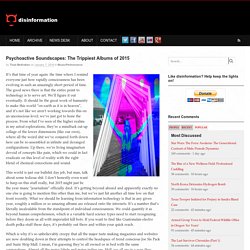 The good news there is that the entire point to technology is to serve art. Lana Del Rey's 'Honeymoon': Everything We Know. "We both know that it's not fashionable to love me/But you don't go 'cause truly there's nobody for you but me," sings Lana Del Rey, sounding unadorned, as if setting ground rules, before being lifted out of reality on silken strings. 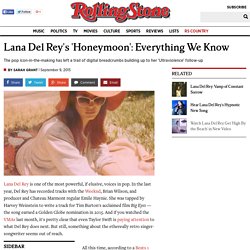 Del Rey recently told Beats 1 that her third LP is inspired by the beach. Poly-graph. Rollingstone. If you wish to launch a humdinger of an argument – and one you might win – sidle up to just about any 1960s rock fan and offer the opinion that it was not the Beatles, the Stones, Pink Floyd, Hendrix, the Velvet Underground or the Byrds who were the key sonic inventors of the decade. 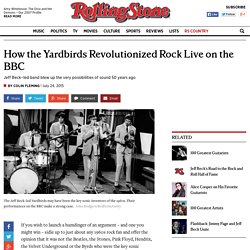 Rollingstone. Van Morrison's new album Duets: Re-Working The Catalogue features vocal collaborations with everyone from Michael Bublé and Steve Winwood to Mavis Staples and even the late Bobby Womack, but they aren't revisiting any classic hits. 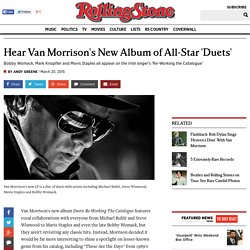 Instead, Morrison decided it would be far more interesting to shine a spotlight on lesser-known gems from his catalog, including "These Are the Days" from 1989's Avalon Sunset, "Born to Sing" from 2012's No Plan B and "Streets of Arklow" from 1974's Veedon Fleece. "I've done duets before, with John Lee Hooker, Tom Jones, Ray Charles, Carl Perkins and Bobby Bland," Morrison said in a statement. "This project was partly about the fun of singing with artists I admire, but also about going back to songs that aren't so well known.

I've wanted to make an album like this since the early 2000s, but it was difficult to pull together the right people. The creative and scheduling sides had to be right. " Duets will be released March 23rd and can be streamed in full below. Complete Fucking Idiot Considers Nikolai Rimsky-Korsakov Russia’s Most Inventive Orchestrator. BOSTON—Making an utter fool of himself in front of company Monday night, local resident and complete fucking moron Tony Penneman actually voiced aloud his opinion that Nikolai Rimsky-Korsakov is “the most inventive orchestrator in the history of Russian classical music,” sources reported.

The 2014 NPR Music Jazz Critics Poll : A Blog Supreme. Steve Lehman edged out Wadada Leo Smith for the top spot in the 2014 NPR Music Jazz Critics Poll. Willie Davis/Courtesy of the artist hide caption itoggle caption Willie Davis/Courtesy of the artist. Best Classical Albums Of 2014 : Deceptive Cadence. The Pulitzer Prize-winning Become Ocean by John Luther Adams is one of NPR Classical's favorite albums of 2014. Cantaloupe hide caption itoggle caption Cantaloupe Most years, Tom Huizenga and I spend a lot of time after Thanksgiving and well into December battling over — or, more truthfully, having many friendly but spirited discussions about — which recordings should comprise our 10 favorites of the year. We each come up with a list of 10, and then we start hammering things out in some amount of exquisite music-nerd agony. Some albums we agree upon, some are our individual picks.

Taylor Swift, Picture-Perfect. Taylor Swift is a profoundly sentimental artist. She is also, of course, a gifted songwriter, a clear, convincing singer, a striking melodist, a hook machine as irresistible as any to grace Top 40 radio, a celebrity about as benevolent as they come, and, let us not forget, a role model worth obsessing over. But before any of that we Taylor Swift fans must acknowledge her penchant for schmaltz, as this earnest young woman who writes directly and openly about her feelings has a saccharine streak about a mile wide. Miles Davis Albums From Worst To Best. Miles Davis was one of the most important musicians of the 20th Century. (1) My Top 100 Jazz Tracks - Emotional Intelligence. Interview: Jan Swafford, Author Of 'Beethoven: Anguish and Triumph' An Illustrated History of Music in Seven Minutes. Vernett Bader Stabs Roommate Who Wouldn't Stop Listening To The Eagles: Cops.

She sure didn't have a peaceful easy feeling. Vernett Bader, 54, is accused of stabbing her live-in ex-boyfriend Monday night because he wouldn't stop listening to The Eagles at their North Charleston, S.C. residence, according to ABC News 4. Police say Bader was watching TV with the man's brother and told her 64-year-old ex to turn his music off. Millennials hate Bruce Springsteen. Every few weeks or so, I’ll be talking to someone at a bar or club or house party, and the conversation will inevitably turn toward Bruce Springsteen.

The exchange is usually as follows: Quit defending the Eagles! They’re simply terrible. One of the sliest and funniest jokes in the Coen brothers film “The Big Lebowski” is the constant conflict between Creedence Clearwater Revival fans and Eagles fans. The film is set in a Los Angeles whose population is clearly delineated by its rock ‘n’ roll allegiances. Robert Christgau: Trying to Understand the Eagles. How Johnny Cash and Bob Dylan saved country music. The musical freedom that Waylon Jennings, Willie Nelson, and Kris Kristofferson yearned for in the late 1960s seemed out of reach in the sterile new office buildings and sagging bungalows that housed the record business on Music Row. The corporate enclave ruled every country artist in town. Except for Johnny Cash, who under the cover of midnight darkness lugged his guitar and his band into the studios of Columbia Records.

Bono: Mascot of Neoliberalism. In 1984 I wrote a hostile (to both music and words) review of U2’s Unforgettable Fire. The Smiths: Better than the Beatles? They lasted just five years. They made just four proper albums. They’ve been ignored by the Rock & Roll Hall of Fame. The American pop charts wanted nothing to do with them. Johannes Brahms. Lana Del Rey, the joke’s on us. Björk puts the rock in rock star. Five Ways Jazz Can Be Punk : A Blog Supreme. Record Label Records > shop. Should Duke Ellington be compared to Bach? Cat Power: 'I'm Not Ashamed To Hear My Voice' An Oral History Of Gay Punk. Neil Young Expands Pono Digital-to-Analog Music Service. Gangnam Style: We need more foreign language pop songs. The End of Jazz - Benjamin Schwarz. The Greatest Recordings in Jazz History - Jennie Rothenberg Gritz.

‘Rite of Spring’ and ‘Jeux’ as Radical Music. Peggy Lee, Life, and the Apocalypse.