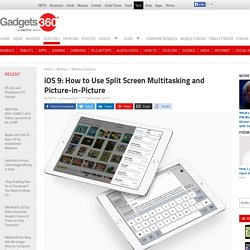 This is a feature that allows you to run two apps side by side, in a split screen view. This is the first time that true multitasking is available on the iPad, which will please productivity enthusiasts. We should point out that Split View is available only on the iPad Air 2, iPad Pro and iPad mini 4 at the moment. With Split View though, you can do something like researching a topic while reading a book, or writing a mail while also skimming through Twitter on the side. Here's how you can enable Split View. (Also see: 20 Awesome Hidden Features of iOS 9) 1) Open an app that supports Split View. 2) Swipe from the right edge of the screen. 3) Swipe downwards from the top on the right hand side (where the secondary app is open). 4) Pick the app you want to run in Split View (such as Safari or Twitter). 5) Now pull the black bar towards the centre of the iPad's screen.

The fast and friendly calendar and reminder app. Most Common iOS 9 Problems You May Meet and Solutions. [Last Updated: Jan. 28, 2016] You know, Apple has officially released iOS 9.2.1 on Jan.19, 2016. iOS 9/9.1 users currently can grab the new software over the air or download it from iTunes. 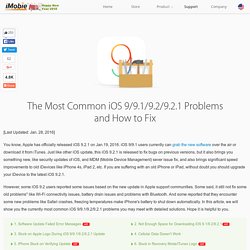 Just like other iOS update, this iOS 9.2.1 is released to fix bugs on previous versions, but it also brings you something new, like security updates of iOS, and MDM (Mobile Device Management) sever issue fix, and also brings significant speed improvements to old iDevices like iPhone 4s, iPad 2, etc. If you are suffering with an old iPhone or iPad, without doubt you should upgrade your iDevice to the latest iOS 9.2.1. However, some iOS 9.2 users reported some issues based on the new update in Apple support communities.

Some said, it still not fix some old problems" like Wi-Fi connectivity issues, battery drain issues and problems with Bluetooth. The latest operating system for Mac has been released on Sept. 30. The Most Common iOS 8/8.2/8.3 Upgrade Problems and Solutions. [Last Updated on Sept. 17, 2015] It has been passed about half a year since Apple official released iOS 8, and the iOS 8's adoption is up to 79.45% on March 11th(according to Mixpanel). 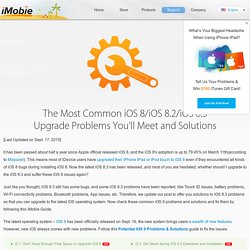 This means most of iDevice users have upgraded their iPhone iPad or iPod touch to iOS 8 even if they encountered all kinds of iOS 8 bugs during installing iOS 8. Doc-0g-8k-docs.googleusercontent. Apple Is Going to Kill the Home Screen. The home screen has always been at the center of the iPhone experience. 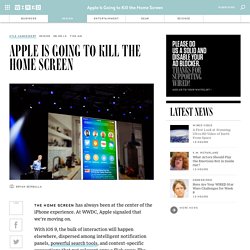 At WWDC, Apple signaled that we’re moving on. With iOS 9, the bulk of interaction will happen elsewhere, dispersed among intelligent notification panels, powerful search tools, and context-specific suggestions that put relevant apps a flick away. The dependable home screen will still exist, but for the first time, it feels secondary. These days, the smartphone experience is just too fast and fluid to be pinned to a grid.

From birth, the home screen was the iPhone’s face to the world. In the early days, the home screen was crucial to the iPhone’s appeal. Click to Open Overlay Gallery But as we became familiar with smartphones, we came to care less about the tidy comforts of the home screen. More recently, we’ve seen interaction shift to the lock screen. Mobile life is too fast to be routed through the home screen. The next version of iOS clearly reflects this reality. All of this represents a big shift. Go Back to Top. iOS 9 release date, features and news. Apple's iOS 9 update is ready to launch tomorrow, and this iPhone and iPad update brings a smarter Siri, public transit directions to Maps, true tablet multitasking and new built-in apps. 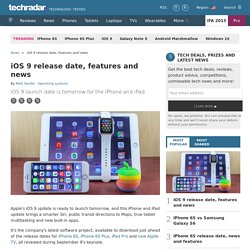 It's the company's latest software project, available to download just ahead of the release dates for iPhone 6S, iPhone 6S Plus, iPad Pro and new Apple TV, all revealed during September 9's keynote. iOS 9, and iOS 9.1 beta for testers, has improved stability, a smaller download size and legacy phone and tablet compatibility. That older iPhone and iPad you have works with this update if it runs iOS 8. New iOS 9 features consist of redesigned built-in apps and a few new ones. There's more multitasking functionality than ever for iPads, while 3D Touch and motion wallpaper are coming for new iPhones.