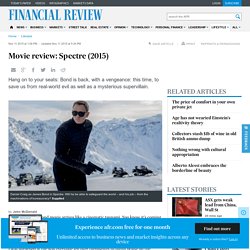 You know it's coming, and that it's completely unstoppable. If all the critics in the world decided that Spectre was rubbish it would make very little impression on the box office. A Bond film, regardless of its merits and demerits, is a 'Must See'. I was surprised at the way everyone fell over themselves to lavish praise on the previous film, Skyfall (2012). It's a trick that must be used sparingly if the producers don't wish to derail this most lucrative of franchises. Some critics have already complained that Spectre – the 24th Bond film and the fourth in which Daniel Craig plays the lead role – doesn't have the same emotional depth as its predecessor.

This story finds Bond going rogue on the trail of a mysterious villain. Fortunately, this impression is soon dispelled. With a little help from his friends Like all Bond super-villains Blofeld will be undone by his megalomaniac posturings. Spectre. Review: ‘Allegiance,’ a Musical History Lesson About Interned Japanese-Americans. Photo “Allegiance,” a new musical about the internment of Japanese-Americans in camps during , could be said to suffer from a problem of divided loyalties, and I’m not referring to its characters. 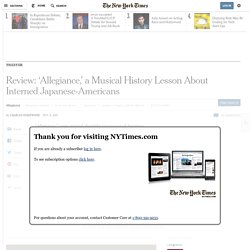 The show wants to illuminate a dark passage in American history with complexity and honesty, but the first requirement of any is to entertain. While well-intentioned and polished, “Allegiance” struggles to balance both ambitions, and doesn’t always find an equilibrium. Following a brief prologue set many years after the central events, the musical, which opened at the Longacre Theater on Sunday and stars George Takei (of “Star Trek” immortality) and Lea Salonga (the Tony-winning star of “Miss Saigon”), begins just as the clouds of war are beginning to gather. The Kimura family, artichoke farmers in California, find their lives upended when the Japanese attack Pearl Harbor (we hear in voice-over the famous “date which will live in infamy” speech) and the United States enters the war.

Mr. Review: ‘On Your Feet!’ Rides the Rhythm of the Estefans. Photo The recipe may be familiar, but the flavor is fresh in “On Your Feet! 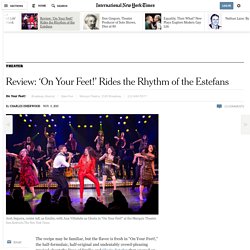 ,” the half-formulaic, half-original and undeniably crowd-pleasing musical about the lives of Emilio and Gloria Estefan that opened on Thursday at the Marquis Theater. To cite the most unusual element: Many a musical could be described as a car crash, but I can’t think of any in which such a calamity figures as a dramatic turning point. Still, it’s no spoiler to say that the show includes the accident that threatened Ms. Estefan’s life and might have ended her career. Rotten Tomatoes: Movies. Teen reviews on books, colleges, music, movies and more. Review Writing: Writing Film & Restaurant Reviews - 21st Century Literacy. Purpose The goals of this unit are (1) to build on the online and offline information gathering skills developed in our initial previous units; (2) to develop students’ observational writing skills; (3) to empower students to participate in our shared culture beyond school; and (4) to improve students’ writing and critical thinking skills by training them in — and giving them an opportunity to practice — basic review writing. 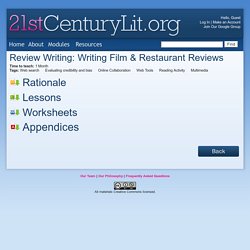 As we go through our 21st century lives we have no choice but to consume, but we can do so intelligently. To that end, this unit also is designed to stretch students’ understanding the power they can have to effect change in their world. Major goals: Research skills · Develop increasingly sophisticated effective Internet search strategies · Develop awareness of and strategies for collecting and sharing evidence · Develop keen observational writing skills Writing skills Learn and practice basic review writing, focusing on: View Appendix - 21st Century Literacy. Robert Greenman is a writer, educator and speaker with major interests in journalism education, vocabulary acquisition, and education in general. 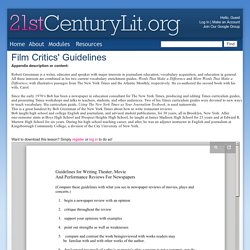 All three interests are combined in his two current vocabulary enrichment guides, Words That Make a Difference and More Words That Make a Difference, with illustrative passages from The New York Times and the Atlantic Monthly, respectively. He co-authored the second book with his wife, Carol. Since the early 1970’s Bob has been a newspaper in education consultant for The New York Times, producing and editing Times curriculum guides, and presenting Times workshops and talks to teachers, students, and other audiences.

Two of his Times curriculum guides were devoted to new ways to teach vocabulary. His curriculum guide, Using The New York Times as Your Journalism Textbook, is used nationwide. James Bond returns to top form in ‘Spectre’ Photo: Jonathan Olley, AP Daniel Craig appears in a scene from the James Bond film, "Spectre. 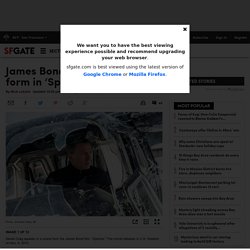