Keeper'n Me by Richard Wagamese. Eleanor & Park by Rainbow Rowell. Eleanor and Park Book Trailer. The Heart and the Fist by Eric Greitens Book Trailer. Goodreads. The Blind Side: Evolution of a Game by Michael Lewis. To Kill A Mockingbird by Harper Lee - Book Review. By Erin Collazo Miller Updated November 25, 2014. 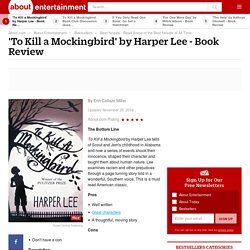 About.com Rating The Bottom Line To Kill a Mockingbird by Harper Lee tells of Scout and Jem's childhood in Alabama and how a series of events shook their innocence, shaped their character and taught them about human nature. Lee examines racism and other prejudices through a page turning story told in a wonderful, Southern voice. Pros Well writtenGreat charactersA thoughtful, moving story Cons Don't have a con Description Two children in depression era AlabamaSeveral outcasts shape the way they see the worldA story about innocence, love, sympathy and human nature Book Review To Kill a Mockingbird by Harper Lee is rightly considered an American classic.

What moves To Kill a Mockingbird to classic status is its morality and ability to draw sympathy out of readers as much today as when it was written in 1960. continue reading below our video Play Video To Kill a Mockingbird deals with heavy issues--racism, oppression, injustice. The Glass Castle by Jeannette Walls. For One More Day by Mitch Albom. I Am Hutterite: The Fascinating True Story of a Young Woman's Journey to Reclaim Her Heritage by Mary-Ann Kirkby. A Hare in the Elephant's Trunk by Jan Coates. Queen of Hearts by Martha Brooks. Fix Me by Rune Michaels. To kill a Mckingbird movie trailer 1962 Video (Author: Harper Lee) Movie of Harper Lee's one and only critically acclaimed novel "To Kill a Mockingbird". 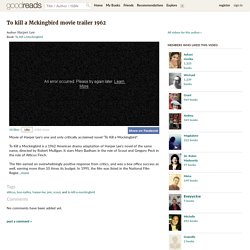 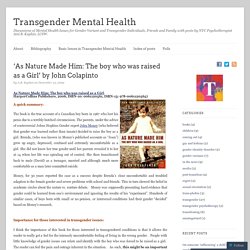 HarperCollins Publishers, 2006, ISBN-10: 0061120561, ISBN-13: 978-0061120565) A quick summary: The book is the true account of a Canadian boy born in 1967 who lost his penis due to a terribly botched circumcision. The parents, under the advice of controversial Johns Hopkins Gender expert John Money (who believed that gender was learned rather than innate) decided to raise the boy as a girl. Brenda, (who was known in Money’s published accounts as “Joan”) grew up angry, depressed, confused and extremely uncomfortable as a girl. Money, for 30 years reported the case as a success despite Brenda’s clear uncomfortable and troubled adaption to the female gender and severe problems with school and friends.