The Ten Commandments of Egoless Programming. The Ten Commandments of Egoless Programming, as originally established in Jerry Weinberg's book The Psychology of Computer Programming: Understand and accept that you will make mistakes. The point is to find them early, before they make it into production. Fortunately, except for the few of us developing rocket guidance software at JPL, mistakes are rarely fatal in our industry, so we can, and should, learn, laugh, and move on.You are not your code. Remember that the entire point of a review is to find problems, and problems will be found. Don't take it personally when one is uncovered.No matter how much "karate" you know, someone else will always know more. Commercial Smart Bear Collaborator Code Reviews & Code Analysis - Collaborator. Collaborator: Full Featured Code Review Built on the foundation of CodeCollaborator, Collaborator is the most full-featured code review product available. 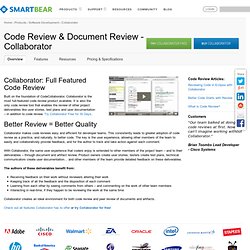 It is also the only code review tool that enables the review of other project deliverables like user stories, test plans and user documentation – in addition to code review. Try Collaborator Free for 30 Days. Better Review = Better Quality Collaborator makes code reviews easy and efficient for developer teams. With Collaborator, the same user experience that coders enjoy is extended to other members of the project team – and to their deliverables – through document and artifact review.

State%20of%20Code%20Review%20eBook%20by%20SmartBear%20%281%29. Software Best Kept Secrets of Code Review Book. Do you view code reviews as a time suck, because they require a heavy-weight, meeting-based process We reject this idea! 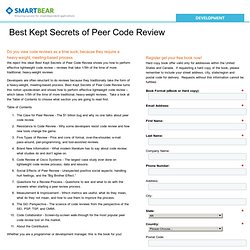 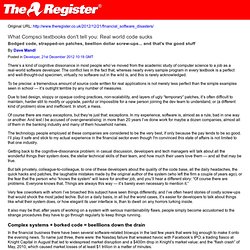 The conflict lies in the fact that, whereas nearly every sample program in every textbook is a perfect and well-thought-out specimen, virtually no software out in the wild is, and this is rarely acknowledged. To be precise: a tremendous amount of source code written for real applications is not merely less perfect than the simple examples seen in school — it’s outright terrible by any number of measures. Due to bad design, sloppy or opaque coding practices, non-scalability, and layers of ugly “temporary” patches, it’s often difficult to maintain, harder still to modify or upgrade, painful or impossible for a new person joining the dev team to understand, or (a different kind of problem) slow and inefficient. In short, a mess. 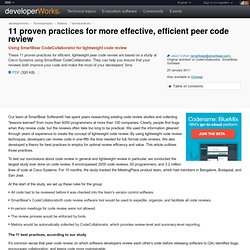 Review Board « ChipLog. Reviewing code can suck The open source world has given developers great tools to make their lives easier. 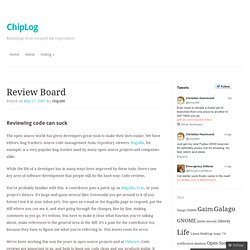 We have editors, bug trackers, source code management tools, repository viewers. Bugzilla, for example, is a very popular bug tracker used by many open source projects and companies alike. While the life of a developer has in many ways been improved by these tools, there’s one key area of software development that people still do the hard way: Code reviews. Automated code reviews with Checkstyle, Part 1. Code reviews are essential to code quality, but no team wants to review tens of thousands of lines of code, or should have to. In this two-part article, ShriKant Vashishtha and Abhishek Gupta show you how to overcome the challenges associated with code reviews by automating them. Find out why Checkstyle is one of the most popular tools used for code review automation, then learn how to quickly enhance its built-in rules with custom ones just for your project. 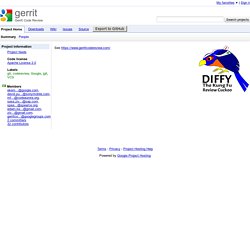 @google.com, david.pu... @sonymobile.com, mf... @codeaurora.org, sasa.ziv... @sap.com, spea... See. Who's Your Coding Buddy? I am continually amazed how much better my code becomes after I've had a peer look at it. 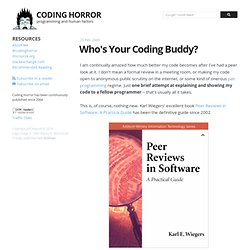 I don't mean a formal review in a meeting room, or making my code open to anonymous public scrutiny on the internet, or some kind of onerous pair programming regime. Just one brief attempt at explaining and showing my code to a fellow programmer -- that's usually all it takes. This is, of course, nothing new. Karl Wiegers' excellent book Peer Reviews in Software: A Practical Guide has been the definitive guide since 2002. My love affair with code reviews. One of the most life-altering events in my move from academia to industry was the discovery of code reviews. 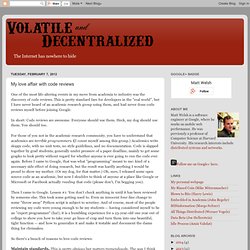 This is pretty standard fare for developers in the "real world", but I have never heard of an academic research group using them, and had never done code reviews myself before joining Google. In short: Code reviews are awesome. Everyone should use them. Heck, my dog should use them. You should too. For those of you not in the academic research community, you have to understand that academics are terrible programmers. Then I came to Google.

Alex Martelli at OSCON: Google's Über Tech Lead On Code Revi. The ugly underbelly of coder culture. By now, it should surprise no one to hear that software development is a bit of a boys' club. 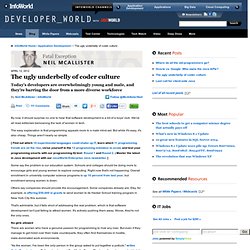 We've all read editorials bemoaning the lack of women in tech. The easy explanation is that programming appeals more to a male mind-set. But while it's easy, it's also cheap. Things aren't nearly so simple. [ Find out which 10 experimental languages could shake up IT, learn which 11 programming trends are on the rise, verse yourself in the 12 programming mistakes to avoid, and test your programming smarts with our programming IQ test: Round 1 and Round 2. | Master the latest in Java development with our JavaWorld Enterprise Java newsletter. ] Some say the problem is our education system. Others say companies should provide the encouragement. That's admirable, but it falls short of addressing the real problem, which is that software development isn't just failing to attract women.

No girls allowed There are women who have a genuine passion for programming to rival any man. The Hick-Hyman Law: An Argument Against Complexity in User Interface Design. There is often a temptation to provide users with a number of options all at once, but research suggests that the number of possible selections can slow users down. 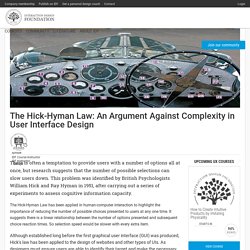 This problem was identified by British Psychologists William Hick and Ray Hyman in 1951, after carrying out a series of experiments to assess cognitive information capacity. The Hick-Hyman Law has been applied in human-computer interaction to highlight the importance of reducing the number of possible choices presented to users at any one time. It suggests there is a linear relationship between the number of options presented and subsequent choice reaction times.

So selection speed would be slower with every extra item. Although established long before the first graphical user interface (GUI) was produced, Hick's law has been applied to the design of websites and other types of UIs.