Getting along with the Police

Technology is driving the new Civil Rights movement. In late May, a police officer took the life of George Floyd — the killing captured on film and distributed wide and far on social media. 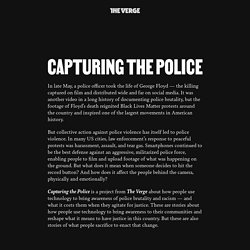 It was another video in a long history of documenting police brutality, but the footage of Floyd’s death reignited Black Lives Matter protests around the country and inspired one of the largest movements in American history. But collective action against police violence has itself led to police violence. In many US cities, law enforcement’s response to peaceful protests was harassment, assault, and tear gas.

Smartphones continued to be the best defense against an aggressive, militarized police force, enabling people to film and upload footage of what was happening on the ground. What America can learn from Nordic police. What is to be done about American police? 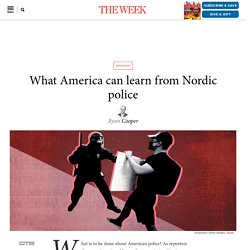 As reporters document continual law enforcement atrocities in response to peaceful protests against police brutality, suddenly the question of how to reform these institutions has gotten close attention. Longstanding calls to at least partly defund the police are being taken more and more seriously, even as some liberals denounce the idea as unrealistic or too radical. The Nordic countries, as usual, have an instructive example for America. These nations have both enormously smaller police departments and prison systems than the United States, and much less violent crime, especially murders.

Emulating their basic approach could allow American cities to cleanse themselves of police abuse and still enjoy lower crime. A recent study from the University of Helsinki examined the Nordic record on homicide. City settles 2010 excessive force lawsuit for $675K. Copyright © 2020 Albuquerque Journal A decade after he was tased and mauled by a police dog during a SWAT situation that erupted after an argument with a friend over beer, Tony Nelson’s protracted legal battle with Albuquerque is over. 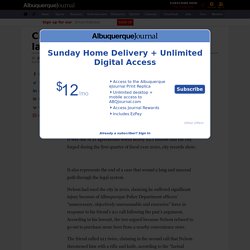 The city recently agreed to pay $675,000 to settle Nelson’s civil rights lawsuit alleging that officers used excessive force in response to the March 2009 incident. It was one of 21 agreements worth nearly $2.1 million that the city forged during the first quarter of fiscal year 2020, city records show. Untitled. A report says a 'preponderance of evidence' supports allegations that he struck a man and a woman. 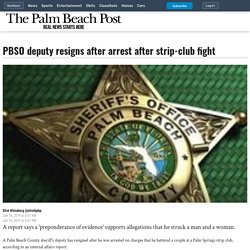 A Palm Beach County sheriff's deputy has resigned after he was arrested on charges that he battered a couple at a Palm Springs strip club, according to an internal affairs report. Dwight Robinson, 33, quit two days after the incident, which occurred bout 1 a.m. July 3 at Scores, on Lake Worth Road near Congress Avenue, the sheriff's office said. Robinson had been with the agency since March 2010. Here are 5 important reasons you should never agree to a police search.

Border Patrol Takes ‘No’ for an Answer at Internal Checkpoints - The Texas Observer. A fascinating video is circulating on the Internet featuring motorists who decline to answer questions at Border Patrol checkpoints miles from the border. 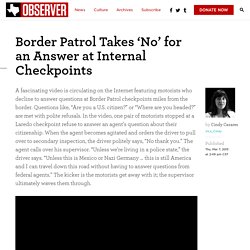 Questions like, “Are you a U.S. citizen?” Or “Where are you headed?” Are met with polite refusals. In the video, one pair of motorists stopped at a Laredo checkpoint refuse to answer an agent’s question about their citizenship. When the agent becomes agitated and orders the driver to pull over to secondary inspection, the driver politely says, “No thank you.” ACLU%20Border%20Rights%20ENGLISH 1. Here are 7 simple steps on how to fight speeding tickets and win — from an ex-cop. It is estimated that in 2014 that there were over 41,000,000 speeding tickets issued in the USA and that over 25% of these were issued in error. 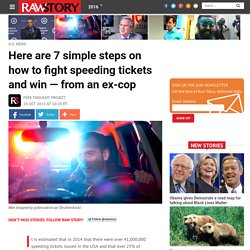 The most common errors include shadowing, RFI inference, cosine angle error, mechanical interference and devices that are out of calibration. But out of these 41,000,000 speeding tickets only 5% challenged their citation in court. "Let me see your I.D." In 24 states police may require you to identify yourself (if they have reasonable suspicion that you’re involved in criminal activity.) 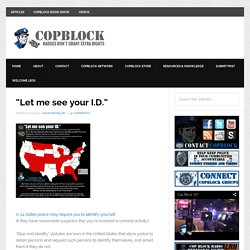 “Stop and identify” statutes are laws in the United States that allow police to detain persons and request such persons to identify themselves, and arrest them if they do not. In the United States, interactions between police and citizens fall into three general categories: consensual (“contact” or “conversation”), detention (often called a Terry stop), or arrest. Terry stop. In the United States, a "Terry stop" is a brief detention of a person by police[1] on reasonable suspicion of involvement in criminal activity but short of probable cause to arrest. 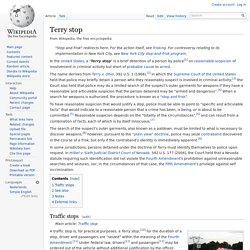 The name derives from Terry v. Ohio, 392 U.S. 1 (1968),[2] in which the Supreme Court of the United States held that police may briefly detain a person who they reasonably suspect is involved in criminal activity;[3] the Court also held that police may do a limited search of the suspect’s outer garments for weapons if they have a reasonable and articulable suspicion that the person detained may be “armed and dangerous”.[4] When a search for weapons is authorized, the procedure is known as a “stop and frisk”. In some jurisdictions, persons detained under the doctrine of Terry must identify themselves to police upon request. In Hiibel v. Traffic stops[edit] Main article: Traffic stop. 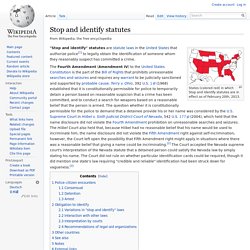 "Stop and identify" statutes are statute laws in the United States that authorize police[1] to legally obtain the identification of someone whom they reasonably suspect has committed a crime. Dear America: Shoot bad cop videos horizontal — and ‘respect the aspect ratio of the ass-whooping’ “Nightly Show” contributor Mike Yard taught a brief seminar on how to shoot a proper video of a black man getting beaten – or worse – by police officers. 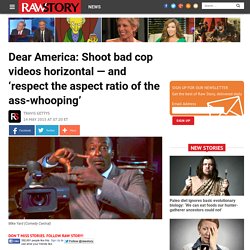 The comedian said his seminar, Police Brutality Video Production 101, would provide “helpful tips for when you know that sh*t is about to go down.” “What’s a bigger tragedy: a black man getting kicked to death by the police, or shooting it vertically?” Yard asked. “Definitely the black man getting kicked to death – however, we can’t do sh*t about that. But what we can do is respect the aspect ratio of the ass-whooping by turning our phone from (vertical) to (horizontal) for maximizing the 16:9 frame.” He showed a video of a police officer roughing up a black man lying on the ground, and said the crime might not be prosecuted because the video was shot vertically – with two black fields on either side of the image taking up most of the screen.

What are my rights at various "checkpoints"? There are four general types of checkpoints you might encounter: DUI checkpoints, US border checkpoints, drug checkpoints, and TSA checkpoints. In a legal sense, they are not all created equal. So depending on which one you encounter, you’ll want to be prepared to flex your rights appropriately. DUI Checkpoints. How to Flex Your Rights During Police Encounters.

Police So Out of Control, this Judge Explains How and Why You should Always Flex Your Rights. FlexYourRights.org Washington, D.C. – A sitting judge, Justice Janice Rogers Brown, has advised citizens on how to deal with police attempting to engage in “fishing expeditions.” Brown urges citizens to address officers “firmly, politely, (and) respectfully,” and to exercise their right to end “voluntary” encounters with police by stating: On Tuesday, Brown, as part of a three-judge panel in the U.S. Court of Appeals for the D.C. Circuit, said members of the Metropolitan Police Department’s Gun Recovery Unit are allowed to approach people on the street. While agreeing that those encounters are legitimate, Brown expressed displeasure with the situation by writing a separate concurring opinion. Training police officers for conflict situations. The deaths of Michael Brown in Ferguson, Missouri, and Eric Garner in New York have caused many people to question how America’s police departments train their officers in the use of force.

But the police department of Richmond, California — historically one of the most violent cities in the San Francisco Bay Area — has undergone a transformation under the supervision of Chief Chris Magnus. His department has found a way to reduce how often officers use lethal force. Since he took command in 2006, crime has gone down in this city of 107,000 residents, 18.5 percent of whom live at or below the poverty level. More significant, so has the use of lethal force by police. In fact, on average, there has been less than one officer-involved shooting per year since 2008.

Resisting Arrest Is Not a Crime. “We need to get around this idea that you can resist arrest,” New York Police Department Commissioner Bill Bratton said last month. Speaking to state Senate committee members, he argued that resisting arrest should be elevated from a misdemeanor to a felony in order to prevent “potential injuries to the officer, to the suspect.” According to a New York Times report, New York City officers made 12,453 arrests in 2013 that included a charge of resisting arrest.

In some cases resisting is the sole charge, the legal equivalent of a virgin birth. More often it’s appended to arrests for other infractions, allowing prosecutors to paint simple acts as prejudicially incriminating. Bratton gets things exactly wrong. Officers expect and demand compliance even when they lack legal authority. Such dysfunctions aren’t limited to Ferguson. Credulity and credibility in police work. “Never waste a good crisis,” or so Rahm Emanuel (President Obama’s former Chief of Staff and now Mayor of Chicago) is reputed to have said.

Well, whether Prince Andrew allegedly had sex with an underage girl at some time in the distant past looks like a crisis for the Royal Household. Open-Carry Activists Police the Police—With Guns Of Their Own. The NYPD's 'Work Stoppage' Is Surreal. A scary culture change: What new law enforcement rhetoric reveals about America. For those who’ve been following the ups and downs (mostly downs) of Bill de Blasio’s relationship with the NYPD, there was little about the officers’ response to the murder of two of their colleagues that was surprising. Www.jjay.cuny.edu/Telep_Weisburd.pdf. The Police in America Are Becoming Illegitimate. 3 Years After This City Made Cops Wear Cameras, Here’s What Happened to Police Violence. As the citizens of Ferguson, Missouri, take stock of damage after the raucous protests, looting, arson and gunfire that followed a grand jury's decision to clear Officer Darren Wilson in the shooting death of unarmed teen Michael Brown, people around the country are asking: How do we solve the problem of police brutality?

A California suburb may have the answer. “Just do what I tell you”: Why cops’ tasing people is nothing to laugh at. And What's Been Filmed In Recent Months Is Appalling. Attorney shuts down police stop of black handyman: ‘Now please leave our neighborhood’ A recent videotaped incident in Washington, D.C., highlights the way race and class matter in police interactions with residents. The Chain of Obedience. A DWI offer you can’t refuse. 10 tips and tactics for investigating Sovereign Citizens. Law enforcement officers across the country are experiencing a growing number of contacts with Sovereign Citizens — individuals and groups who possess a strong anti-government ideology. NYPD: "You Have No Right To Film!" Abusive, Camera-Phobic Mall Cop Picks Fight With Wrong Woman.