Critical Thinking. Quiet Ego. Why Wait? The Science Behind Procrastination – Association for Psychological Science. Believe it or not, the Internet did not give rise to procrastination. 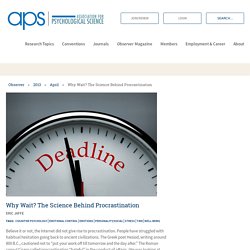 People have struggled with habitual hesitation going back to ancient civilizations. The Greek poet Hesiod, writing around 800 B.C., cautioned not to “put your work off till tomorrow and the day after.” The Roman consul Cicero called procrastination “hateful” in the conduct of affairs. (He was looking at you, Marcus Antonius.) And those are just examples from recorded history. What’s become quite clear since the days of Cicero is that procrastination isn’t just hateful, it’s downright harmful. Amazon. Why We Procrastinate. This article is not meant to diagnose or provide medical advice—that responsibility lies with physicians. 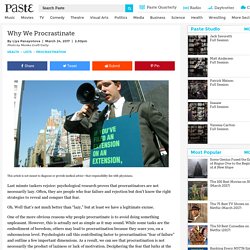 Last minute taskers rejoice: psychological research proves that procrastinators are not necessarily lazy. Often, they are people who fear failure and rejection but don’t know the right strategies to reveal and conquer that fear. Oh. Well that’s not much better than “lazy,” but at least we have a legitimate excuse. One of the more obvious reasons why people procrastinate is to avoid doing something unpleasant. According to one of the most popular therapeutic approaches, called cognitive-behavioral therapy (CBT), we all have certain basic assumptions about ourselves, either positive or negative, known as core beliefs.

Mentally Owning a Book – The Mission – Medium. Reading is one of the key ways we learn new things. 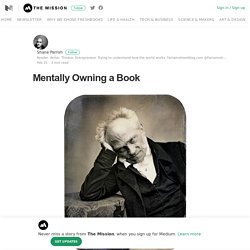 And while it’s easy to pick a book up and turn the pages, it’s harder to actually understand and apply the lessons. The Top 3 Most Effective Ways to Take Notes While Reading. Before you get started: Filter the book by reading the preface, index, table of contents, and inside jacket. 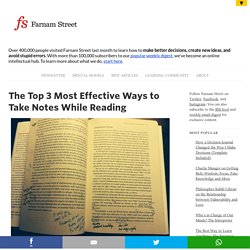 This tells you where the author is going to take you and, importantly, the vocabulary they will use. There are three steps to effectively taking notes while reading: Read to Lead: How to Digest Books Above Your “Level” I shouldn’t be able to read most of the books on my shelf. 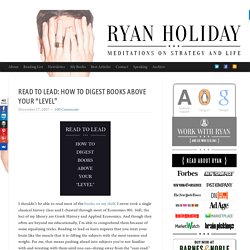 I never took a single classical history class and I cheated through most of Economics 001. Still, the loci of my library are Greek History and Applied Economics. How And Why To Keep A “Commonplace Book” The other day I was reading a book and I came across a little anecdote. 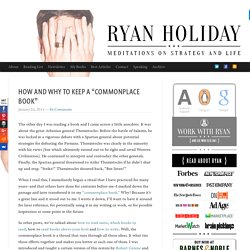 It was about the great Athenian general Themistocles. Before the battle of Salamis, he was locked in a vigorous debate with a Spartan general about potential strategies for defeating the Persians. Themistocles was clearly in the minority with his views (but which ultimately turned out to be right and saved Western Civilization). Understanding (and Refuting) the Arguments for God. THE RATIONALIST ASSOCIATION OF NSW INC. Four Simple Positive Psychology Interventions That Could Change Your Life. Positive Psychology (PP) is generally considered to be a subfield of psychology. 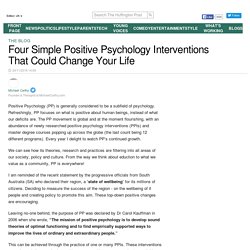 Refreshingly, PP focuses on what is positive about human beings, instead of what our deficits are. The PP movement is global and at the moment flourishing, with an abundance of newly researched positive psychology interventions (PPIs) and master degree courses popping up across the globe (the last count being 12 different programs). Every year I delight to watch PP’s continued growth. We can see how its theories, research and practices are filtering into all areas of our society, policy and culture. 16 Audio Books That Will Improve The Way You Live, Work And Love. If there's an area in your life that could do with some improvement, a good audio book might be able to steer you in the right direction. 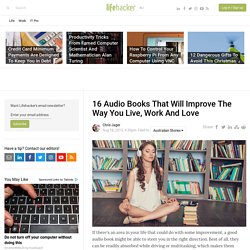 Best of all, they can be readily absorbed while driving or multitasking, which makes them perfect for people with busy schedules (i.e. - nearly all of us.) We asked Amazon's digital audiobook arm Audible to share some of its best-selling self-improvement titles. Here are their picks. Audio book picture from Shutterstock The following audio books cover a wide gamut of topics, from mastering creative thinking to maneuvering the corporate ladder as a woman.

Blink by Malcolm Gladwell. Remembering More of Everything: The Memory Palace. “When information goes ‘in one ear and out the other,’ it’s often because it doesn’t have anything to stick to.”— Joshua Foer That’s a quote from the book Moonwalking with Einstein, the fascinating account of Joshua Foer’s journey investigating memory. 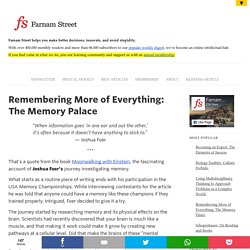 What starts as a routine piece of writing ends with his participation in the USA Memory Championships. While interviewing contestants for the article he was told that anyone could have a memory like these champions if they trained properly. Intrigued, Foer decided to give it a try. The journey started by researching memory and its physical effects on the brain. Foer found research where MRI was used to compare the memory specialists’ brains to those of a control group. Surprisingly, when the mental athletes were learning new information, they were engaging regions of the brain known to be involved in two specific tasks: visual memory and spatial navigation. The Memory Palace. Essential Life Skills.net. Therapy for Anxiety Disorders: Treating Anxiety with CBT and Other Therapy Options.