The Danger of Ignoring Your Surroundings. Predictive Policing Software. Authorities are harvesting your data to calculate your "threat score." Leaked Memo Reveals Soros Plan for Federally Controlled Police. A leaked document from George Soros’s Open Society Foundations exposes the billionaire’s level of involvement in attempting to build what his organization describes as a “national movement” to reform local police forces across the U.S. 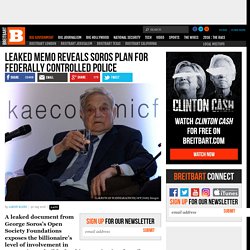 The reform largely consists of federal guidelines for local police forces. The document identifies an opportunity in the police killings of African-American men in Ferguson, Staten Island, North Charleston, and Baltimore. It relates that the U.S. contingent of Open Society held a planning meeting titled, “Police Reform: How to Take Advantage of the Crisis of the Moment and Drive Long-Term Institutional Change in Police-Community Practice.” The extensive memo further documents that Soros-financed groups and personalities influenced President Obama’s Task Force on 21st Century Policing, which last May released a final report consisting of 60 recommendations providing guidance to localities on how to modify policing practices. The Pentagon’s Law of War Manual: A Recipe for Total War and Military Dictatorship. The Pentagon’s Law of War Manual: A Guidebook for Violating International and Domestic Law.

The new US Department of Defense Law of War Manual is essentially a guidebook for violating international and domestic law and committing war crimes. 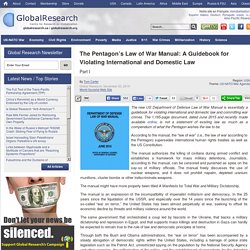 The 1,165-page document, dated June 2015 and recently made available online, is not a statement of existing law as much as a compendium of what the Pentagon wishes the law to be. According to the manual, the “law of war” (i.e., the law of war according to the Pentagon) supersedes international human rights treaties as well as the US Constitution. The manual authorizes the killing of civilians during armed conflict and establishes a framework for mass military detentions. Journalists, according to the manual, can be censored and punished as spies on the say-so of military officials.

The manual freely discusses the use of nuclear weapons, and it does not prohibit napalm, depleted uranium munitions, cluster bombs or other indiscriminate weapons. The manual might have more properly been titled A Manifesto for Total War and Military Dictatorship. Canadians have united to reject fear and stop Bill C-51. Will the government listen? This article by our David Christopher was originally posted in Common Ground Magazine and in Rabble It's rare in Canadian politics to see intense public interest in government legislative proposals -- let alone to see Canadians take to the streets in the tens of thousands to protest a piece of legislation by name. 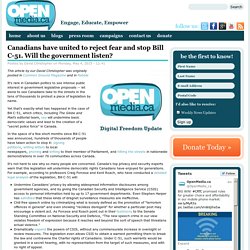 Yet that's exactly what has happened in the case of Bill C-51, which critics, including The Globe and Mail's editorial team, say will undermine basic democratic values and lead to the creation of a "secret police force" in Canada. In the space of a few short months since Bill C-51 was announced, hundreds of thousands of people have taken action to stop it: signing petitions, writing letters to local newspapers, phoning and writing to their member of Parliament, and hitting the streets in nationwide demonstrations in over 70 communities across Canada. It's not hard to see why so many people are concerned. So it's no surprise that Canadians are worried. » Beyond Denial: Preparations for Martial Law in America Alex Jones' Infowars: There's a war on for your mind!

Is Obama Trying to Cause Civil Unrest in America? Administration chooses to announce controversial amnesty plan at same time as Officer Wilson verdict Paul Joseph Watson Prison Planet.com November 20, 2014 By choosing to announce his extremely controversial executive agenda on amnesty at almost precisely the same time the verdict in the shooting death of Michael Brown is expected to be announced, President Barack Obama risks causing civil unrest in America. 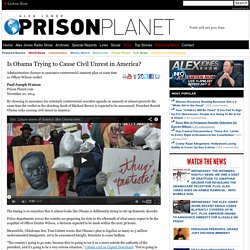 The timing is so senseless that it almost looks like Obama is deliberately trying to stir up domestic disorder. Police departments across the country are preparing for riots in the aftermath of what many expect to be the acquittal of Officer Darren Wilson, a decision expected to be made within the next 36 hours. Meanwhile, Oklahoma Sen. “The country’s going to go nuts, because they’re going to see it as a move outside the authority of the president, and it’s going to be a very serious situation,” Coburn said on Capital Download. Facebook @ FOLLOW Paul Joseph Watson @ Print this page.

CHARLES HURT: America faces most dangerous two years in 150 years. If President Obama suffered a “shellacking” in the 2010 elections, then what he endured Tuesday night was nothing short of a vicious gangland beatdown the likes of which have rarely been seen before in the history of electoral politics. 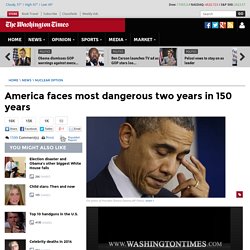 This, of course, is a wonderful and well-deserved outcome. But beware: America now enters the two most dangerous years of her existence — or certainly the most dangerous since the Great Depression and possibly going all the way back to the Civil War. PHOTOS: Conservatives in Hollywood: Celebrities who lean right Not to dismiss the promising results of Tuesday’s election.

Voters clearly and forcefully rejected the party, politics and policies of President Obama. His grand visions of mighty government ruling unchecked over desperate ghettos have been snuffed out.