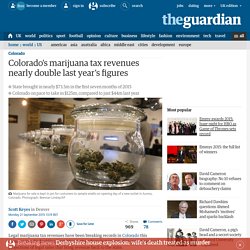 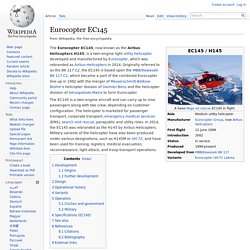 Originally referred to as the BK 117 C2, the EC145 is based upon the MBB/Kawasaki BK 117 C1, which became a part of the combined Eurocopter line-up in 1992 with the merger of Messerschmitt-Bölkow-Blohm's helicopter division of Daimler-Benz and the helicopter division of Aérospatiale-Matra to form Eurocopter. The EC145 is a twin-engine aircraft and can carry up to nine passengers along with two crew, depending on customer configuration. The helicopter is marketed for passenger transport, corporate transport, emergency medical services (EMS), search and rescue, parapublic and utility roles. Metropolitan Police Marine Policing Unit. The Gabriel Franks, a Fast Response Targa 31 boat of the Metropolitan Police Marine Policing Unit, named after the first British marine police officer to be killed in the line of duty The Marine Policing Unit (MPU) (previously named Thames Division, then the Marine Support Unit) is a Central Operations (CO) branch of London's Metropolitan Police Service. 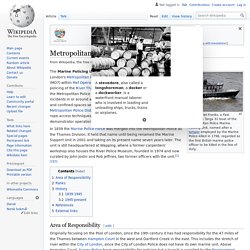 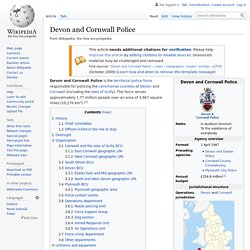 Overview[edit] This is the largest police force area in England by geographical area covered, and the fifth largest in the United Kingdom. The total population of the force area is approximately 1.5 million. The force also has to cope with an influx of around 11 million visitors to its area during the average year. Western Australia Police. The Western Australia Police provides police services throughout the state of Western Australia, an area of 2.5 million square kilometres, the world's largest non-federated area of jurisdiction, with a population of only 2.4 million, of which 1.9 million reside in the Perth Metropolitan Region. 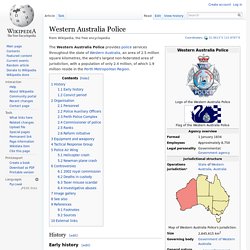 History[edit] Early history[edit] Early colonial policemen were recruited by magistrates and worked part-time. They were paid only for specific tasks, such as one shilling for serving a summons. MBB/Kawasaki BK 117. Development[edit] The BK117 was a joint development between MBB and Kawasaki based on an agreement made on 25 February 1977. 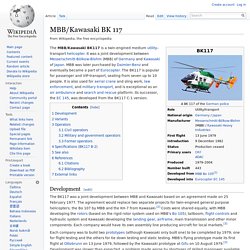 The agreement would replace two separate projects for twin-engined general purpose helicopters; the Bo 107 by MBB and the KH-7 from Kawasaki.[2] Costs were shared equally, with MBB developing the rotors (based on the rigid rotor system used on MBB's Bo 105), tailboom, flight controls and hydraulic system and Kawasaki developing the landing gear, airframe, main transmission and other minor components. Each company would have its own assembly line producing aircraft for local markets.[3] Each company was to build two prototypes (although Kawasaki only built one) to be completed by 1979; one for flight testing and the others for tie down testing and static testing. A single BK117 A-3 (c/n 7106) was leased by the Canadian Forces Air Command for a test program and designated as the CH-143.

Japanese Production: BK117 A-1 to C-1: c/n 1001-1112 = 111 + P-3/P-5 prototype. Landespolizei. Landespolizei (German pronunciation: [ˌlandəspoliˈt͡saɪ], State police) is the term used to refer to all police of any one of the states of Germany.[1] History[edit] The Landespolizei in the meaning of today can trace its origins to the late 19th century Germany, when Germany united into a single country in 1871, under Otto von Bismarck. 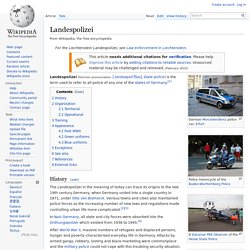 Various towns and cities also maintained police forces as the increasing number of new laws and regulations made controlling urban life more complicated.[2][3] In Nazi Germany, all state and city forces were absorbed into the Ordnungspolizei which existed from 1936 to 1945.[4] After World War II, massive numbers of refugees and displaced persons, hunger and poverty characterised everyday life in Germany. Water police. Helsinki Police Department patrol Boats 491, 192, and 493 in front of ice breaker Voima at Katajanokka, Helsinki, Finland. 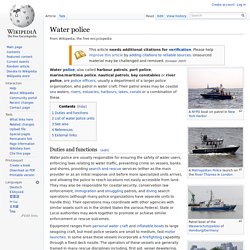 It is part of the National Gendarmerie and is trained to perform counter-terrorist and hostage rescue missions in France or anywhere else in the world. Global Electric Motorcars. Global Electric Motorcars (GEM), a wholly owned subsidiary of Polaris Industries,[1] is a U.S. manufacturer in the low-speed vehicle category, producing neighborhood electric vehicles (NEVs) since 1998 and has sold more than 50,000 GEM battery-electric vehicles worldwide as of mid 2014.[2] Until June 2011, GEM was owned by Chrysler Group. 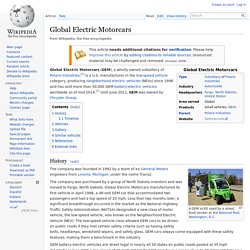 History[edit] The company was founded in 1992 by a team of ex-General Motors engineers from Livonia, Michigan, under the name Trans2. The company was purchased by a group of North Dakota investors and was moved to Fargo, North Dakota. Global Electric Motorcars manufactured its first vehicle in April 1998, a 48-volt GEM car that accommodated two passengers and had a top speed of 20 mph. Technology police. Forensics. New York City Sheriff's Office. New York State Police. A Troop L patrol car in New York City, in September 2010.

New York City Police Department. The NYPD has a broad array of specialized services, including the Emergency Service Unit, K-9, harbor patrol, air support, bomb disposal, counter-terrorism, criminal intelligence, anti-gang, anti-organized crime, narcotics, public transportation and public housing; The New York City Transit Police and New York City Housing Authority Police Department were fully integrated into the NYPD in 1995. According to the department, its mission is to "enforce the laws, preserve the peace, reduce fear, and provide for a safe environment. " In June 2004, there were about 40,000 sworn officers plus several thousand support staff; in June 2005, that number dropped to 35,000. As of December 2011, it had increased to slightly over 36,600 with the graduation of a class of 1,500 from the New York City Police Academy.

Organizations[edit] National Agencies[edit] Law enforcement in the United Kingdom. Law enforcement in Germany. Law enforcement agency. In North American English, a law enforcement agency (LEA) is a government agency responsible for the enforcement of the laws. Outside North America, such organizations are called police services. In North America, some of these services are called police while others have other names (e.g. sheriff's department; investigative police services in the United States are often called bureaus (e.g. Heckler & Koch MP5. The Heckler & Koch MP5 (from German: Maschinenpistole 5, "machine pistol model 5") is a 9mm submachine gun of German design, developed in the 1960s by a team of engineers from the German small arms manufacturer Heckler & Koch GmbH (H&K) of Oberndorf am Neckar. There are over 100 variants of the MP5,[4] including a semi-automatic version.

Glock. Despite initial resistance from the market to accept a "plastic gun" due to durability and reliability concerns, and fears that the pistol would be "invisible" to metal detectors in airports, Glock pistols have become the company's most profitable line of products, commanding 65% of the market share of handguns for United States law enforcement agencies as well as supplying numerous national armed forces and security agencies worldwide.[6] Glocks are also popular firearms amongst civilians for recreational/competition shooting, home/self defense and concealed/open carry.[7]